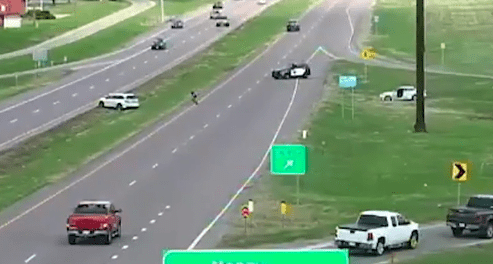 BURNSVILLE, Minn. — Black Lives Matter protesters in Minnesota dropped to a knee and set off to march over a fatal police shooting — only to return when they learned it was a white carjacker who had fired at police, according to reports.

Dozens of people protesting outside Gov. Tim Walz’s mansion in St. Paul on Sunday were filmed by Fox 9 reporter Mitti Hicks as they knelt for a moment of silence over initial rumors about Sunday’s 3 p.m. fatal shooting, New York Post reported.

“Protestors kneel after hearing there was an officer-involved shooting in Burnsville moments ago,” Hicks tweeted of the wild, caught-on-camera armed carjacking in the suburbs.

“This information HAS NOT been confirmed but this group says they’re heading there,” Hicks said.

The suspect who was killed is believed to be a white man in his 20s who had stolen a car from a woman at gunpoint — then repeatedly shot at officers as they chased him, Burnsville police said.

Traffic camera footage shared by KARE11 showed the suspect leaping out of the still-moving stolen car, then running into the road and seemingly pointing his gun at an approaching SUV before he was shot by “multiple” pursuing officers, police said.

Person pursued by police jumps out of moving car, appears to point a gun at another car on Highway 13 at I-35W in Burnsville. Runs into grass median and goes down. Working on details. Hwy 13 closed both directions. #BREAKING @kare11 pic.twitter.com/B0GUgUunAT

The BLM marchers, riled by the local police-involved deaths of George Floyd and Daunte Wright, soon appeared to get word that the latest shooting was not one fit for protest, the Post reported.

The protesters turned back and instead headed to Brooklyn Center — the city where Wright died — “because they need more information about what happened in Burnsville first,” Hicks said in an update about an hour after her initial video.

Word of their planned protest after a rush to judgment quickly had the protesters ripped online.

“For an armed carjacker?????? Are people this stupid????” one person replied to Hicks’ video, while Amanda Felske said that the group planned to “just immediate loot /riot!!” without getting the facts.

Brendan Hartmann, meanwhile, pointed out that the latest suspect had been shooting at police.

“Are they kneeling for the amazing work these officers did to keep the community safe from a mad man with a GUN,” he asked of the protest group.

The Burnsville carjacker has yet to be identified. No police were injured and there were no reports of any of the suspect’s victims being wounded, either.

“All Burnsville Police Officers wear body cameras and camera data will be handled by the Minnesota Bureau of Criminal Apprehension (BCA) who will lead the investigation,” the department said.

Carjacker fatally shot by Minnesota police during exchange of gunfire