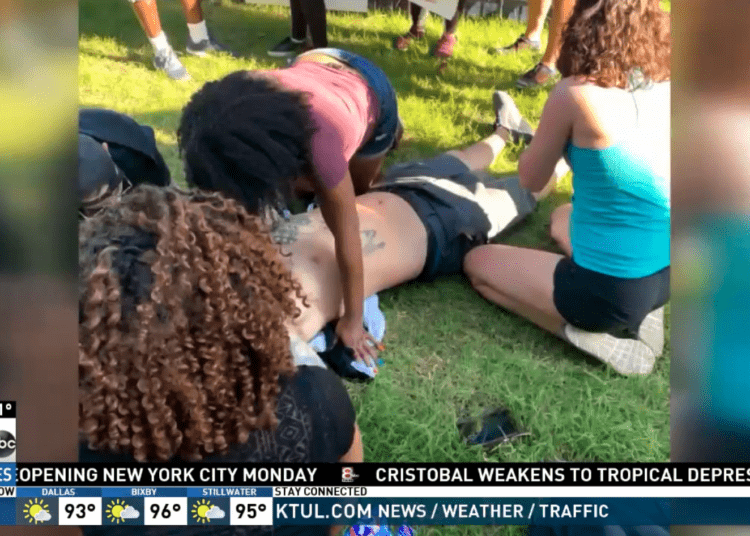 Thomas “Ryan” Knight was left paralyzed after he fell from an Interstate 244 overpass near downtown Tulsa in 2020. (YouTube)

TULSA, Okla. – A man who fell from an overpass and was paralyzed during a 2020 Black Lives Matter protest in Tulsa is placing the blame by filing a lawsuit against the city of Tulsa, the Oklahoma Highway Patrol and the driver of a pickup truck in a federal lawsuit.

Thomas “Ryan” Knight, 34, is the plaintiff in the suit. He claims the Tulsa Police Department, the OHP, the unidentified driver of a pickup pulling a horse trailer and others for creating the situation that led to his injuries, Tulsa World reported.

Knight was participating in a BLM rally that blocked roadways with hoards of people on May 31, 2020, when he fell about 20 feet from an Interstate 244 overpass near downtown Tulsa.

As a result of his fall, Knight broke multiple spinal bones and is now paralyzed from the waist down, according to the lawsuit.

In the civil action filed Monday in Tulsa federal court, Knight blames the Tulsa Police Department, the Oklahoma Highway Patrol and employees of both agencies for his fall.

“But for the deliberate indifference of the TPD, OHP and their employees, plaintiff would have never been placed in the dangerous situation on I-244 and ultimately knocked off the overpass,” Knight’s lawsuit claims.

Knight doesn’t stop with the police. The lawsuit also blames the unidentified pickup truck driver for creating the circumstances that led to his fall from the overpass, according to Tulsa World.

The BLM march took place in Tulsa’s Greenwood District following the death of George Floyd. Knight was among hundreds who participated.

The lawsuit blames TPD for “creating the situation” that placed protesters in “direct and imminent danger by directing the crowd onto I-244.”

Hundreds of protesters were on I-244 when a pickup pulling a horse trailer attempted to drive through the mob. Videos show the crowd angrily blocking the truck as the driver allegedly placed a firearm on the dashboard while his vehicle and horse trailer were being pummeled by dozens of people.

Once the pickup slowly made its way through the angry crowd, the truck headed toward a group of troopers who instructed the driver to meet them at another location to get him away from “agitated” protesters, an OHP spokesperson said at the time, according to Tulsa World.

The civil complaint alleges that the pickup driver, who has yet to be publicly identified, was negligent when he brandished the firearm—even though any rational person would fear for their safety given the gauntlet of protesters who were blocking and striking his vehicle.

The lawsuit blames the OHP for allowing the pickup to reach the mob blocking the highway.

The city of Tulsa and Oklahoma Highway Patrol, through public information staff at both entities, declined to comment due to pending litigation.