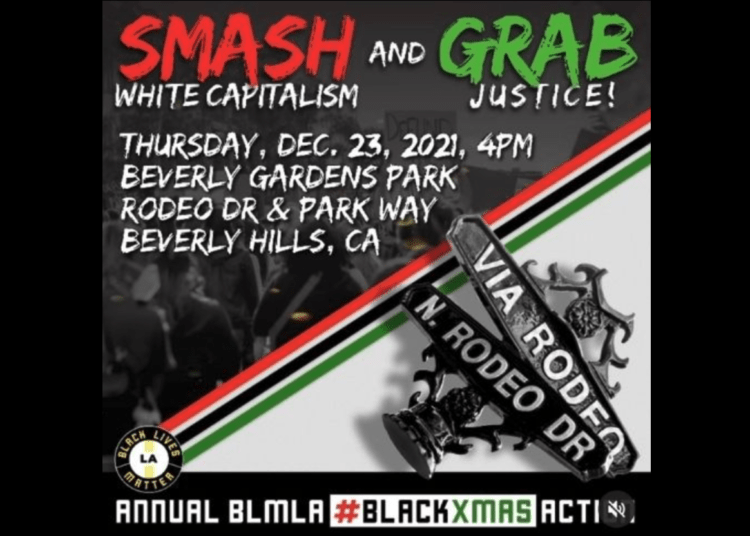 The (unenforced) criminal activity reportedly shut down the area for about two hours on one of the final shopping days before Christmas, according to MSN.

The revolt was referred to as the “Smash White Capitalism and Grab Justice” protest, with BLM LA stating on their Instagram page: “It’s a different kind of ‘smash and grab!'”

The official Los Angeles chapter of Black Lives Matter is promoting a “Smash and Grab” event on Rodeo Drive in Beverly Hills at 4 pm on 23 Dec. #BlackLivesMatter pic.twitter.com/s4L2Z2A62w

The protest began at Beverly Gardens Park at 4 p.m., with organizers saying the demonstration was a commentary on how capitalism is historically linked to violence against people of color, according to MSN.

“Today is a smash and grab. It is a different kind of smash and grab — don’t nobody go and grab Gucci purses, ok? We are smashing white capitalism and we are grabbing some justice. We are smashing and grabbing in the name of our people — we know that every year, the reason we do this is because our people are killed by white capitalism,” said Melina Abdullah, co-founder of the Black Lives Matter Los Angeles chapter, the Post Millennial reported.

Dozens of intimidating radicals made their way down Rodeo Drive at around 5:20 p.m. through the rain, chanting “Black lives, we matter,” “Whose streets? Our streets” and “What do we want? Justice! When do we want it? Now!”

Store workers began locking the group out after they stopped in a few stores and disrupted business.

Along the route the rabid individuals stopped at three intersections, and were met with drivers honking their horns.

The civil disruption came as part of BLM’s “Black Xmas” advocation, where organizers urge people to shop at only black businesses during the holidays.

“We know white capitalism utilizes police violence to steal the lives of our people so that they can make a profit. So every year we celebrate Black Xmas to disrupt white supremacist patriarchal heteronormative capitalism,” Abdullah declared.

According to BLM LA organizer Jan Williams, “Capitalism doesn’t love black people.” This mindset is contributing to the national arm of the BLM movement to lead a boycott of “white companies” until New Year’s Day, Law Officer reported earlier this month.

In a divisive move, they encouraged their followers to help “end white-supremacist-capitalism” by visiting only black-owned businesses during the holiday shopping season.

Police and private security monitored the group and their shenanigans from a distance. There were no reports of arrests made during the march.