“If they think they are going back to the old ways of policing then we’re going to take to the streets again,” Newsome said. “There will be riots. There will be fire, and there will be bloodshed.” 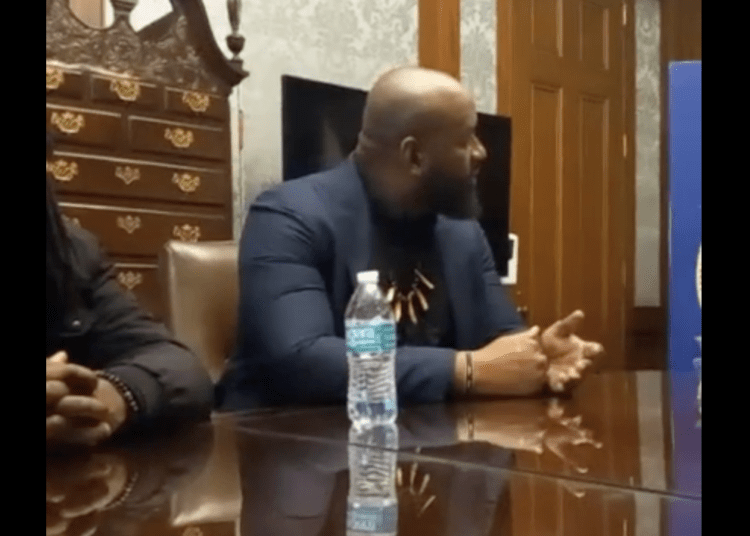 Newsome is no stranger to volatile comments. Last year he said “If this country doesn’t give us what we want, then we will burn down this system and replace it,” Law Officer reported. Now he appears to be using his coercive tactics with the incoming mayor before he’s even taken office.

The spat grew out of Adams’ vow to bring back the Anti-Crime Unit, which was disbanded during widespread violence last year. The former NYPD captain ran on a platform that combined police reform with safe streets.

“If they think they are going back to the old ways of policing then we’re going to take to the streets again,” Newsome said outside Borough Hall. “There will be riots. There will be fire, and there will be bloodshed.”

“To ignore that history and say you’re bringing it back means that he’s tone-deaf,” Newsome told the Post over the phone about the law enforcement task force.

As the city’s second black mayor and former law enforcement professional, Adams told leaders that he was the person best equipped to bring meaningful socioeconomic and educational change to the community.

“There’s one thing that we do agree on, that we need to change conditions that people are living in, historical conditions. And the conditions have not changed,” Adams said during the conversation, which was livestreamed on Instagram and included below.

“What I know for sure, is there is no one in this city that’s going to deal with this issue as the mayor of this city better than I’m going to,” Adams declared.

During a course of dialogue during the meeting, Chivona Newsome, Hawk’s sister, appeared irksome to the mayor-elect when she said politicians “shuck, jive and use rap quotes” but don’t enact meaningful changes for people of color.

“I put my body on the line for my community. So I’m not here for folks to come and say, ‘I’m going to hold you accountable.’ No, it’s us,” Adams lectured.

At one point during the exchange, Newsome took credit for Adams’ election, claiming BLM allowed him to “achieve power,” the Post reported.

“At least with Eric Adams, we have a clean slate,” the controversial leader said, adding he thinks he will work with the incoming mayor on “anti-violence programs and food programs.”

Newsome’s critics say he’s unhelpful working toward “anti-violence” since “he’s frequently spewing inflammatory rhetoric and does nothing to hold violent actors accountable for their crimes,” according to a police source.

Newsome wanted more inroads that reshape law enforcement, and said that Adams “didn’t offer a comment on police reform … he wouldn’t offer us anything concrete.”

“We will be at his front door, we will be at Gracie Mansion, we will be in the streets, if he allows these police to abuse us,” the BLM leader said, without offering assurances that he’d work toward negating criminal acts.

“I am not threatening anyone. I am just saying that it’s a natural response to aggressive oppression, people will react.”

In a statement to the Post, Adams said there is “no reason we cannot have both safe streets and racial justice in our city.”

“If black lives truly matter, then we must address violence in our communities while we address bias in policing. Yelling and not listening gets us nowhere.”