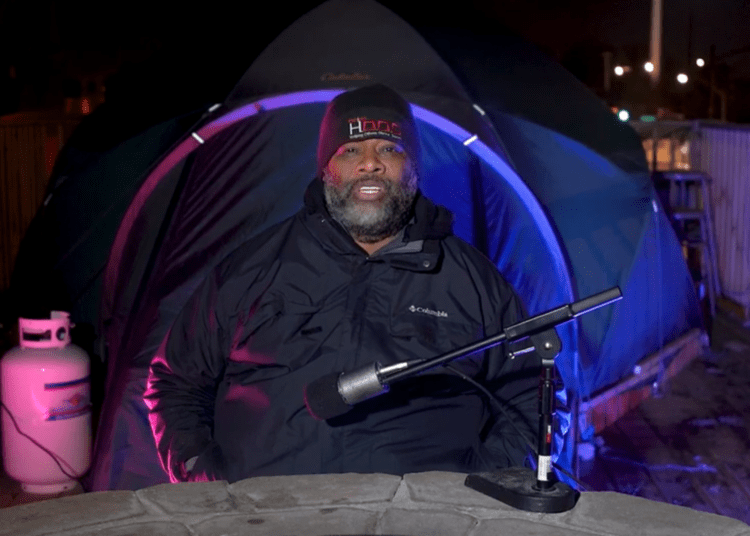 CHICAGO – Pastor Corey Brooks is spending 100 nights on a rooftop in Chicago to raise awareness about the city’s violence. Yet beyond awareness, he hopes to raise enough money to build a community center to mentor the city’s youth.

He’s now spent 60 days on the roof, and Wednesday night he uttered a rebuke aimed at BLM and the NAACP that Law Officer has been saying for years. However, he should have enormous credibility as a leader and stakeholder in the community, so all should listen.

“Tonight, my heart breaks,” Pastor Brooks began. “One of the reasons why I’m on this roof and in this tent is to bring to you the awareness that you need to know about the violence in the city of Chicago.”

“I can’t believe that I’m having to tell you this. But, in Chicago, over the last 24 hours, there have been five children who have been shot,” Brooks said.

“The ages of these shooting victims in Chicago, since noon today, are a girl, 11; a boy, 15; a boy, 16; another boy, 16; and another girl, 17,” the pastor continued. “That’s five children shot in less than 24 hours. If this happened in any other community in America, it would be total outrage, and I mean, outrage.”

“The question that I want to ask is: Where is Black Lives Matter? Where is … unfortunately, I have to say it, the NAACP? Where are all these organizations that say they support and are committed to black lives, but when we have five young people shot, no one is saying a word?”

“That’s all I want to say,” Fox News reported.

Pastor Brooks is the founder and Senior Pastor of New Beginnings Church of Chicago. He is also the founder and CEO of Project H.O.O.D. (Helping Others Obtain Destiny). The organization provides mentorship and offers vocational training, among other services, in hopes of mitigating the Windy City’s crime surge, Fox News reported.

“Just because you grew up in a tough environment does not mean that you cannot succeed, that you can not achieve, that if you put hard work in, if you are committed and courageous, you can achieve the American dream that everyone is out to get, and that’s so important not just to these young men, but to all the young men in our community, especially those who are committing these violent crimes,” Pastor Brooks said.

At his 50 day milestone, Pastor Brooks had raised $2 million during his rooftop campout.