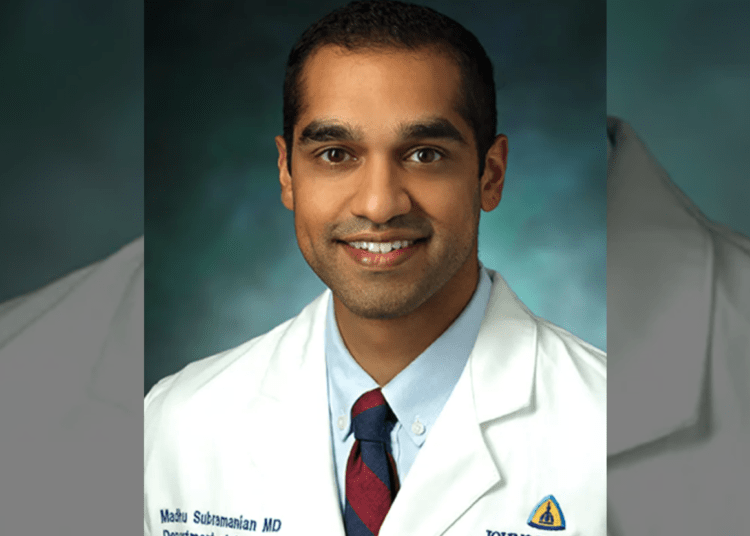 Dr. Madhu Subramanian, was shot during an attempted carjacking on his way to work Friday morning. (Johns Hopkins Medicine)

BALTIMORE – A gunman in Baltimore shot a doctor during an attempted carjacking as the medical professional was commuting to work on Friday, according to reports.

Dr. Madhu Subramanian, 38, is a surgeon at Johns Hopkins Bayview Medical Center and an assistant professor of surgery. He was on his way to work around 7 a.m. when confronted by the violent criminal.

Officers of the Baltimore Police Department found the man injured in the 1200 block of East 36th Street shortly after the shooting, Fox News reported.

Officials at Johns Hopkins said Subramanian was released the day of the shooting in an email to staff obtained by the Baltimore Sun.

“With his permission, we can share that Dr. Madhu Subramanian, a trauma and acute care surgeon, was on his way to work at Johns Hopkins Bayview Medical Center when the incident occurred near the 3600 block of Loch Raven Boulevard,” Johns Hopkins Medicine CEO Paul Rothman and Johns Hopkins Health System President Kevin Sowers wrote, according to the news outlet. “Thankfully, Dr. Subramanian was not seriously injured and has been treated and released.”

There were no details regarding suspect information or an arrest.

After walking in for Trauma call this AM, my colleague called with the most unexpected message.

Joe, are you on call?

Our fellow trauma surgeon was just shot and he is on his way to the trauma center.

Listening to that communication, I was frankly numb and in disbelief.

“We are so grateful he survived this horrific incident and will be OK,” he wrote, according to Fox.

“In the heat of the moment, we often compartmentalize the emotion that goes along with caring for these injured patients. And we do that in order to effectively make one methodical decision after the other to save a person’s life. How do you do that when it’s one of your own?”

He concluded by calling on society to “do better.”