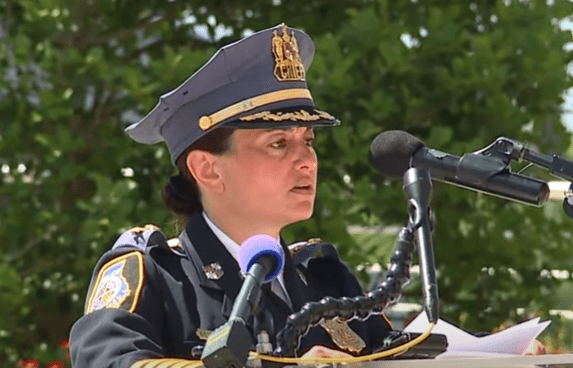 BALTIMORE COUNTY, Md. – Baltimore County Police Chief Melissa Hyatt voted on Wednesday as a member of the Maryland Police Training and Standards Commission to negate basic rights for police officers who are accused of misconduct, according to the local FOP.

Consequently, the FOP says her actions will have a negative impact on police recruitment, morale and public safety.

“With the absence of Due Process, a Baltimore County Police Officer may be terminated from employment without a trial board, which includes citizen participation,” noted Baltimore County FOP Lodge 4 president, David J. Folderauer. “A trial board is appointed by the Chief to hear testimony, review evidence and consider any mitigating circumstances.”

Continuing, Folderauer writes, “Chief Hyatt and the Commission ignored the direction of the Maryland general assembly in an attempt to circumvent the trial board process.” (Bold emphasis Folderauer’s.)

The statement goes on to articulate why the decision will have a negative impact on police officers, including the absence of “fundamental fairness,” which is a core value of the Baltimore County Police Department.

Furthermore, it would seem to open up the police agency and the state commission to undue civil liability if actions are taken against officers who are falsely accused of wrongdoing, a frequent occurrence.

It was unclear how other members of the commission voted on the issue.

Law Officer reached out to Chief Hyatt’s office for a response. We received the following reply via email:

“The press release from FOP Lodge #4 is factually inaccurate; due process has not been eliminated. I have and will continue to support due process for our police officers. Contrary to the FOP Lodge #4 statement, the work of the Maryland Police Training and Standards Commission follows the direction of the Maryland General Assembly in enacting HB 670.

“As Chief of Police, my priority continues to be the safety of the community and the welfare of my dedicated police officers who protect us all.”