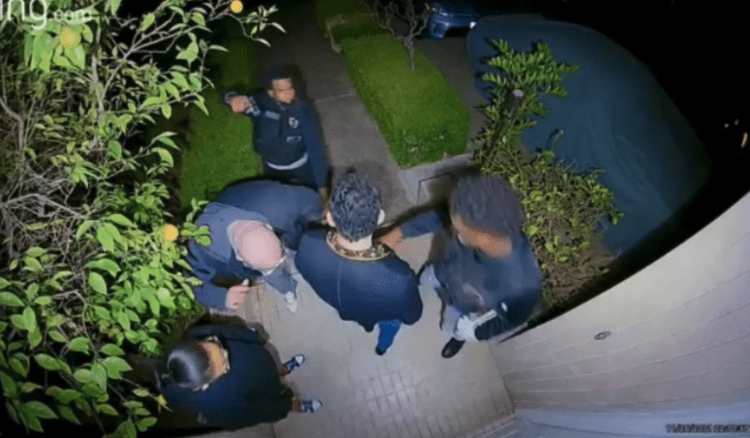 LOS ANGELES — As follow-home robberies have soared in the Los Angeles area, police are investigating surveillance video showing armed suspects donning “police-type” gear and attacking a group of victims outside a home before forcing them inside.

The video shows three people who appear to be returning to a residence when the suspects claiming to be DEA agents violently confront them, FOX reported.

One thief is armed with a handgun, the other with a rubber mallet, according to law enforcement authorities. They are both wearing what appears to be police badges as well as black vests with “police” written on them.

While aiming a gun at the victims, the robbers demand entry into the home. During the crime, one suspect threw punches and cursed at a victim as he fumbled with the keys to open the door.

The video ends as the victim makes another attempt to open the door.

Police said three more suspects appeared once the door was unlocked. The armed robbers entered the house and stole property belonging to the group of victims.

According to FOX11 Los Angeles, the follow-home robbery is believed to have taken place in the city’s Fairfax District.

The trend of follow-home robberies as well as smash-and-grab flashmob robberies have become plagues in the Golden State.

An LAPD spokesperson told FOX News last week that follow-home robberies seem to be “popping up everywhere” in the city.

The department created a “Follow Home Task Force” after discovering in mid-November that they were investigating more than 110 robberies involving at least six different street gangs in which the victims were followed home. It is unknown how many similar crimes have occurred since then and/or in neighboring communities. One such robbery ended in a homicide Nov. 23.

The head of the union that represents nearly 1,000 prosecutors within Los Angeles County accused Gascon on Monday of keeping silent amid the brazen crimes, FOX reported.

Eric Siddall, vice president of the Association of Los Angeles Deputy District Attorneys, didn’t pull any punches. He said the top prosecutor cares more about the rights of criminal suspects than crime victims as gangs of thieves continue to loot retail stores for thousands of dollars in merchandise, often in front of customers and staff.

Last week, 14 suspects who were reportedly involved in 11 smash-and-grab robberies last month were arrested and back on the street hours later because of zero-bail policies. Consequently, they remain free while awaiting their cases to play out in court.

“If you look at the 14 people arrested, they could have been charged, there could have been bail amounts set, but none of that was done because the district attorney refuses to take a leadership position on this issue,” Siddall told Fox News. “He’s created an atmosphere devoid of accountability.”