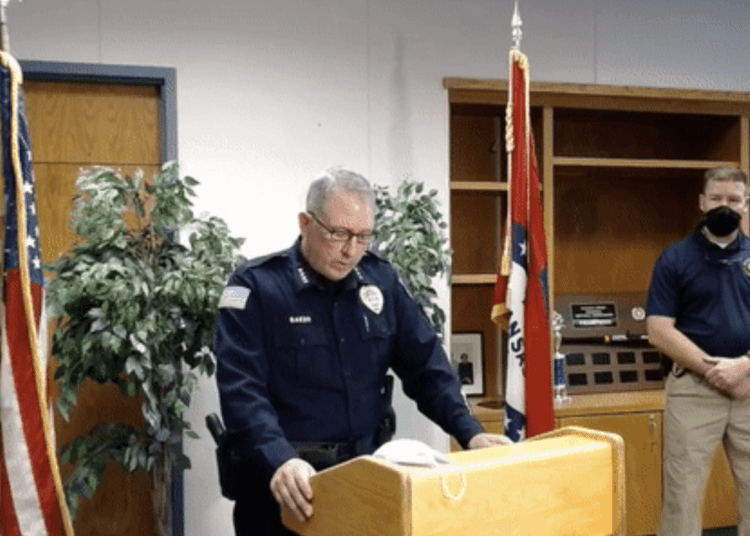 FORT SMITH, Ark. — An Arkansas police officer was slashed in the neck with a weapon before opening fire and fatally shooting a suspect who stabbed and beat his 15-year-old son to death with a rock. Officers also found a woman who was killed after receiving multiple stabs wounds. The police chief confirmed three deaths and one seriously injured officer after the violent encounter, according to reports.

Police received a 911 call about 6:00 a.m. The reporting party heard yelling and screaming coming from a nearby residence. The caller also said there was a confrontation outside the home, according to Baker.

Several officers were dispatched, but a 16-month officer was the first to arrive on scene. The officer discovered Christofer Conner beating a 15-year-old boy in the face and head with a rock, Baker said.

As the officer tried to take Conner, 40, into custody, the suspect pulled out an edged weapon and sliced the officer’s throat, according to Baker said. Once his neck was slashed, the officer responded by firing his weapon twice, striking the suspect and ending the threat.

The officer — whose name was not released — was rushed to the hospital and immediately into emergency surgery. The 15-year-old male teen did not survive the brutal beating. He had sustained multiple stab wounds and blunt force trauma. He was pronounced dead at a local hospital, according to Baker.

Additional officers at the scene went inside the home and discovered “evidence of an extremely violent attack,” Baker said. Furthermore, they discovered the body of Julia Marie Moore, 42, inside the residence. She was deceased from apparent stab wounds.

A 5-year-old child was also found safe in the home. The child was later placed with other family members. The chief believes the officer’s swift actions saved the child’s life.

Connor’s relationship to Moore and the child was unclear.

“Fort Smith is a wonderful community, and when unimaginable tragedies like this happen we are all left scared, angry, frustrated, sometimes hopeless,” Baker said during a press conference Sunday afternoon. “I’m thankful for officers who are willing to put their lives on the line when evil threatens our community. I’m thankful for the medical team who took care of our officer. And I’m thankful for a community that always pulls together when tragedy strikes.”

The Arkansas State Police will take the lead on the investigation since it involved an officer shooting.

In addition to the wounded officer who engaged the suspect, the chief said one additional officer will take administrative time off work due to the circumstances encountered at the horrific scene.