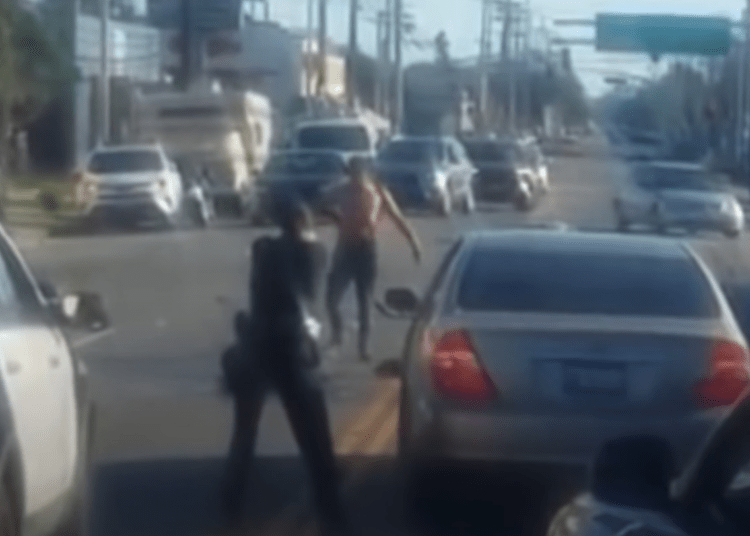 Los Angeles Police Officer Toni McBride was confronted by a man holding a box cutter. She shot him six times. That sentence is often enough to start a riot in many communities, but there is much, much more to the story.

McBride arrived at a chaotic five-car crash with multiple occupants and injuries. Many bystanders arrived and added to the number of citizens whose needs and voices demanded attention. Witnesses quickly pointed to a man in a pickup truck, later identified as Daniel Hernandez, and shouted that he caused the crash, had a knife and was wanting to hurt himself.

Now McBride is dealing with a reportedly armed man as well as the crumpled cars and injured persons who apparently were intentionally harmed by Hernandez. She ordered Hernandez to come out of the truck. When he did, he moved swiftly toward McBride, displaying the edged weapon. Before assisting officers could arrive, McBride faced not one decision but many.

Was this person mentally disturbed and could he be talked into compliance? Was he a threat to others nearby as well as to the officer and himself? Would any of the bystanders interfere? McBride had already had to order persons who approached her to get back. She did so to keep them out of the danger zone, but also to avoid being a distraction from her attacker. She had the presence of mind to make the order in both English and Spanish.

McBride drew her service weapon to augment her demands for Hernandez to stop, along with her upheld non-gun hand to signal him to come no closer. She backed up as far as she could and still maintain control over her position in the encounter. Hernandez continued to advance rapidly toward her in what multiple video captures show was unquestionably aggressive.

Some would question at this point what threat a box cutter could be against a well-trained police officer with a handgun and other weapons available to her. Those who have not faced the results of an edged weapon against flesh may not realize the serious threat posed by the little box cutter (described in this case as a small folding type knife). The swiftness and seriousness of injuries from such a weapon can cause rapid blood loss, loss of vision if directed toward the face, and loss of muscle and nerve control needed to execute arrest techniques and operate handcuffs and weapons.

So, Officer McBride fired two shots from her service weapon, striking Hernandez with both. He fell, but almost immediately rose to his knees in a runner’s crouch, intent on completing his mission of attacking the officer and, in all likelihood, forcing her to kill him as a means of death by suicidal intent. As he poised to resume his attack, McBride fired a volley of four additional rounds that stopped the man, killing him.

Any headline that minimizes the officer’s complex decision such as the LA Times headline that read “He had a box cutter, ignored commands, and a cop shot him six times. Were there better options?” doesn’t merely fail to tell the story, it is a twisted falsehood in what it fails to reveal as true. McBride called for assistance, she gave clear and lawful orders with verbal commands and gestures repeatedly. She had injured persons who needed her immediate attention, and bystanders who could easily have been attacked by Hernandez if he was successful in taking the officer out of commission, or by making a sudden turn. She had already retreated to create more distance as he continued his intentional, rapid advance. She fired and then assessed for further threat. Seeing that Hernandez was able and purposeful to continue his attack even after being shot, McBride fired multiple times to ensure that his attack would be stopped. Not knowing what condition Hernandez was in, whether he was impervious to pain because of drugs or adrenaline, or perhaps even wearing body armor, the multiple additional shots were tactically sound, yet saving some rounds if still needed.

The media made much of Officer McBride’s status as a top gun in her academy class and other shooting competitions. She was known for her speed and accuracy, characteristics that may have saved her life and others when she was attacked. McBride’s response to this multiple injury crash scene that turned into an ambush can serve as an example of dealing with multiple sensory inputs, putting innocent citizens’ safety first, exercising training to prevent the use of deadly force with repositioning and clear commands, and stopping a violent attack by lawful and necessary means.

So, of course, McBride and the LAPD are being sued.

Attorneys are arguing that the lawsuit should not proceed after a finding that qualified immunity is attached to McBride’s actions. Qualified immunity is applied to unique situations where officers must make rapid decisions for which there are no clear operational or legal absolutes of which the officer should have been aware. The case is now on appeal to the 9th Federal District court on that question.

Among the documents and many court precedents being offered is a friend of the court brief from the National Police Association (NPA). The brief offers expert opinion on the human performance factors of high-stress decision-making as well as a lengthy record of case law upholding the courts’ recognition of the folly of second-guessing officers facing such decisions. Upholding the application of qualified immunity in this case is important to the future of any law enforcement officers who will be faced with the decision of a lifetime.