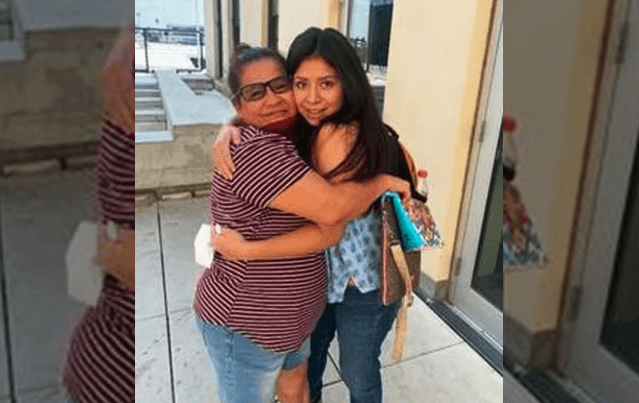 Angelica Vences-Salgado was reunited with her daughter, Jacqueline Hernandez, on Sept. 10, 2021. Hernandez, now 19, was abducted in 2007. (Clermont Police Department)

CLERMONT, Fla. — A mother was reunited with her daughter who was abducted nearly 14 years ago from their home at the age of 6, authorities in Florida said Monday.

Angelica Vences-Salgado notified police Sep. 2 after receiving a social media message from an individual claiming to be her missing daughter, Jacqueline Hernandez, who was taken from the family home in Clermont in 2007.

Vences-Salgado had not heard from her daughter since she was abducted by the girl’s father, Pablo Hernandez, according to the Clermont Police Department.

Following the abduction, a felony warrant for kidnapping was issued for Pablo Hernandez in December of 2007, NBC News reported.

The woman claiming to be Jacqueline Hernandez in the social media message told Vences-Salgado she was in Mexico and requesting a meeting Friday at the point of entry in Laredo, Texas, according to police. After an investigation, authorities verified the woman as Vences-Salgado’s missing child.

Officials “determined that the female was indeed Jacqueline Hernandez who was abducted from her mother in 2007. At approximately 4:55pm, Jacqueline, now 19 years old, was successfully reunited with her mother,” police said in a press statement.

The women had a glorious reunion as demonstrated in a photo of the two hugging, which was included with the press release.

“We are still working with other law enforcement agencies to locate him,” the captain said.

McMaster said it was unclear why Jacqueline Hernandez chose to reach out to her mother at this point in time. The family is presently declining media interviews, and details on Jacqueline Hernandez’s life since her abduction have remained undisclosed.