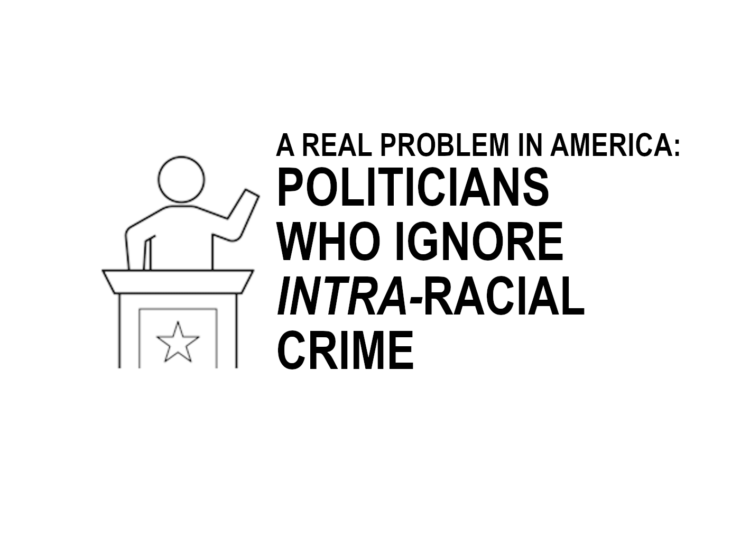 America blinked after George Floyd overdosed and ingested enough Fentanyl to probably put down a hippopotamus. Yet hopefully, the truth will soon emerge in this case. And hopefully America will soon realize that a supposedly blatant act of “police racism” in broad daylight with cameras running was actually a textbook response to a drug overdose.

A Bigger Problem Beyond George Floyd…

However, it seems the circumstances that blinded America may take a bit longer to come to light. That’s because corporate media, cowardly politicians, lawfare lawyers, and look-at-me “social justice warriors” seem all too thrilled playing racial politics. They’ve also been quite busy virtue-signaling among themselves while pandering to the public.

And they’ve swept the real problems involving race and crime in America under the proverbial rug.

So don’t be fooled. Despite all the supposed “systematic racism” in America, intra-racial crime is a much bigger problem.

And part of the problem is that actual crime data contradicts many of the popular narratives: the ones that politicians use to pander, the ones lawyers use for lawfare, and the ones that “allies” and anti-whatever activists use to protest just about anything.

However, according to the Washington Post database, 12 allegedly “unarmed blacks” were unfortunately shot by police in 2019. Meanwhile, 2,574 black victims were murdered by black suspects. Yet almost paradoxically, most politicians and corporate news and social media hardly seem concerned.

If “black lives matter” then why are the deaths of 21,350% more blacks being ignored?

Well, for one thing, and by no means making excuses for any tragedies, crime data flatly contradicts the popular lies and battle cries. So we probably shouldn’t wonder why the facts and the realities of intra-racial crime are being ignored.

Fortunately, crime data and statistics are easy to find at ucr.fbi.gov—and the numbers speak for themselves. So we should remain hopeful that we can get beyond the nonsense and get to the real numbers to solve real problems.

The Absurdity of “Racial Disparity”

However, we probably need to overcome the myths and misconceptions that corporate news and social media want us to believe instead. Indeed, so-called “journalists” seem eager for us to believe that “people of color” are “disproportionately” being victimized by law enforcement—and basically everybody else for that matter.

And much of their “journalistic” nonsense involves absurd comparisons based upon census data. Granted, there are so many problems with their approach. But let’s just accept it, as is…

And in so doing, indeed we’ll uncover plenty of “disparities”—including the ones they’re trying to hide. For example, while “blacks” represent only 13% of the population according to U.S. Census data, they are responsible for a disproportionate amount of murders and armed robberies.

In fact, in 2019, blacks committed disproportionately more murders and armed robberies than all other racial demographics combined according to FBI UCR crime data.

More specifically, despite being representing only 13% of the population, blacks were disproportionately responsible for 51% of the homicides and 53% of armed robberies in 2019, according to FBI UCR statistics.

If the ideas of “racial equity” are true, and census-based comparisons are valid as “journalists” so eagerly explain, then blacks are clearly committing murders and armed robberies far beyond their “equitable share.”

That is, 17% of whites were killed by blacks. And 8% of blacks were killed by whites. In other words, blacks killed more than twice as many whites, than whites killed blacks.

So much for “white privilege”…

Anyway, despite the significance of these “disparities,” comparing crimes with census populations like this is absurd. For one thing, these comparisons overlook the criminal population, which might be mildly important here. And even though “journalists” can’t seem to avoid making absurd census/crime comparisons, we must ignore them. Otherwise, we’re not going to get beyond racial politics and ridiculous “disparities.” More importantly, paying attention to made-up “disparities” will only distract us from solving the much bigger intra-racial problems and more difficult circumstances regarding violent crime in America.

The Real Problem of Race & Crime in America:
Politicians Who Ignore Intra-racial Crime

Indeed, intra-racial crime is a big problem. But it seems politicians and cowardly leaders are too busy scapegoating law enforcement—instead of actually doing something effective. For one thing, many politicians have made a whole lot of promises since the riots in Ferguson. Yet they continue to ignore the inconvenient facts about intra-racial violent crimes.

Despite all the “police reforms” and measure of transparency and accountability, not much has changed since Ferguson. And despite all the promises, an unfortunate reality remains: 9 out of 10 black victims have been killed by black suspects, year after year.

The fact that FBI data indicates that 90% of black victims were killed by black suspects in the four years before and after Ferguson is a problem that everyone should be protesting—instead of ignoring.

And if silence causes violence, then it seems the problems of intra-racial violent crime are silently crippling our nation.

So beyond facts and stats, we must demand solutions from our political leaders—no matter how busy they may be scapegoating law enforcement.

As Americans, we must demand more—if we ever expect our political leaders to actually do more.

And most importantly, we must work together to solve a much bigger problem in America: intra-racial crime.