When the medal was presented, Mingus removed his sweatshirt to reveal a T-shirt which read "smash white supremacy." 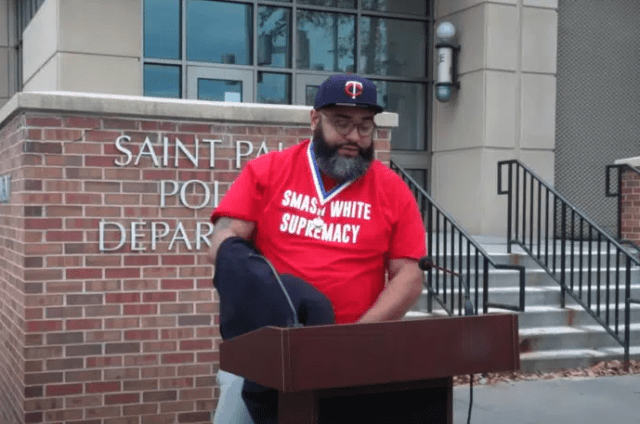 When the medal was presented, Mingus removed his sweatshirt to reveal a T-shirt which read “smash white supremacy.” (On Site Public Media/YouTube)

Mingus was awarded the medal because of his response to a shooting incident at a Speedway gas station near Rice Street and Larpenteur Avenue last October.

He saw several people running from the area, heard gunshots, and decided to follow a van leaving the incident, believing it may have been involved. When the van pulled over, a man got out asking for help and was bleeding profusely from his wrist.

Mingus wrapped the man’s arm with a shirt.

“Later it was learned an artery in the victim’s wrist had been severely damaged by a bullet. Doctors stated that the aid provided by Alex prevented this man from dying,” interim Chief Jeremy Ellison said during a Friday award ceremony, according to On Site Public Media.

“Alex, you displayed great courage during an extremely dangerous situation involving gunfire,” said Ellison, who then presented Mingus with the chief’s award for valor.

When the medal was presented, Mingus removed his sweatshirt to reveal a T-shirt which read “smash white supremacy.”

“I feel like I did what anyone would have done with the little bit of training that I have,” Mingus said. “I’m a dad and a husband, and a wonderful community member.”

He said he saw nine squad cars “race past us” that day as he was “flagging them down.”

“That was the potential of 18 people, 18 people could’ve stopped to help preserve life, but 18 people chose to go to a potential threat. I recognize the man had a pistol and we didn’t know what he was doing,” Mingus continued.

Mingus then said he wouldn’t be keeping the medal and that he’s “very uncomfortable being here with you guys.”

“I do not rock with the police,” Mingus went on to say. “I just want folks to know they don’t keep us safe, we keep us safe.”

Mingus ended his statement by claiming “riots work” as he fist bumped the police chief.