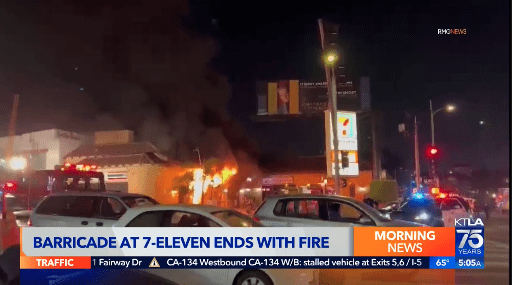 A 7-Eleven burst into flames during a barricade situation in Los Angeles Monday evening. (Screenshot KTLA)

LOS ANGELES – A female suspect is in custody after barricading herself while armed with a knife inside a 7-Eleven store that went up in flames in the Mid-Wilshire neighborhood of Los Angeles Monday evening, according to a report.

The crime occurred around 9:30 p.m. at the market located near the intersection of West Olympic Boulevard and South La Brea Avenue. Video showed the suspect, who was reportedly armed with a knife, stacking items to block the entrance at the front of the business, KTLA reported.

Shortly after police entered the store to get the woman, flames were seen as the building was engulfed in fire.

Firefighters quickly arrived and extinguished the flames. No one was injured. It was unclear how the fire originated or what prompted the woman to take this action.

Police did not immediately release further details. However, they should be applauded for ending this situation without further harm to the suspect or officers.