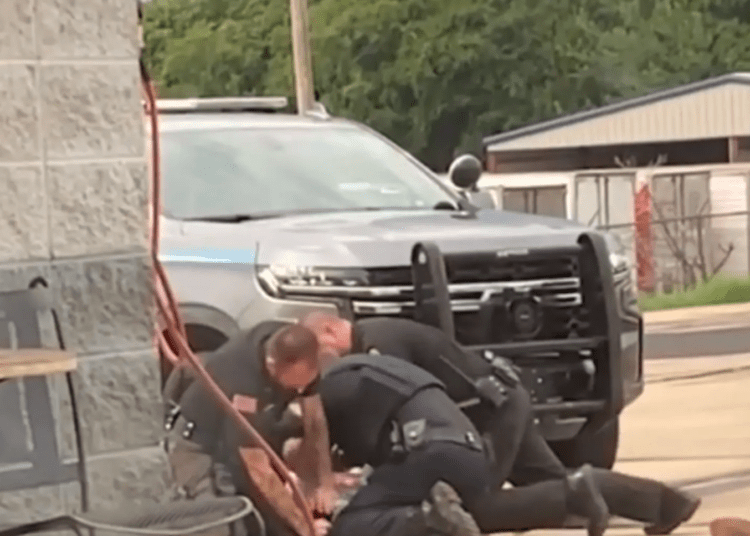 Three LEOs have been suspended pending the outcome of an investigation. (Twitter)

MULBERRY, Ark. — Three law enforcement officers in Arkansas were suspended after a video emerged and went viral showing them using force on an arrestee.

The TikTok video posted on Twitter shows police using force as they take a man into custody. Two of the LEOs are deputies with the Crawford County Sheriff’s Office and the third is an officer with the Mulberry Police Department, the New York Times reported.

The officers were responding to a report of a suspect making threats to an employee at a convenience store Sunday morning, according to THV11 News.

The man was identified as 27-year-old Randall Worcester of South Carolina. He reportedly spat at the worker and threatened to “cut off their face,” the local news outlet reported, citing Crawford County Sherriff Jimmy Damante.

Worcester fled on a bike but was soon caught by officers. They began a “calm and civil” conversation with him when he reportedly attacked one of the deputies — knocking him to the ground while punching the back of his head, the sheriff told THV11.

The attack led officers to restrain Worcester and eventually the actions that were captured on video.

“In reference to the video circulating on social media involving two Crawford County Deputies, we have requested that Arkansas State Police conduct the investigation and the Deputies have been suspended pending the outcome of the investigation,” Sherriff Damante said in a statement. “I hold all my employees accountable for their actions and will take appropriate measures in this matter.”

Mulberry city officials said much the same thing as their officer was placed on administrative leave pending the outcome of the state investigation.

“We will take the appropriate actions at the conclusion of the investigation,” the officials said in a statement.

Arkansas Gov. Asa Hutchinson confirmed that State Police are taking over the investigation.

“I have spoken with Col. Bill Bryant of the Arkansas State Police and the local arrest incident in Crawford County will be investigated pursuant to the video evidence and the request of the prosecuting attorney,” Hutchinson said on Twitter.