Would You Do That In a Fight? 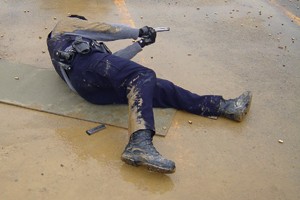 During a recent advanced patrol rifle class, an officer leaned out far from a hard-cover position to fire on an armed offender. Why break cover? In part because his sling design wouldn't allow him to change shoulders while maintaining his cover position. But more importantly, he hadn't been trained to make use of protective cover. With most of the officer's upper body exposed, instructor Henk Iverson called to him, Would you truly do that in a real fight on the street? The officer considered the question, was shown his significant vulnerability and replied, Not again.

I've spent considerable time training with Iverson. After coming to the United States from South Africa, he founded his law enforcement/military training company, Strike Tactical Solutions Ltd. His lifetime of military and law enforcement experience under very tough conditions has forged a training doctrine of real training, not feel-good training. It only counts if it stands up to the test.

As Senior Trooper Bob Dent (ret.) of Oregon writes, "Police work is the only profession that first gives the test, then teaches the lesson. If we survive, then we learn."

We must reverse the saying live and learn. As disaster has proven, the learn-as-you-go model is a poor method indeed when failure means death or great bodily harm. Lessons learned without loss should be the goal, and those lessons must be based on the harsh reality of the street. Training done merely to earn a piece of paper for a training file will not protect an officer in a life or death struggle. As trainer Tony Blauer stresses, "There is no faking endurance, or any other trained skills. Training is faulty when it lacks the truth of the street."

Consider how many agencies firearms training (fighting-skills training) consists of officers standing still in front of an unmoving piece of paper, in full light, with little to no stress and generous time frames. Are these the conditions of a deadly force event? Certainly not. This is training to put a piece of paper in the file to show the officer has qualified.

But qualified to do what? Fight a piece of paper?

A real fight features high-speed movement, often with low light and extreme stress. As the U.S. Supreme Court noted in Graham v. Connor 490 U.S. 386 (1989), police officers are often forced to make split-second judgments in circumstances that are tense, uncertain, and rapidly evolving. If the U.S. Supreme Court gets it, why don't we?

Moving beyond fundamentally flawed training requires alternative approaches. Take the issue of line of force (e.g., the path of a bullet, the arc of a knife blade or the trajectory of a punch.) If an officer stands unmoving in the line of force, they will be at highest risk. As Iverson demonstrates, rapid movement off the line of force combined with aggressive counter action affords a far higher probability of successful defense. New thinking? No, but lessons of the past are often forgotten or dismissed. Fast movement perpendicular to the threat existed long before firearms came on the scene.

Classroom Notes
Iverson's training incorporates a number of critical issues I don't see in many law enforcement firearms/fighting skills classes, such as our brain power. Steinbeck wrote that the mind is the ultimate weapon and all gear is incidental. Iverson uses that lesson to address the battle of the mind.

He details Colonel John Boyd's OODA Loop. Boyd was a fighter pilot who studied the issues of action versus reaction in the split seconds of aerial combat. Boyd's OODA stands for observe, orient, decide and act. It's a series of steps you can force on your adversary when you derail his plan of action.

Example: An offender armed with a knife moves rapidly in an attempt to stab an officer. Seeing the attack beginning, the officer moves off the line of force while simultaneously drawing their pistol and firing. The offender's attack fails because he must observe the officer s movement, orient himself to a new line of attack, make that change and then follow through. By then, he has lost the time element to complete his attack because of the OODA Loop forced on him by the officer's sudden movement.

Iverson's training adds an S to the front of the OODA Loop that represents situational awareness. It's simply a means to build on Boyd's effort by insisting that officers maintain 360-degree awareness as they move through their daily efforts, be it on or off duty.

Iverson then details the vital issue of shot placement. We can argue bullet size and type for police handguns, but what really matters is where the bullet strikes. In a gunfight, bullet placement is critical.

Traditional law enforcement targets show the X-ring in the mid-center belly. Long ago in my department s firearms training, I moved our point of aim/point of impact to an area covered by cupping your hand below the Adams apple.

This impact area is above body armor, which offenders are wearing more often, and it's not covered by heavy clothing and/or inches of body fat. Iverson does the same.

Vital body functions are contained in that area. It's no secret offenders know this. The white T-shirts some agencies require clearly outlines this area. I've directed my officers to go to dark t-shirts to mask this obvious point of danger.

Iverson's next area of discussion: the position of the trigger finger on the weapon. Again, I found consensus with Iverson when he illustrated the bent C trigger-finger position (see photo). Simply put, instead of placing your trigger finger flat alongside the frame/slide, you should arch it with the tip of the finger pressing into the frame forward of the trigger guard. On a Glock pistol, for example, the tip of the finger should press into the serrated disassembly bar.

I first learned of this technique from noted writer and friend Mas Ayoob a number of years ago when I was studying the involuntary discharge of weapons; specifically, officers who insisted they had their finger off the trigger but nonetheless fired their handguns. Bruce Siddle of PPCT systems wrote in detail of the human stress response that causes the trigger finger to drive backwards into the trigger and fire the weapon even when the officer was unaware of it.

One hand can mimic the other under stress. Example: An officer gripping their handgun, grabs an offender with the support hand and tries to force the offender to the ground. The gun hand involuntarily grasps and the trigger finger strikes the trigger, firing the pistol.

Loss of balance and startle response are also documented actions that cause involuntary discharge. In my classes on use of force, I show news articles that report an officer-involved shooting based on all three of the above, each a fatal shooting and unintended.

After these discussions in the classroom, Iverson moves the officers to live-fire training. Again, we consistently see officers lack of realistic basic training emerge under stress. Most officers have had zero training in moving off the line of force. When shown the life-saving advantage, they ask why this isn t the most basic training from day one. Answer: It should be.

During conventional firearms training, how many times have you seen a malfunction occur, with the officer stopping and raising their hand for assistance? Again, would you, could you, do that on the street? In a fight, you re on your own. No range officer is coming over to figure out why your pistol shut down.

Remember the words of Officer Chris Schneider of the Anaheim (Calif.) Police Department: Bring the street to the range, not the range to the street. Similarly, Iverson presses each officer to make every live-fire training day a gut check, not a carnival game.

Winds of Change
Training in Illinois has taken a sharp step forward as men such as Iverson and retired special-ops soldier Paul Howe have joined our work. By incorporating the above issues into a series of fighting-skills courses incorporating both handguns and long guns, every officer attending from patrol to SWAT has been forced to re-evaluate their skills and take stock of what they would truly do in the fight.

The winds of change are blowing in law enforcement training. Historically, changes have come based on disaster. That must change by proactive training that meets the violent reality faced daily by our men and women in blue. The trainers noted in this article and many other good men and women are working every day to make this new training the standard.

Evaluate where you stand and move to reality to gain competence and confidence. Your life depends on it.