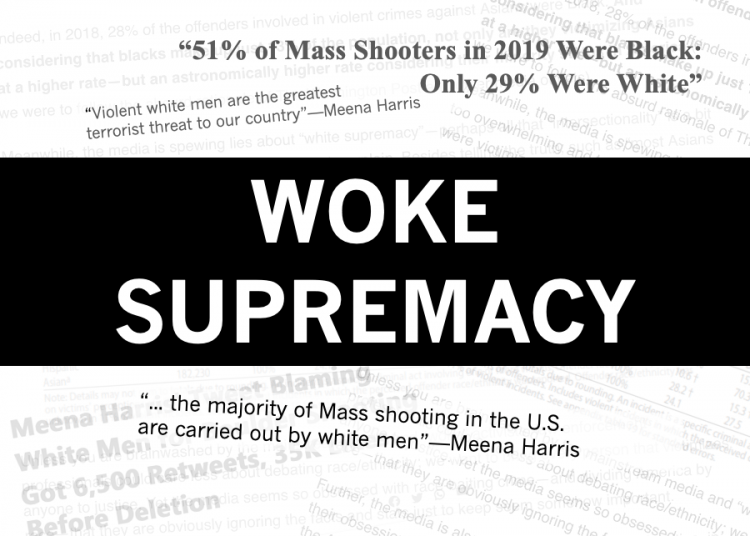 Just when misunderstandings about crime and law enforcement couldn’t be worse, politicians, the media, and bow-before-my-wokeness personalities are sinking us to an even greater depth of ignorance and incivility. Indeed, some unbelievably asinine “assumptions” about violent crime and law enforcement were put on full display this week—without any regard for civility, solemnity, and respect for the recent tragedies America has unfortunately suffered.

Of course, many of those who should be telling the truth busied themselves doing the exact opposite. And they seemed to be falling over themselves on social media trying to blame and frame “white supremacy” and another “white guy having a bad day” for the recent tragedies America has suffered.

And after weeks of blaming “white supremacy”—as the cause for the attack on the Capitol, the attacks on Asians, and attacks on whoever or whatever else—we hoped that instead of lies about race and mass shootings, politicians and the media would tell the truth, or at least part of it.

Admittedly, we were wrong.

Within the first 24 hours of the tragic shooting in Boulder, politicians and aspiring personalities were on social media decrying an angry white man with a gun. And they did so despite knowing the actual identity of the suspect, or other facts of the matter. Even worse, without evidence and apparently without a clue about crime statistics, they were portraying the incident as (yet) another act of domestic terrorism by a white supremacist.

Amid the lies and the fury of social media wokeness, the niece of Vice-President Kamala Harris, Meena Harris, offered perhaps the most racially prejudiced and most asinine assumption when she tweeted: “The Atlanta shooting was not even a week ago. Violent white men are the greatest terrorist threat to our country.”

However, the violent white man who Meena assumed was responsible, was actually a Syrian immigrant named Ahmad Al Alawi Alissa. Subsequently, Harris also offered perhaps the most ignorant excuse for her blatant racial prejudice as well.

While she probably didn’t plan on doing this, Harris’ failed attempt to justify her racial prejudice actually serves a far greater purpose: it highlights the ignorance about violent crime in America, and the claim that “…the majority of mass shootings in the U.S. are carried out by white men.”

Ignoring the truth in facts and data…

About the only part of the “white guy” narrative that bears any truth is the “guy” part. Indeed, “men” are responsible for 98% of mass shootings. However, “whites” are no more likely to be involved in a mass shooting than any other race, presuming that race even matters as far as motive is concerned.

Granted, in putting racial prejudice and ignorance on social media for all to see, Meena Harris and others like her may have been thinking about the kind of mass shootings that are sensationalized in mainstream news and social media. And they probably weren’t thinking about the mass shootings that politicians and the media desperately try to ignore: the incidents involving the shooting/killing of three or more people—which occur all too often in America.

That’s because such ignorance and related political failures are partly to blame for mass shootings and other violent crimes in America.

For example, 15 people were sho in a gang-related mass shooting outside a funeral in Chicago last year. But since the tragedy of this mass shooting doesn’t fit the latest narrative, it probably won’t be mentioned beyond a footnote, if at all.

Even worse, instead of recognizing who is being victimized by whom—and recognizing those who truly need the most help—politicians, the media, and the wanna-be-woke are clearly ignoring who is responsible for the majority of the mass shootings in America. And whether it’s gang-related or drug-related, or related to other socio-political problems they also seem to be ignoring the underlying socio-political problems as well.

And if we follow the manipulation and idiotic rhetoric often used by The Washington Post and other mainstream media outlets, this could seem even worse.

That is, if we draw upon census data—and the fact that “Blacks or African Americans” represent about 13% of the population—then Blacks and African-Americans are obviously over-represented as suspects in mass shootings; and Whites are under-represented.

Accordingly, Blacks represent just 13% of the population but are responsible for more than 51% of mass shootings. And if we really want to take a page from The Washington Post race-based playbook, we should probably mention something like, “due to the racial disparity that Blacks make up just 13% of the population, but account for 51% of mass shootings, people are more likely to be victimized in mass shootings at a higher rate by Blacks, than Whites,” or some such nonsense.

Granted, politicians and the news media attempt such manipulations to support their lies and narratives. But they’re also trying to manipulate the very definition of a mass shooting: is it a tragedy involving 2 or more victims, 3 or more, at least a dozen? Aside from being a shooting in “public,” definitions of a “mass shooting” lack consensus, if not common sense.

Aside from their attempts to lie and manipulate, politicians and the media will often try to pivot: notice how Vice-President suddenly become the first “Asian American Vice-President” recently. And notice how instead of racism, the massage parlor shooting in Atlanta are now being blamed on Christianity instead.

Neither of these things are accidental. And neither is the way that politicians and the media often try to just ignore the truth hoping it will just slip away.

Or even worse, as politicians and the media often attempt, they’ll say two things at once, or everything at once. For example, and keeping our discussion limited to women named “Harris,” these headlines illustrate just how manipulative (or confused) the media can be regarding racial identity…

Why ‘woke supremacy’ must not be tolerated…

Aside from inconsistencies and lack of consensus, if there is anything certain about the media lies, manipulation, and nonsense, it’s this: the nonsense certainly needs to stop.

And quite frankly, we shouldn’t care about the excuses. But we must absolutely care about the lies that are being told about crime and law enforcement and the manipulation of public perception.

Of course, politicians and the media treat various crimes differently depending on whether or not it fits their narrative. And of course, with all the “white pandemic” and “white supremacy” narratives and nonsense swirling around, racially prejudiced “assumptions” should only be expected.

Yet beyond assumptions, lies, and manipulations, there are facts. And we should never let assumptions and racial prejudice conceal the facts. Instead, we must always insist upon evidence, facts, and truth. It’s an insistence that can truly help free ourselves from being victims of crime, and it harks one of the founding principles of America:

“We hold these truths to be self-evident, that all men are created equal, that they are endowed by their Creator with certain unalienable Rights, that among these are Life, Liberty and the pursuit of Happiness…”

Therefore, we must demand the facts, the evidence, and the truth. And we must challenge the lies we’re being told about race, violent crimes, and mass shootings—and the assumptions soaked in racial prejudice that have been displayed on social media.

Otherwise, the lies, manipulations, and false narratives in the news and social media will continue—and prejudice and misunderstanding will only continue to divide us…