No Result
View All Result
Home Special Topics Below 100 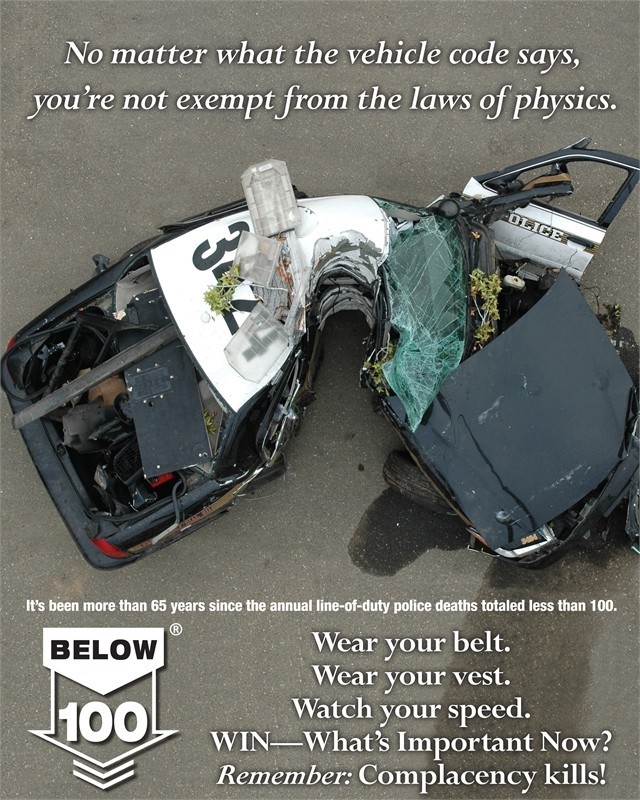 WIN is a simple but powerful acronym used by the famous college football coach Lou Holtz. Its meaning: What’s important now? He reminded his players at Notre Dame to ask themselves this question 35 times a day: when they woke in the morning, in class and study hall, in the weight room, on the practice field and when on the sidelines or on the field during games.

As law enforcement professionals, we need to take a lesson from Coach Holtz and ask ourselves this same question 35 times a day. Doing so, we’re forced to focus on what’s important in the moment, thereby prioritizing our mission and assessing the threats and the actions necessary to WIN that confrontation.

As law enforcement trainers, we also need to ask ourselves this question continually to ensure we’re focused on what’s important in our training. This is critical in order to properly prepare our officers for their chosen profession, to prepare them to be winners and warriors.

Last fall, Law Officer launched the Below 100 project. The goal of Below 100 is to reduce the annual line-of-duty deaths in the U.S. to below 100, a level not seen since 1944. Remember: Simple is the lack of complexity; easy is the lack of effort. Below 100 focuses on five simple concepts, one of which is WIN.

The purpose of this article is to review the Below 100 concepts from the perspective of WIN. Through this, I hope to stimulate thought, debate and reflection on critical issues facing law enforcement professionals and to challenge all of us to focus on what’s important now.

What’s important now? Train officers on the skills and tactics needed to remove their seatbelts while their vehicles are coming to a stop so they can deal with threats from the vehicle.

Note: The corrections officers and border agents I’ve spoken to often suggest this element of the Below 100 project doesn’t apply to them because they are seldom in vehicles. I suggest it does. Seatbelts are personal restraint devices that keep us from being killed or injured during a traffic collision. Officers whose jobs don’t involve driving still need “personal restraint devices” of another kind—those that keep us from saying and doing less desirable things out of emotion that would result in unnecessary fights, complaints regarding excessive force and unprofessional conduct. If you take a moment, I’m sure you can all think of at least one time when you wished you’d engaged those personal restraint devices.

What’s important now? Help officers understand that when they refuse to wear their vests, they’re putting themselves and their fellow warriors at risk unnecessarily, and that’s not acceptable. Regardless of whether you work the streets, work in the office (remember the Detroit, Mich., PD station shootout) or work the jails, body armor may be the single most important piece of equipment you’re issued. Make the decision to wear it every day.

The reality: Every day officers around the world make excuses about why they race to calls. Every day, peers and supervisors turn a blind eye to this behavior. Every year, officers and citizens are seriously injured and killed because of those excuses.

What’s important now is to realize that our tendency to race to calls is getting officers killed and injured on a daily basis. Take the time to read some of Travis Yates’ insightful articles about driver safety and Below 100. Go to LawOfficer.com and keyword search Travis Yates.

What’s important now? Realize that the problem isn’t just on the road. Corrections officers routinely rush into incidents in a jail without adequate intelligence or adequate resources. Officers routinely rush into houses or insecure premises without waiting for backup or stopping for a few seconds to observe and listen. Ask yourself, should I rush through the door to execute that warrant, or should I wait for adequate intelligence and backup? Should I engage in a dangerous foot pursuit, or does it make more sense to proceed with deliberation and set up containment?

The reality: Every day officers around the world go out on routine patrol, routine rounds, routine stops and routine checks. Routine lends itself to complacency, and complacency results in officer injuries and deaths. Every day, supervisors, officers and trainers around the world choose to ignore complacent behavior and in doing so, condone the taking of unnecessary risks (ignored behavior is condoned behavior). Ignoring these risk-taking behaviors results in law enforcement officers being killed and injured.

What’s important now is to understand that complacency in law enforcement is a worldwide issue. It’s an issue for uniform patrol officers, detectives, police marine units, trainers, mountain bike cops, customs and border agents and corrections officers. It’s an issue at all ranks and all levels of seniority. It’s an issue reinforced through the word routine when we talk about routine traffic stops, routine warrants, routine calls, routine rounds and routine patrol. It gets officers hurt and killed on the streets, in the office, in correctional facilities and in training scenarios.

What’s important now? We must continually work to create a culture where officers engage in active patrol, where every day they patrol the streets, and the cellblocks of our countries, with purpose. In his book Training at the Speed of Life, Ken Murray talks about the difference between routine and ritual. He encourages trainers to have safety rituals to ensure the safety of all participants in reality-based training scenarios—certainly a lesson we can take to the streets and the jails.

The time has come to say ENOUGH!

Enough with the excuses. Enough with turning a blind eye to these unacceptable behaviors.

Regardless of your rank, position or title, you’re in a position to be a leader in your agency, and you must find a way to inspire your brother and sister warriors to change their attitudes and change their behaviors. What’s important now is to help officers understand that failing to wear your seatbelt or your armor, responding at excessive speed and lapsing into complacent behaviors are every bit as real a threat to their safety as a violent criminal with a gun or a knife.

What’s important now is to remind officers of the pain and suffering of families, friends and loved ones who are left behind after these tragic and often preventable deaths.

What’s important now is to work to create a culture where officers, trainers and supervisors care enough about themselves, their families and each other that they challenge officers who don’t wear their belts, who refuse to wear their vests, who drive too fast to calls and who have become complacent.

As a law enforcement professional, What’s important now is for you to accept:

• You can take action.

• You can make a difference.

• You can change the culture.

These concepts are simple, powerful tools that can and will save lives if we embrace them. My challenge to you: Find a way to take these concepts worldwide to change our culture and save lives.

For more information, go to www.below100.org.

The mission of Below 100 is simple: Reduce annual line-of-duty police deaths to less than 100. The method is straightforward: Focus on areas where we can most effectively bring about change.

The true challenge comes when you actually engage with Below 100 because it involves significant change in cop culture. There’s often a good deal of resistance to cultural change. Some departments even seem to embrace a philosophy of, “One hundred years of tradition unimpeded by progress.” Don’t let tradition or stubbornness stand in the way of common sense.

Wearing seatbelts, using body armor and driving at reasonable speeds will save lives. Embracing the concept of WIN—What’s Important Now? helps to ensure officers place proper priority on their decisions. And the phrase, “Complacency kills!” is appropriate for every locker door, every briefing room and should be the mantra of every FTO. Far too often, officers who slipped into a routine or dropped their guard have paid with their lives. It doesn’t have to happen. Nowhere is it written that cops have to die in situations that could easily be prevented or avoided.

Do your part and review the principles of Below 100. Challenge yourself and challenge others. The life you save may be your own. For more information, visit www.below100.org.