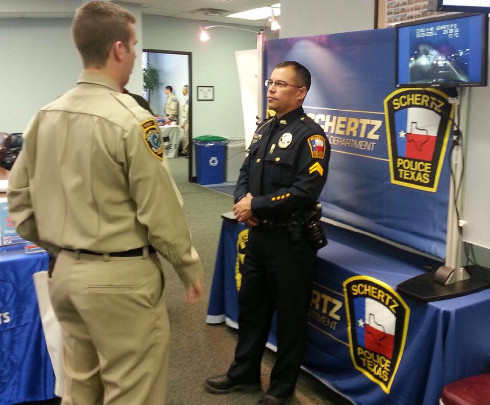 Editors Note:  Author and Trainer Travis Yates wrote about the inherent problems with law enforcement recruiting in his best selling book, “The Courageous Police Leader.” He was recently quoted in an article we ran on a revolutionary methodology of recruiting from a law enforcement operated company, SAFEGUARD Recruiting and we asked him to expand on his thoughts on this important subject. This is the first in a series of articles on Police Recruiting.

It sounds rather insulting for me to tell you that law enforcement has not really recruited in the past but if we are going to correct the path we are currently on, we need to be very honest about the topic. You don’t have to agree with me but after spending close to three decades in this profession with some of those years in charge of recruiting at a major law enforcement agency, I was wrong for many years on this topic.

I began speaking about this issue several years ago in my leadership seminars across the country and up until now, the answer to my question in class has always been the same.

“Who in this room decided to go into police work because you were recruited? What I mean is, you had no interest what so ever in becoming a police officer and you were recruited by a recruiter, a billboard or some form of advertisement, to do the job you do now.”

Once that question is posed, I have never had one cop tell me they were actually recruited to the profession. Granted, this isn’t some scientific study but if a couple thousand cops have the exact same answer, it may be time to listen.

Before that question, everyone in the room pretty much thinks we are doing all we can to recruit in a very tough environment and to be honest, I think we are doing the best we can…the best we know….but, is it good enough?

The truth is, since the inception of policing, we recruit to agencies and we don’t recruit to the profession and until recently, that has worked very well. There has always been enough candidates with the internal calling to do this job and if anything, we have had more candidates than we needed. For the first 25 years of my career, my agency turned qualified candidates away and yours probably did as well.

There simply wasn’t enough openings to satisfy the need.

So, we recruited against other police departments. The candidates were already there and it was a fight to see who got the best ones.

The problem in recent years is that we have that same mindset. We still believe that there are enough candidates but there isn’t. Yes, the political climate doesn’t help and politicians never seem to help but the truth is, the candidates have also changed.

Today’s generation of future cops don’t have the same “service” mindset as generations past. Most don’t intend to grab a job and keep it for 20 or 30 years. Many seek to mirror the entrepreneurs they grew up around and none of that is a bad thing.

it’s only bad if we don’t recognize it and adapt to it.

Law enforcement simply cannot keep recruiting as we have done in the past.

Many agencies have changed techniques, focusing on websites and digital marketing rather than career fairs but has it been effective?

If the current staffing trends is an indication, it has not.

I’m going to throw a lot at you in the coming weeks and I know I will lose many of you. Change is hard and it’s even harder if we have to admit that we may have been doing some things wrong but I believe that’s the wrong way to look at it.

Cops are savvy and we will pretty much do whatever needs to be done. You need us to talk to the media, paint a wall, mow some grass or build a computer….we will do it and for the most part, we have done a remarkable job at all of those things including recruiting (to our agency)…..But, none of that is really our job.

The corporate world spends millions of dollars and they rely on recruiting specialists to do the job so there is no shame if we haven’t exactly gotten this 100% nailed down.

I want to help but I also know the danger in flat out telling you that, as a whole, law enforcement has been wrong on the issue of recruiting.

If you can’t accept that we can do better, then I doubt any future articles will help you but I sincerely hope that you can have an open mind.

Our profession and more importantly, the communities that we are tasked with keeping safe, need us to nail police recruitment now.

If you can stay with me over the next several weeks, I’m going to give you everything I have on the topic. I can’t wait to see you in a classroom or for you you to read my book. This issue is dire and together, we can turn it around.

Do you have a question for Travis or a recruiting topic you would like him to answer. Send us a message and we will get your information to him.