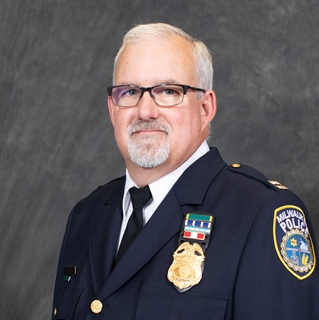 WAUWATOSA, Wisconsin — For the first time since 1989, the Wauwatosa Police Department has a new chief. After a national search, James MacGillis was named as the new chief this afternoon. MacGillis retired in January as a captain and director of the Milwaukee Police Academy. He was previously serving as the Drug Intelligence Officer for the North Central High Intensity Drug Trafficking Area program.

MacGillis was a 24 year veteran of the Milwaukee Police Department with past experiences in patrol, investigations, training and communications. The Wauwatosa Police Officers Association (WPOA) welcomed MacGillis to his new role before acknowledging the high quality of each of the three finalists for the job.

On behalf of the Board of Directors with the WPOA, John Milotzky, said that “the priority of the WPOA has always been to serve and protect the citizens of Wauwatosa, and that will continue under the new leadership.”

You can read the full statement from the WPOA here.

Chief MacGillis was preceded by Wauwatosa Police Chief Barry Weber, who served thirty years at the helm of the agency. One of the most respected chief’s in the country, Weber was awarded Law Officer’s “Courageous Police Leader of the Year Award” in 2020.

While MacGillis certainly has some big shoes to fill, we have the utmost confidence that he will lead the fine men and women at the Wauwatosa Police Department with humility and courage. On behalf of Law Officer, we would like to welcome Chief MacGillis as well.