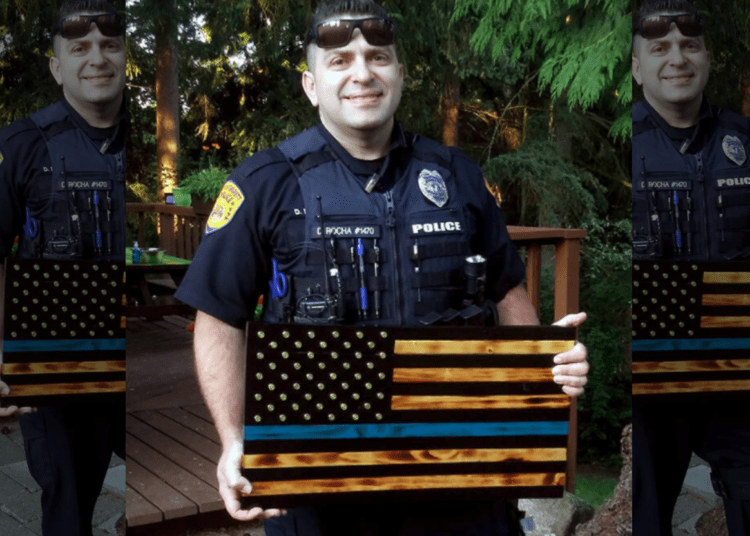 EVERETT, Wash. – A police officer in the state of Washington was killed in the line of duty Friday afternoon, authorities said.

According to a statement from the City of Everett Police Department, Dan Rocha, 41, was identified as the officer who died.

Rocha was shot and killed Friday afternoon near Everett Community College. A suspect, 50, was arrested within minutes of the shooting, following a three-vehicle crash a few miles away, Herald Net reported.

The officer’s death is being investigated by the Snohomish County Multiple Agency Response Team.

Rocha had contacted a man around 2 p.m. due to “suspicious activity” in a Starbucks parking lot. There was an altercation, and the man opened fire, fatally striking the officer said Courtney O’Keefe, a spokesperson for SMART.

George LaBauve, 24, lives nearby. He heard multiple gunshots, looked outside and saw a uniformed officer’s body on the ground.

The gunman fled the scene in a blue Mini Cooper, running over the officer in the process. The car drove fast, turned west on 10th Street, blew through an intersection, then turned left on Lombard Avenue, LaBauve said, according to the Herald Net.

Officers subsequently pursued the suspect who then became involved in a three-vehicle crash near 35th Street and Rucker Ave.

Although vehicles appeared totaled. There were no significant injuries from the crash, O’Keefe said.

According to Everett Police Officer Kerby Duncan, authorities took custody of the gunman at the scene of the collision.

“It is with great sorrow that we inform our community that Officer Dan Rocha was killed today in the line of duty,” the police department tweeted Friday night.

It is with great sorrow that we inform our community that Officer Dan Rocha was killed today in the line of duty.

Please keep his family in your thoughts during this extremely difficult time.

The name of the suspect has not immediately been released. He did not suffer any serious injuries, according to SMART. He was taken to the hospital, but was expected to be released and booked into the Snohomish County Jail, O’Keefe said.

Officer Rocha joined the department in 2017 as a parking enforcement officer before he became a fully commissioned  police officer the following year, the department said.

“He served the City of Everett as a patrol officer in North Everett for most of his career and was well respected by both the community and his fellow officers. His loss will forever leave a void in our agency and our community,” the department also said.

With extreme sadness we share another devastating loss in our law enforcement family. Everett Police Officer Dan Rocha was killed in the line of duty today. Our thoughts and prayers are with the Rocha family, Everett PD & our entire law enforcement community in Snohomish County. https://t.co/rou9Pw0hnx

Rocha is survived by his wife and two sons, according to the statement.

“Please keep his family in your thoughts during this extremely difficult time,” the police department added.

“Prayers to Officer Rocha’s family and the department during this difficult time. His service will not be forgotten,” Police Chief Orlando Rolon said in his own statement.