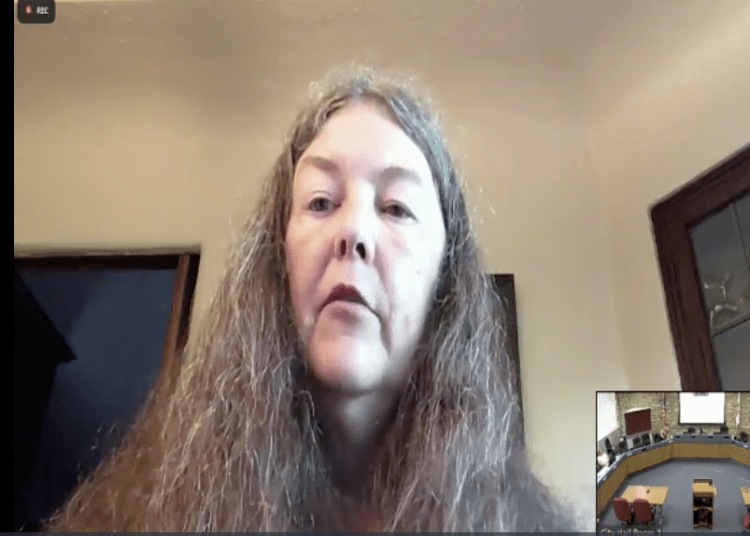 WAUWATOSA, Wisc. —  In a Government Affairs Committee Meeting held on June 8, 2021, Alderperson Nancy Welch questioned the use of no-knock warrants for criminals suspected of homicide, robbery, child pornography, and drug dealing. Her statements came after a presentation by the Wauwatosa Police department on the procedures used for no-knock warrants.

The public forum video shows Welch apparently stupefied in a mix of incompetence and ignorance—and utterly confused about misdemeanor and felony crimes. Welch outrageously suggested that violent crimes—specifically homicide, robbery, child pornography, and drug dealing—are somehow not actually violent crimes, as she mixes up crimes and criminals in trying to put two sentences together.

Welch, in response to the presentation, offered her opinion stating: “It was noted that violent crimes like homicide, robbery, child pornography and drug dealing which I agree are all crimes that we don’t like, but they are not always crimes committed by violent individuals.”

And in completely ignoring victims of violent crimes, Welch seems to offer caveats and excuses for those who commit violent crimes.

Perhaps the most absurd claims that Welched offered were that “some homicides” are not committed by “serial killers,” but by “people who have been caught in certain circumstances.”

In her “wisdom”—and sticking up for pedophiles and those who commit crimes involving child pornography—Welch declared: “I’m not aware that child pornographers are typically terribly violent.”

Welch’s comments seem borderline insane. However, she is lamenting a common theme among many politicians who are ignorantly “re-imagining policing.”

The excuse-making that Welch and others like to wokely put on display are a direct insult to crime victims and their unimaginable suffering. Most of all however, it seems Welch is flatly ignorant of the idea of crime prevention—and that sometimes warrants are absolutely necessary to bring violent criminals to justice.

Welch, in playing the game of woke politics, seems to have zero understanding of basic crime categories. As a community “leader” however, she should probably learn some basic distinctions about crime.

For starters, petty theft is NOT armed robbery. Armed robbery is armed robbery—which is a violent crime. And if Welch actually ever takes the time to speak with someone who has unfortunately been a victim of armed robbery, she might have a completely different understanding of violence—beyond the ignorance that she and other woke-minded political leaders seem to follow.

As for homicides, we are pretty sure that even though the “circumstances” may have been peaceful, at some point someone became violent. And if homicides are only “violent” when one person kills two or more people, well… perhaps Welch can better explain her rhetoric and “reasoning”… We simply have no idea what she’s talking about.

We’re pretty sure the victims of child pornography may disagree with Welch.

Likewise, the FBI may disagree with Welch’s “re-classification” and “re-imagination” of child pornography suspects and violence. Clearly, Welch and other woke-supremacists should remember how FBI Special Agent Daniel Alfin and Special Agent Laura Schwartzenberger were both killed in February—while executing a warrant on a suspected child pornographer.

Lastly, Welch and other politicians who are lost in their own re-imagination, will better serve their constituents by actually understanding criminal law in their community and state.

And if dare be so bold, Welch and others would do well to remind themselves of another founding principle of law enforcement, dating back to the early 1800s, as another of Peel’s principles explains that the purpose of policing is:

“To seek and preserve public favor, not by pandering to public opinion, but by constantly demonstrating absolute impartial service to law…”

Clearly, Welch is pandering to public opinion—and ignoring reality. And she is clearly ignoring the unfortunate victims of violent crimes.

Nancy Welch is an Alderperson in Wauwatosa District 3.

She can be contacted at: [email protected]

Help us stand up and take action!

Law Officer is currently working with a group of victims of violent crime to meet with Welch and discuss her views and leadership.

In the meantime, please help Law Officer send a message to the Wauwatosa City Council that Alderperson Nancy Welch should be censured for speaking to the public about issues regarding policing and violent crime.