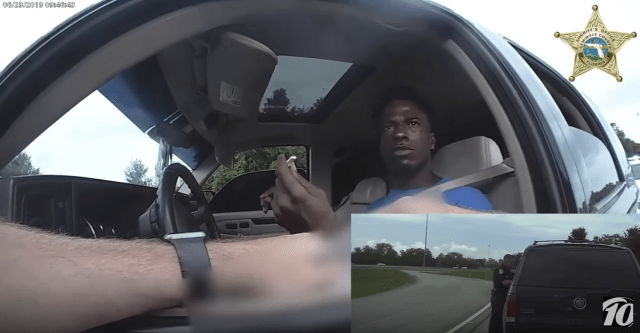 SEMINOLE COUNTY, Fla. — A man is in custody after authorities said he dragged a deputy around 100 yards while fleeing a traffic stop, which created an OIS. When asked how many rounds were fired by the deputy, the sheriff said, “[P]robably not enough.”

Officials said a deputy was performing a traffic stop on a Rocky Rudolph Jr., of Apopka, for dark-tinted windows.

Sheriff Dennis Lemma said the deputy was having a casual conversation with Rudolph, explaining the law on window tint, reported WESH.

During the detention, officials said the deputy smelled marijuana in the vehicle and asked Rudolph to turn off the engine.

Rudolph told the deputy he didn’t have a medical marijuana card. Moreover, he refused to turn the motor off, officials said.

Authorities said Rudolph became aggressive during the conversation and then combative.

As a result, the deputy pulled out his firearm and ordered Rudolph to turn the car off and put his hands up, deputies said.

Lemma said Rudolph then reached for the deputy’s gun hand and held him before taking off and driving 100 yards toward I-4.

The deputy fell from the car and rolled into the median.

Authorities said Rudolph continued to drive before stopping and jumping a fence into a residential area, sparking a large response from multiple agencies in Seminole County.

An officer from Belle Isle spotted a person who matched Rudolph’s description running from the wood-line and jumping into a vehicle.

Investigators cornered the vehicle, which was driven by the suspect’s daughter, and took Rudolph into custody, Lemma said. This occurred about eight hours later, according to the Orlando Sentinel.

WANTED SUSPECT: Identified as ROCKY M RUDOLPH JR of Apopka. Please Call 911 if you know is whereabouts or have information. pic.twitter.com/p6GOK3pH7z

The deputy involved, identified as Aaron Blais, was taken to a hospital and has since been released, Lemma said.

During the incident, Blais fired into Rudolph’s SUV, striking him in the leg, Lemma said. It’s unclear when Blais discharged his gun or how many bullets he fired.

“I don’t know how many rounds were fired into the car, but it was probably not enough,” Lemma told reporters.

“This is a bad dude, who almost killed one of our sheriff’s deputies on the side of the road,” Lemma said.

Officials said they found a gun in the car, as well as a gun that they said he threw into bushes.

Lemma said considering what the deputy had been through, he is in good condition.

Lemma said he was “absolutely convinced that Rudolph was reaching for his gun” during the incident, and that body camera and dash board footage, which the Sheriff’s Office said they will release, will “clearly show that.”

Rudolph is facing charges of attempted murder of a law enforcement officer and aggravated assault, among others, Lemma said.