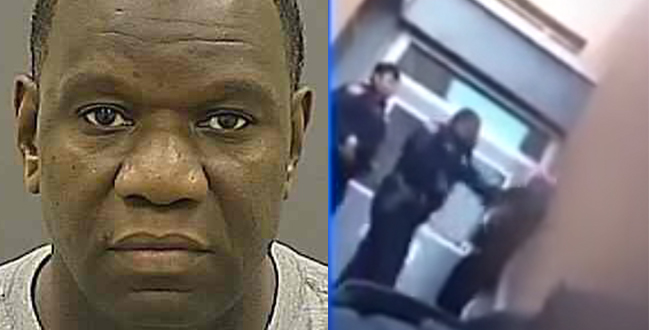 A Baltimore school police officer caught on tape slapping a student pleaded guilty Tuesday afternoon in a deal that allows him to clear his record but requires him to step down from his job.

Anthony Spence, 45, entered an Alford plea, in which a defendant maintains innocence but accepts punishment, to one count of second-degree assault.

Spence accepted an offer from Circuit Judge Charles Peters in which he will receive probation before judgment and be placed on supervised probation for 18 months. He must resign from the school police force within 90 days.

Prosecutors said they had offered three years of prison time, with all but 60 days suspended, followed by two years of supervised probation, community service, and Spence’s resignation from the force.

Spence faced a maximum possible sentence of 10 years if convicted.

The student was enrolled as a student at the time but was accused by the officers of trespassing and asked to leave school grounds. Prosecutors said the teen did nothing to provoke the attack.

The teen had a knife clipped to his belt and he cursed at spit at officers. The teen has since been arrested and convicted for a robbery that occurred in Patterson Park.

Share and speak up for justice, law & order...
Tags: baltimore policeNewsschooluse of force