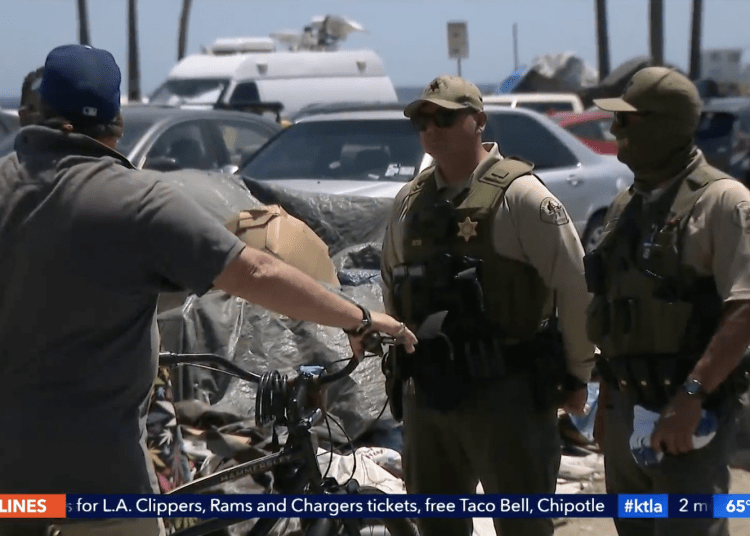 VENICE BEACH, Calif. — In the past, Venice was better known as “Muscle Beach” as it houses an outdoor gym that was home to some of the the biggest names in bodybuilding and film, including Franco Columbu, Lou Ferrigno, Arnold Schwarzenegger and Frank Zane. But things have changed as the boardwalk has become home to the homeless, and local residents are none too happy.

Consequently, tensions are rising as the debate on how to handle the growing homeless crisis at Venice Beach continues. The controversy comes after Los Angeles County Sheriff Alex Villanueva deployed deputies this past week to LAPD jurisdiction, which has created a political hot potato between lawmakers and law enforcement, KTLA reported.

The “battle” taking center stage is between Sheriff Villanueva and L.A. City Councilman Mike Bonin, who has represented the area since 2013.

The Los Angeles County sheriff sent deputies to Venice’s Ocean Front Walk on Tuesday to assist those living in encampments with signing up for services and informing them of available resources.

Yet the help was apparently not appreciated as it drew harsh criticism from Bonin. As a result, the city representative posted an extensive Twitter thread where he detailed a list of controversies faced by the Villanueva administration, according to KTLA.

Villanueva spoke with the local news organization Saturday, saying that he didn’t deploy his deputies to disperse people in Venice, but trying to assess individual needs.

“Our homeless outreach service team has been working for eight years breaking up homeless encampments throughout L.A. County in areas you typically don’t see,” he said. “They were out there on the boardwalk actually talking to the homeless and trying to assess the situation of each individual.”

Villanueva did not criticize LAPD, but pointed out that Bonnin is not doing his job as approximately 200 encampments have sprouted in the past year, KTLA reported.

“They’re doing the job that the City of L.A., Mike Bonnin refused to do in his own district,” Villanueva said.

Continuing, the sheriff highlighted, “The only people who are upset are the political establishment who are responsible for doing nothing.”

“If you survey the residents of Venice right now, they are jumping for joy that something is finally happening,” he added.

The sheriff would like to clear the Venice boardwalk area of homeless encampments by July 4.

Residents wait to see if Bonnin will obstruct or partner in the movement.