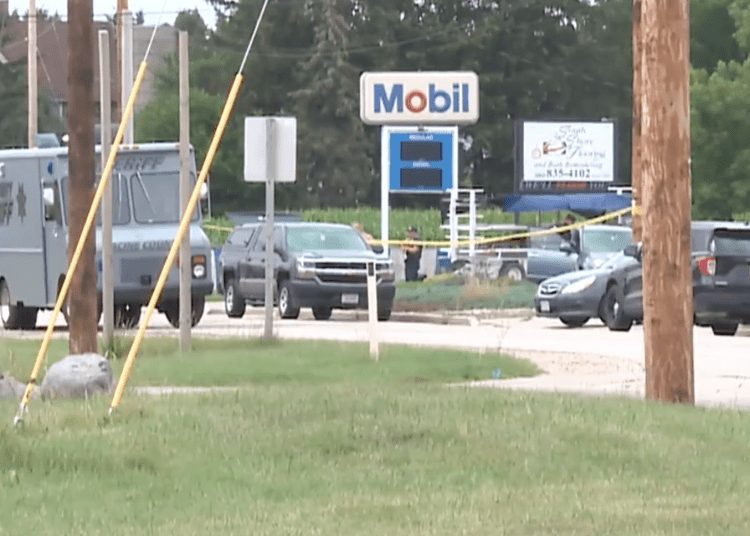 The scene of the fatal OIS. (Screenshot WGN)

FRANKSVILLE, Wis. — A maniacal gunman appeared to randomly execute a man filling up his car at a Wisconsin gas station on Tuesday. After fleeing the scene, the suspect was apparently preparing for an encore when he faced off with an undercover sheriff’s detective. A gun battle ensued and the deputy was wounded while the gunman was killed.

Racine County Sheriff Christopher Schmaling said the first shooting occurred about 7:30 a.m. at the Pilot Travel Center in the village of Caledonia. According to the sheriff, a 32-year-old male suspect approached and “viciously executed” a 22-year-old man putting gas in his car, WGN reported.

Schmaling said the gunman then shot at another individual driving through the parking lot. Fortunately, that person was not injured before driving away.

The suspect fled from the Pilot and arrived at a Mobil gas station about 2 miles away. The sheriff said the gunman approached a person filling up his car at that location. But this was no ordinary citizen. It was an undercover detective with 21 years of law enforcement experience, Schmaling said. The two men exchanged gunfire. The investigator was wounded but not before the suspect was struck several times and killed.

The injured undercover detective was taken to a nearby hospital, where he was conscious and alert, the sheriff said.

“It should be noted, ladies and gentlemen, this is 7:30 in the morning at this Mobil station. It was bustling with activity. People getting their gas. People getting their morning cup of coffee. There is no doubt in my mind the quick, heroic actions of our investigator saved lives today,” he said.

Schmaling said he had the opportunity to view video of the first shooting at Pilot. He described it as an “execution” that seemed to lack preceding action leading to the homicide, according to WGN.

The sheriff did not provide names of the deceased gunman or victims. However, he said the suspect was from Hartland and the murder victim was from Elkhorn.

One witness to the Pilot shooting, just off Interstate 94 south of Milwaukee, described “a sea of people” fleeing from the scene.