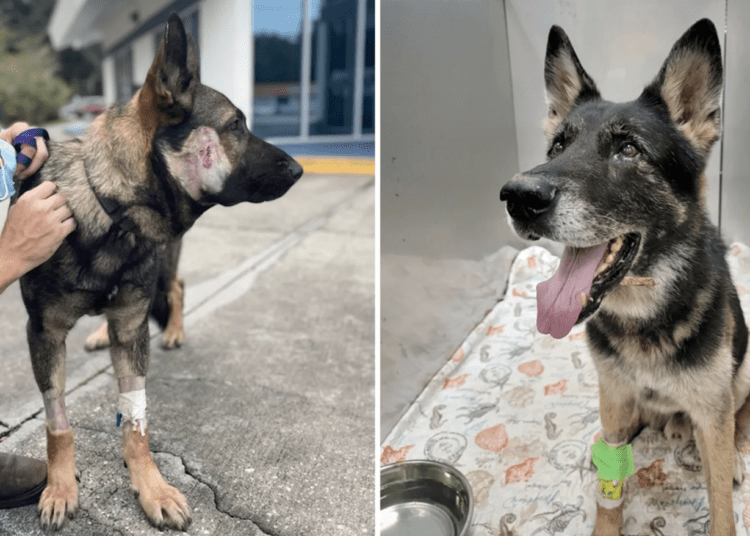 K9 Ax was shot in the side of his face just after midnight while K9 Endo received gunshot wounds to his chin and paw nearly two hours later after separate confrontations with the suspect, who had fled into a wooded area, the Volusia County Sheriff’s Office said.

“There is no doubt that K9 Ax and K9 Endo took bullets that were meant for my deputies,” Sheriff Mike Chitwood said in a media briefing Saturday afternoon. “If the deputies would have gone into the woods, the first person to come in contact with Singleton, without a doubt, would have been shot.”

During his comments, the sheriff praised the K9s, saying both had to be pulled away from the suspect even after they were shot.

The series of crimes began early Saturday after the suspect directed his Lyft driver to take him to an isolated area where he proceeded to carjack the victim, taking the white Kia Sedona minivan at gunpoint.

When deputies located the vehicle, the suspect fled on foot into a wooded area, Fox News reported.

VCSO released dramatic bodycam footage of the shootings and deputies rushing to assist K9s Ax and Endo, their loyal partners.

K9 Ax had been tracking the suspect for about 10 minutes when he was shot. The suspect then fled deeper into the woods.

As law enforcement personnel from several agencies closed in on the suspect, he was spotted running out of a wood line around 2:20 a.m. As pressure was applied, there was an exchange of gunfire as the suspect refused to surrender.

Shedrick Singleton Jr., 21, was identified as the suspect. He was struck several times during the gun battle. Consequently, he was transported to the hospital with life-threatening injuries, according to authorities.

Deputy A.J. Davis rushed his partner, K9 Ax, to the Animal Emergency Hospital Volusia in Ormond Beach. In a gracious move, the Daytona Beach Police Department sent its own K9s to the clinic to donate blood for Ax.

Both K9s were back on their feet Sunday and are continuing to recover.

K9 Endo is in line for his second Purple Heart after having previously been awarded one by the sheriff’s office when he was shot in the neck responding to a domestic violence call in 2015. He was also awarded the Medal of Valor after the shooting.

Singleton faces charges of armed carjacking and use of a deadly weapon against a police K9, Fox reported.

Editor’s note: YouTube censored VCSO’s video, but you can view it here.