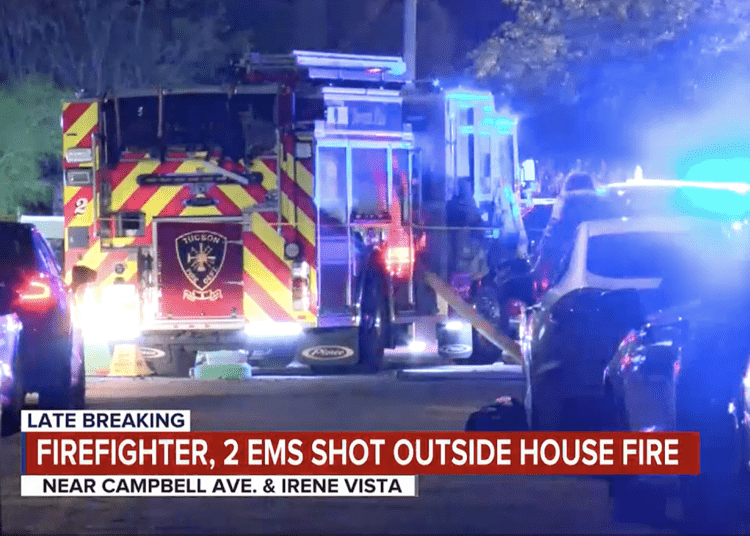 TUCSON, Ariz. — Two people were killed Sunday, and several more were injured in the multiple shootings at a residential fire. Tucson police Chief Chris Magnus said on Sunday the series of crimes began with a call about the fire near South Campbell Avenue and East Irene Vista at 3:45 p.m.

Details of the shootings are still being sorted out and investigated, but things began when city firefighters received a call about a structure fire. At about the same time, police said a gunman opened fire on an ambulance crew that had been in the area on another call, but was staging to assist at the scene of the fire, KOLD reported.

Magnus said the suspect, an unnamed 35-year-old man, opened fire on the EMTs. A 20-year-old first responder was shot in the head and is listed in critical condition. A second 21-year-old EMT received gunshot wounds to the chest and arm. That person is reportedly in stable condition, according to the chief.

Magnus said the 21-year-old EMT was able to call for help and describe the suspect and his vehicle–a silver SUV.

After the first shooting, the suspect fled in his vehicle to the scene of a nearby residential fire that was burning near 2100 E. Irene Vista. Magnus said the armed man then reportedly began firing his weapon at personnel from the Tucson Fire Department. The gunman also fired at bystanders, KVOA reported.

TPD said a veteran fire captain of 17 years was struck in the arm and a bystander who lives in the neighborhood was grazed by a bullet in connection to the shooting at the fire.

News 4 Tucson has confirmed through our sources two AMR EMT's and a Tucson Firefighter have been shot. My thoughts and prayers are with them tonight. Stay with News 4 Tucson for the latest information.

Another neighbor, later identified as a 44-year-old man, was shot in the head. He was pronounced dead at the scene, according to the news outlet.

Responding officers engaged the suspect and exchanged gunfire with him. At one point, the gunman tried to ram his SUV into a police vehicle, KVOA reported. He was eventually stopped by police gunfire and is reportedly listed in critical condition. Another victim, whose body was charred, was recovered from inside the home. The body was not identified, Fox reported.

TFD responded to a report of a house fire in the area of Campbell and Irene Vista. Suspect fired multiple rounds at TFD personnel. An Officer located the suspect while responding to assist TFD, gunfire was exchanged and the suspect was struck.

First reports of the horror filled day said the whereabouts of three minors “associated with the residence” were unknown.

However, police have confirmed that children who were unaccounted for after the deadly shooting spree and house fire on Sunday have been located and are safe, according to KOLD.

“We are shocked and saddened at this senseless act, and we are praying for our injured partners from AMR Ambulance,” Ryan wrote on Twitter. “Also, I am thankful for the swift actions of our #TucsonPolice to neutralize the threat to the community. More to come, but a dark day for Tucson.”