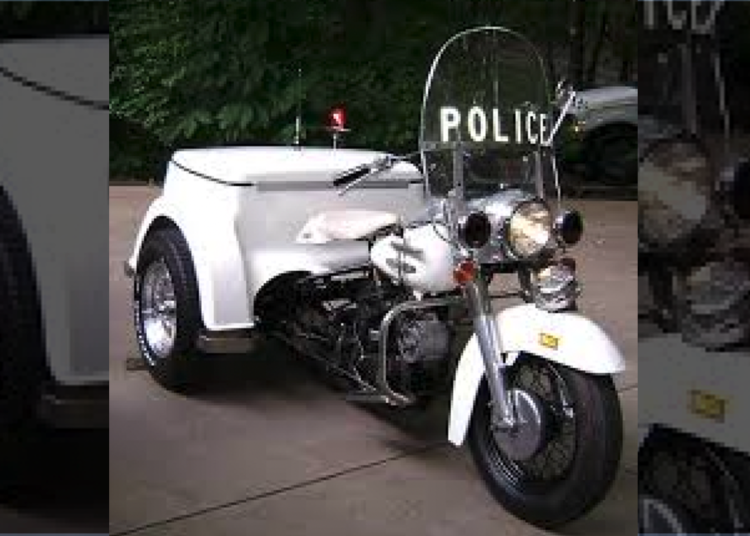 A lot of management policies stress the importance of keeping your workforce “engaged.”

In law enforcement that means keeping the troops busy, even if you have to make up work for them. Otherwise, the grunts will start getting restless, invent dangerous things to do, and generally make their next level of supervisors look bad.

I was therefore required to “be busy” all the time.

I showed up one Monday afternoon to find I suddenly had in-house transfer orders, specifying that I was about to be “trained in court legal paper service, and community resource delivery.”

Translation: The retired-while-at-work-officer who did all the tedious paperwork shuffling was going on “medical leave” for 60 days, and I was tapped to fill his shoes.

Being chronically short of radio cars, I was going to have my own three-wheel Harley Davidson motorcycle!

When I rolled into Central shops on Tuesday to claim my new ride, I found that this tricycle zoom-zoom was (to my mind) unsuited to have me seen in public riding it.

Over the years, I had learned to be openly appreciative of people who were able to “assist” you in making lemonade out of whatever you happen to step into. I quietly asked the lead mechanic Ronny what could be done about the situation. In passing, I happened to mention that I knew two mutual friends of his: Blackjack, and his sister Ms. Red Label…

Attach: Parking controllers are civilians and had no need for the red lights and the police siren that I did.

Detach: The engine actually had an engine governor that kept it below 35 MPH! That gizmo was gone before I had made it to the end of the block.

Fortunately, the Vehicle Repair Shops are quite close to the Uniform and Supply Division counter at the Hall of Justice. I needed a motorcycle helmet, gloves, and (dream on) the highly sought-after SFPD leather moto jacket.

While I didn’t have to revisit Frank at the bar across the street, I did make certain assurances about how many Toco Loco mega burritos would make their way to the employee lunchroom down the hallway.

I got generally everything I needed, except no amount of free food could pry those leather jackets from protective custody.

Faster than you can say Human-Resources-Liability-Insurance, I was scheduled into a 5-day training program.

The silver lining here was getting thinner by the minute.

In my temporary absence, all of the paper-pushers at Mission had been evilly conspiring to make my seeming cush detail less than fun. When I regally strolled into my Station, I found that my inbox looked like an over wrought paper recycling bin.

My protests and wheedling aimed at my lieutenant (with a broadly hinted at a brown bag delivery) met with limited success. The best take-away I could manage was the caveat that IF I finished my daily flitting about doing paper delivery, I could try and do actual police work.

It was better than nothing.

Fortunately for me, the San Francisco bureaucracy being what it is, about 60% of the “time sensitive” correspondence I reviewed had expired BEFORE they even sent it to me for dispersal.

I called up the city office listed at the top of the master delivery form, and feigning innocence, (and NOT giving my correct name), asked what to do if a few items were past their due date?

Mr. Such-and Such told me “not to worry, just send them back with a note.”

Yes, I DID get his name and title spelled correctly.

The “note” quickly became a xeroxed boiler-plate form that I cobbled together using Such-and-Such’s name in prominent places. I then stapled that excuse to all of those wonderfully delinquent tedious papers that I no longer had to worry about.

I had the obviously mistaken idea that I knew where things were in my district.

Of course, a lot of these charming places were not listed anywhere I could find. I had a more than sneaky feeling that a lot of these legal documents were going to places that existed only in the heroin infused minds of junkies who invented their places of residences when caught by the cops in a drug bust.

I was used to people claiming that their names were “Donald Duck,” “Mickey Mouse,” or even “A. Hitler” during the traffic stop citation process, but “Cmdr. Spock, 1701 Vulcan Staircase”?

(Turns out that this actual alley only had numbers from 1-30.)

A bonus was that if I left the station at 0700, I could legitimately miss the 0730 lineup and roll call and thereby get the freshest doughnuts with coffee before the other blue suits pillaged Hunts Bakery.

Hint: If you can’t locate an address find the local postal carrier, ask him/her. They know EVERY street literally from the ground up. In this case, I huddled with several of them while at Hunts. The price of their coffee was more than worth it in my time and anguish saved.

After paper service, I’d zoom around, picking off low-hanging fruit like cars triple parked with their engines running outside of liquor stores, drug salesmen who thought they were safe in streets that cars couldn’t go down, and the usual urban idiots who thought that because I wasn’t in a squad car, they didn’t have to pay attention to me.

Cadillac Man parks blocking a very clearly marked loading zone while he lounged around in a dive bar across the street. He had to be up to no good because he was in Docs Clock Bar before 10 a.m., so I therefore decided to tag him with a parking ticket just on principle.

As I’m finishing up the cite, he boils out of The Clock at a dead run, while yelling at me.

(Geeze buddy, you eat with that mouth?)

Not content with maligning my ancestry and choices of sexual partners, he proceeds to actually knock the cite book out of my hands and reach for the front of my non-leather moto jacket.

It would most likely take a good slow-motion camera to record what happened next, because I’m not sure if his face hit the ground before, or after I threw him over the front wheel of my bike.

Three semesters of varsity college wrestling, five years of foot beat work, and 17 years of judo training combined to convince him of the error of his ways.

(My Sen Sai, Ito Nishida-San would have approved of this interaction, except to note that I dropped my pencil in the process.)

As Cadillac Man started to rise up from the pavement for what he hoped was round two, he immediately got the idea that the discussion was over when he looked up at me over the long barrel of my .357 magnum wheel gun pointed just south of his eyes.

After I towed his car, I tucked the $85 parking citation unseen into his jacket pocket as a sort of a surprise going away present from the SFPD.