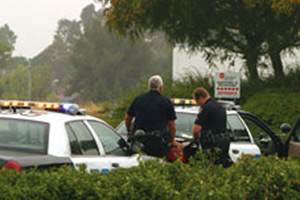 Two recent events thousands of miles apart prompted this month’s column. First, I was asked to review a fatal traffic-stop incident for a large police agency in Australia. A senior constable conducting a traffic stop on a freeway was struck by a driver who apparently fell asleep at the wheel. The driver never hit the brakes or even slowed down. The constable died instantly of full impact blunt-force trauma.

The second incident occurred here in the United States, involved an officer from a large Midwest agency and resulted in the fatal shooting of two young adults. A vehicle wanted for speeding and evading tried to outrun the officer late one night. The driver shut off his headlights and coasted into a dark driveway. The officer, who followed the suspect into the driveway, exited his squad car and approached the vehicle, which started to roll back. Because of his position directly behind the suspect s vehicle, the officer felt he was going to be struck and fired twice into the vehicle, fatally striking the driver and a rear-seat passenger. The vehicle had heavily tinted windows and the number of occupants wasn t known.

In both instances, passenger-side approaches could have prevented the tragedies. The Australian constable might have been safer standing alongside the passenger side of the vehicle well off the travel portion of the freeway. Likewise, the Midwest officer, had he opted for a more tactical approach (i.e., illuminated the vehicle with his spotlight and walked behind his squad car up to the passenger side of the vehicle), or better yet, waited for backup before approaching at all, could have avoided placing himself between his squad car and the rearward rolling vehicle. Ironically, both officers, the Australian constable and the U.S. officer, had been trained in passenger-side approaches.

Passenger-side approaches have been an option for U.S. officers for many years. The dangers inherent in walking up to the driver s door on traffic stops have been addressed in most basic academy curriculum and in-service training classes for years. The U.S. Supreme Court even wrote about it when it decided Pennsylvania v. Mimms back in 1977 when reviewing the issue of whether police officers can legally order drivers out of their vehicles on traffic stops. The Court discussed those dangers again 20 years later in Maryland v. Wilson when they extended the authority to include passengers in lawfully stopped vehicles.

Tactically speaking, passenger-side approaches are a lot safer than traditional driver-side approaches. First and most obvious, it removes the officers from the travel lane while they conduct their police business, certainly a factor when it comes to freeway, expressway or thruway stops. Second, it allows for the element of surprise when either the circumstances of the stop (a chase or other unusual activity) or that cop sixth sense intuition warns you that something just isn t right with either the driver or the passengers in any stopped vehicle. Furthermore, there is some evidence that officers actually see more when making passenger-side approaches.

A study conducted in California a few years back on this exact issue showed that 90 percent of officers who made traditional driver-side approaches up to a vehicle on a staged, routine traffic stop missed an armed suspect secreted in the back seat. However, when a different group of officers under the exact same set of circumstances were asked to make a passenger-side approach, 100 percent saw the armed suspect crouched down in the back seat. Whether this was because the second group of officers didn t have to worry about getting struck by passing traffic isn t known, but the statistics speak for themselves. Passenger-side approaches are tactically safer.

Regardless of how you decide to approach any stopped vehicle, always keep these four basic concepts of vehicle/traffic stops in mind:

1. Remember the driver s blind zone, that area outside the range of the rear-view or side-view mirrors. The further out from the vehicle you walk, the harder it is for the driver to see you. Keep in mind that on driver-side approaches, especially on a heavily traveled road, that tactic might prove dangerous because it exposes you to passing traffic, but on passenger-side approaches, it can be a real plus.

2. Remember the safety zone or safety corridor, that 1/2-lane width (or more) you should have if you ve positioned your car properly to the left of the stopped vehicle.

3. When conducting passenger-side approaches, try walking behind your squad car to get to the passenger side, especially at night. It prevents you from walking across your headlight and spotlight beams, and it also keeps you out of that danger zone between the front of your car and the rear of the stopped vehicle.

That’s it until next time. Stay safe!