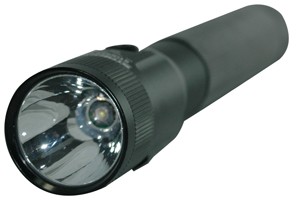 You could argue that a police officer’s most valuable tool is not the sidearm, but the flashlight. You’d be hard-pressed working a night tour without this indispensable aid. In poor light, flashlights help us navigate, probe the unknown and locate and assess potential danger. If necessary, its light beam can be used as a measure of force or as a means of delivering accurate fire.

Human beings are diurnal rather than nocturnal creatures, and we don’t function particularly well in the dark. Sight remains our primary sensory receptor and when our vision is severely handicapped, performance suffers accordingly. Over 80 percent of the information our brain processes is done through the eyes. We also need to factor in that almost 100 percent of the information a law enforcement officer needs in order to make that critical shoot/don’t shoot decision, must also be processed through the eyes. When denied our primary sensory receptor, bad decisions are inevitable.

A study1 conducted by Dr. Paul Michel illustrated that law enforcement officers are incapable of reliably making a distinction between potentially lethal and non-lethal objects in low-light conditions. Police recruits with either 20/20 or 20/20- corrected vision were shown a series of objects which included common household implements and a stainless steel 9mm pistol. In the lowest light setting, accuracy in identifying the various objects was very poor. Predictably, as light levels increased, accuracy in determining the nature of the objects improved, but was hardly perfect. In summary, Dr. Michel concluded that in light levels of less than .5 foot-candles, it’s impossible to reliably determine what someone is holding. An artificial light source is absolutely essential for every law enforcement officer, regardless of assignment.

The earliest flashlights created specifically for the law enforcement market were large, cumbersome affairs with external dimensions similar to a Louisville Slugger. By the late 1970s, rechargeable flashlights with nickel cadium batteries came on the scene, and things haven’t been the same since. Today’s flashlights are but a fraction of the size of those early torches and boast far greater light output. New generation lights are extremely rugged, utilize superior power sources and often feature LED (light emitting diode) lamps, which are not prone to mechanical failure.

Technology continues to march on. Today, there’s a bewildering array of small, tactical lights with capabilities far beyond what we even imagined a few short years ago. These lights afford the patrol officer, tactical specialist or plainclothes investigator the ability to carry a quality flashlight (or two) on their person at all times. Even if you work steady day tours or are handcuffed to a desk, there’s simply no excuse for not having a light. Lights give us the ability to make informed decisions.

FIRST-LIGHT USA www.first-light-usa.com
Since flashlights were invented 120 years ago, they’ve followed a familiar theme. Most flashlights consist of a tube containing batteries with a lamp at the end. First-Light USA has broken the mold and developed a series of lights built around the user rather than the batteries. Their Liberator and Tomahawk flashlights are indeed very different than anything that has come before, but are in fact extremely well thought-out designs.

Last year, I acquired a Liberator LP, which is without question the most unique flashlight on the market. Salient features of the Liberator include its angle head lamp and carry handle. The ergonomic handle slides over the fingers to the palm of the support hand. The tube portion containing the batteries is positioned vertically on the back of the hand with the angle head facing forward. This hands-enabling feature allows the user to perform tasks such as opening a door or climbing a ladder without any sort of handicap. Gun-handling skills such as loading or clearing stoppages can also be performed far more efficiently.

Switch activation is easily accomplished with the support-hand thumb. The Liberator is capable of momentary or constant-on illumination and also sports a task light feature for up-close examination of small objects. My original Liberator LP puts out 80 lumens of light; enhanced versions capable of 120 lumens with additional features are now available.

Another new angle on tactical lighting is First Light’s Tomahawk. The Tomahawk family also features an angle head lamp and similar switching features of the Liberator. Instead of the handle, the Tomahawk uses a patented Finger Retention System to stabilize the light to the support hand. A MOLLE-Ready Retention Clip secures the light to the vest or belt.

The sample Tomahawk received for evaluation was the LE model, which puts out 120 lumens of blinding, white light. If that wasn’t enough, the LE model also boasts strobe capability and a red, blue and white emergency flasher. With just a little practice, I was able to draw the Tomahawk from the belt, insert my index finger in the Retention Loop while driving the light and pistol to eye level. Once again, switch activation is accomplished with the support-hand thumb.

INSIGHT TECH-GEAR www.insighttechgear.com
Insight Tech-Gear is widely regarded as a world leader in the development of weapon-mounted lights, laser aimers and surveillance and sighting equipment. This year, Insight has introduced a series of cutting edge tactical flashlights that will not disappoint.

The new H1X Proxima is a shockproof, high-intensity LED flashlight with a multi-function tail cap activation switch. Constant-on, momentary, strobe and a dimming function are all controlled by the push-button tail cap switch. Peak output is 80 lumens; however, the dimming mode gives the user the option of cycling down through the various brightness levels to the desired setting. A single 123 3-volt lithium battery provides a run time of 90 minutes on the highest setting.

The Proxima is constructed of aluminum and wears a black anodized finish. Its reflector is made of precision machined aluminum. Both the bezel and tail cap are crenulated to give the Proxima greater capacity if used as an emergency impact tool. Other qualities include a knurled exterior, a retention clip and lanyard.

Its sibling, the H2X Arcturus incorporates all the desirable features of the Proxima but with a more powerful lamp and a rechargeable lithium-ion battery. Peak output is 120 lumens with a run time of two hours on the highest setting. A charger is included in the Arcturus package. Users who favor a small tactical light as their primary illumination source may come to favor the rechargeable H2X Arcturus.

In addition to the Proxima and Arcturus, Insight Tech-Gear is also marketing the H3X Regulus. The 9-volt Regulus is powered by a trio of 123 lithium batteries and puts out a whopping 160 lumens of white light.

PENTAGONLIGHT www.pentagonlight.com
PentagonLight recently introduced the K2 Porcupine, a small tactical light that doubles as a self-defense tool. The K2 is relatively small at 5.5 inches and is powered by a pair of 123 lithium batteries. Its Xenon gas-filled lamp puts out 70 lumens of white light, enough to overwhelm the night vision of an aggressor. Crafted from aluminum, the K2 is finished in military olive drab. A removable retention clip secures the K2 to the trouser pocket. Momentary and constant-on activation are available through a tail cap switch.

What makes the K2 Porcupine unique is the ring of sharpened spikes around the bezel. The spikes are protected by a rotary shield when not needed. A quick counterclockwise turn retracts the spike protector to expose the spikes. The tail cap is crenulated to provide another nasty striking surface.

The use of flashlights as striking weapons remains a controversial area. There is, however, no doubt that tools such as the K2 Porcupine would be most effective under certain circumstances.

SUREFIRE www.surefire.com
SureFire markets the most extensive line of high-performance flashlights and the E1B Backup remains true to the firm’s tradition of excellence. SureFire’s engineers have managed to pack big light performance into a very small package. This is truly a “stash it and forget it” light that can be carried at all times. The E1B is perfect for plainclothes operators and as the name implies, it’s an excellent backup light for uniformed patrol officers.

The E1B is equipped with a Total Internal Reflection (TIR) that creates a flawless bright beam. Its virtually indestructible LED has no filament to break or burn out and lasts for thousands of hours. Made of aerospace-grade aluminum, the E1B wears a hard black anodized coating and its melted body contains no sharp edges or knurling to catch onto or wear clothing. A pocket clip allows the E1B to be carried bezel up or down.

Like all SureFire lights, activation is done by depressing a tail cap switch. The E1B however, gives the user an option of either high or low settings in both constant-on and momentary modes. Depressing the tail cap will instantly deliver the maximum output of light rated at 80 lumens. Release and press again within 2 seconds and the light trips to its lowest 5 lumen setting, perfect for map reading, ID check or navigation. Power is supplied by a single 123A lithium battery.

Another SureFire product that rates a hard look is the G3 LED Holster Kit. The G3 LED flashlight features the same high-quality lens, reflector and tail cap activation switch as other SureFire offerings. Three 123A lithium batteries give the G3 an extended run time of 9.42 hours with 5.8 hours of tactical level light. Maximum output is 80 lumens. The G3 is constructed of polymer and aerospace-grade aluminum and features a non-slip gripping surface.

The kit features a rugged polymer holster with an integral magazine that holds three spare batteries. This gives the G3 the capability of over 18 hours of continuous run time in the field, far longer than any rechargeable. The reversible ambidextrous holster is adjustable to accommodate personal preferences and draw times of pairing the light off with gun are indeed very snappy.

The evolution and introduction of small, high-performance flashlights has definitely cut into the popularity of the heavy, ni-cad rechargeables. The big old school lights are still useful, particularly for many routine, administrative tasks. But when going in harm’s way, most professionals will be far better served with one of the easier to manage, smaller tactical lights. With dozens of different options available, there’s simply no excuse for being caught without a light.

A Bright Idea
Law Officeris committed to bringing you information about the latest gear, and we plan to get our hands on and check out a new and potentially revolutionary tactical flashlight hitting the market this spring: 5.11 Tactical’s Light for Life tactical flashlight.

In designing the flashlight, 5.11 Tactical partnered with IVUS Technology and says it consulted with more than 1,000 public safety officials, including those from law enforcement, to learn about what they need in a tactical light.The result:A tactical flashlight that reportedly recharges in 90 seconds, operates without batteries, can pump out a 240-lumen burst and will potentially last a life time.

At press time, 5.11 planned to demo the flashlight at the IACP expo in San Diego this month and put it on the market in March 2009.