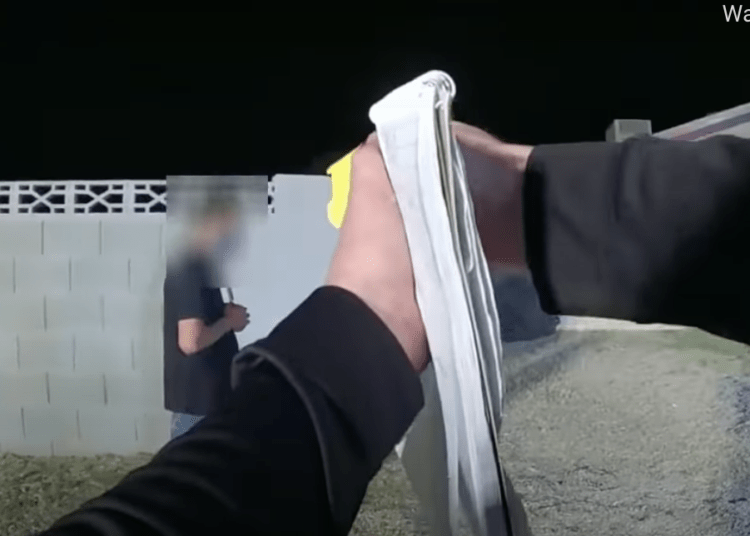 Glendale, Arizona – A man holding a large knife to himself at a structure fire in Glendale was injured after after a Glendale police officer tased him. After being tased, the man fell on his own knife. According to IBT Times, officers had responded to a “suspicious” fire just after 6 p.m. on November 23, 2021. When officers arrived at the scene, they spoke to a man who was behaving suspiciously, according to police spokesperson Sgt. Randy Stewart on Wednesday.

Body camera footage of the incident was released the next day.

The officer can be heard telling the man not to go inside the house when he pulled out a knife.

Knife wielding man refused police orders to drop the knife, and is tased. The knife impaled the man’s neck as he fell forward to the ground. pic.twitter.com/yMDNWEGoE3

Upon seeing the knife, the officer tried to grab the knife from him. The man refused to comply and walks away. The officer, once again, tells the man to “put the knife down” but the man instead holds the weapon close to his chest and neck.

After the man, who was later identified as the possible arson suspect in the fire, refused to follow orders from the officer, he was tased but felt forward as the knife was pointed at his neck.

The officer lunges forward as the man falls in an attempt to grab him and cuts himself in the process. “The knife is in his neck,” the officer says as he tries to roll the man over and pull out the knife.

The entire body camera video is below:

The man was eventually treated for his injuries and transported to a local hospital. His condition has not been released.

Share and speak up for justice, law & order...
Tags: arizonaglendaleknifemust-readtaser