The suspect defecated himself upon being taken into custody 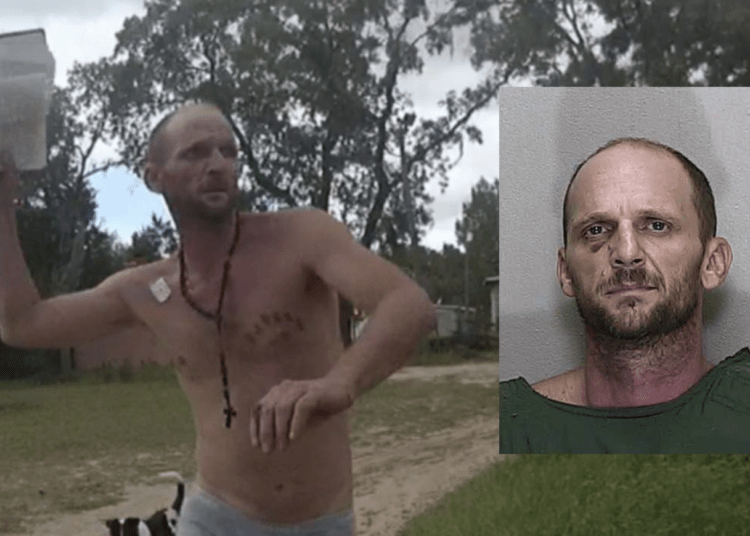 MARION COUNTY, Fla. – A Florida man was tased and arrested last Tuesday after he reportedly kicked in a neighbor’s door and threw a Bible at a sheriff’s deputy, according to reports.

Deputies said the victim called them on Sept. 22 because he returned to his home in Summerfield after being gone for about an hour and found that his door had been kicked in.

Hoskins had asked the victim to borrow clothes and when the man declined, he waited until he left and kicked down the door, according to the affidavit.

Deputies said as they arrived at the scene, Hoskins approached them while only wearing underwear, yelled something along the lines of “I condemn you” and threw a Bible, hitting a deputy in the face, clickorlando reported.

After that, records show a deputy deployed a Taser on Hoskins so that he could be subdued and handcuffed.

The victim’s wife said about $50 worth of clothing was stolen and noted that there was damage to the door, a mattress had been placed on its side and a window had been broken, leaving shattered glass all over the floor, according to the report.

Moreover, once Hoskins was cuffed, he defecated himself then asked to speak with a deputy. As various deputies came over to speak with him he would stare blankly and not answer questions, authorities said.

A deputy wrote that Hoskins said he broke into his neighbor’s home “because God told me to” and said he “freed her,” referring to the victim’s juvenile daughter.

Hoskins faces charges of burglary to an unoccupied dwelling, petty theft, criminal mischief – property damage, battery on an officer and resisting an officer without violence.