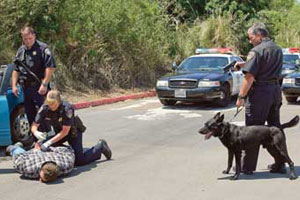 Incident 1: Two officers from a Midwest agency respond to a call of suspected drug dealing from a vehicle. Upon arrival, they observe a vehicle matching the description they received. An odor of marijuana pours from the vehicle as the driver rolls down his window. During the pat-down frisk, the driver takes off, but one officer catches him after a few feet. Snow and ice cause both to fall. The suspect lands on the officer’s chest, pulls the officer’s Smith & Wesson semi-automatic from his holster and points it at him. The officer manages to grab the pistol and twist it back toward the suspect as the suspect pulls the trigger.

Incident 2: An officer working an authorized off-duty security detail in uniform at a housing project in a Western state stops a suspicious vehicle. After calling for backup, he decides to remove the driver and conduct a pat-down frisk. During the frisk, the suspect decides to rabbit. The officer radios out the foot pursuit and gives chase. However, when caught, the suspect begins a series of punches which temporarily stun the officer. When the suspect grabs at the officer’s Glock, the officer isn’t able to secure it in his holster. Looking down the barrel of his own gun, the officer twists the barrel away from his face an instant before the hammer falls.

Incident 3: Two officers from the South investigating suspicious activity in a housing project are conducting a field investigation on two suspects. When one begins to leave, he’s detained and starts to resist. The struggle goes to the ground. More officers are called to assist. Empty-handed control techniques and pepper spray fail to control the suspect. Suddenly, an officer who finds himself on the ground with the suspect feels his semi-automatic being removed from his holster. Due to his physical position, a firearms defense by his backup officers is out of the question. Two TASER hits do the trick, though, and the officers take the suspect into custody.

The Numbers
All three incidents are real. Although from different locales, each occurred during what some might call routine arrests or contacts. They were anything but. In each case, the officers survived, physically. Emotionally, I’m not sure. Legally, we’ll have to wait and see. As the force expert in each case, I’ve decided to leave out the names and agencies of the officers involved, and not mention the city or the state. All are recent events and none of the three civil suits filed by the plaintiffs have yet gone to trial.

Statistics compiled from the FBI, the National Law Enforcement Officers Memorial Fund and other sources show that officer murders from weapon disarmings have been declining steadily. In the 1980s and early 1990s, the annual figure was about 20 percent. That improved to about 10 percent as we entered the 21st century and appears to be going down even further. The latest figures hover around 5 or 6 percent. That’s great news.

But just because the numbers have gone down doesn’t mean the risks no longer exist. It just means the bad guys aren’t as successful as they were. The reasons? Three I can think of: better holsters, better training and greater awareness of the dangers.

You’d be hard pressed to find any agency that doesn’t issue security design holsters nowadays. In my humble opinion, this is the biggest reason for the decline in police murders from disarming. My unscientific poll also shows those officers who have to buy their weapons and leather gear are going for Level 2 and Level 3 holsters.

Weapon retention training appears to have improved, too. Although definitely not what it should be, weapon-retention techniques, for the most part, have become a component of many defensive tactics programs. And that’s good. It’s not just DT, baton and OC refreshers any more. Quite a few agencies even make it a critical component of firearms re-certifications.

Disarming Awareness
Threat awareness? Well, that’s where I and other non-agency trainers/consultants come in. One benefit of retirement is that I can weigh in and get real vocal on a lot of issues department trainers can’t. I’m not controlled by the bean-counters or agency brass anymore. I have the benefit of a lot of research time and case files on actual disarmings at my disposal. And while it appears the number of murders from disarmings have indeed gone down, anecdotal evidence suggests the number of attempts don’t appear to have moved much at all. Why?

An honest critique of the why must include officer complacency. In two of the incidents above, loss of suspect control started during the pat-downs. In the Midwest incident, two cops were dealing with two suspects. This led to a total breakdown of contact and cover tactics.

No one can predict with any certainty the driver wouldn’t have bolted if he and his associate were dealt with separately. However, with one officer frisking while the other serves as cover officer, there s no doubt contact/cover works.

In the second incident out West, the officer opted for a solo stop and suspect removal even though he called for backup. Whether he felt uncomfortable calling for an on-duty unit to back him up while working an OT detail, I don’t know. But there’s strength in numbers. Statistics support this.

Time and space don t permit a full discussion of training, but I can tell you the officers involved in all three incidents were well trained. And, except for the mental lapse in opting for one-on-one contacts, they were justified in using the level of force they used.

Regardless of how you critique tactics, one thing is certain: When a suspect grabs for your gun, he’s already demonstrated his intent. A plaintiff’s attorney may try to convince a jury the suspect only wanted to see what a Glock 17 or a Smith 5943 looked like, but suspects who either try or actually do remove your gun from your holster are in the process of using deadly force against you. Make the appropriate response.

The outcomes in all three of the above cases, at least from a physical standpoint, feature three living cops. The civil cases are still pending, but I’m optimistic all will prevail in that venue as well.

Never allow complacency or fear of litigation, however, to overrule proper tactics when it comes to weapon security. Remember, there’s always one gun at every contact: yours.