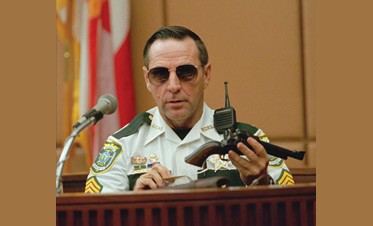 Again, a recent incident prompted this month s Tactics column. Over the past few months, I ve been working with a couple of attorneys who are defending two officers, each from a different police agency, who face a federal civil-rights suit for excessive force from one incident. In my opinion, there s no basis for the suit. Clearly, the force was not only appropriate and reasonable, it was indeed the minimum amount necessary to take the suspect into custody. Furthermore, the officers were outnumbered and the minor injury sustained by the offender was documented as being from an incident that occurred years earlier and which the officers could never have known about.

However, the case may face a more uphill battle than it had to due to one officer s testimony during his deposition. The officer fell for one of the oldest attorney tricks in the book: not listening to the entire question and/or not clearly understanding it before answering.

If you re ever sued, most likely you will be required to give a deposition before trial or what may be called an examination before trial. The rules during depositions are a little different than those at trial. Put simply, you must answer just about every question asked of you, regardless of how probing, embarrassing or insignificant it may seem. For the most part, your attorney can object only to the form of the question; you must answer it unless it relates to privileged attorney/client information.

As a trainer and consultant, I m called upon frequently to testify as an expert witness in defense of cops, so I spend a lot of time in deposition. Over time, I ve learned a few things about testimony both at trial and in deposition.

Depositions are really fishing expeditions. They give the plaintiff s attorney a chance to dig for additional information that may not be readily available from the Incident/Offense Report or your Subject Management (Force) Report, or get you to say something you ordinarily wouldn t. They can and often will dig very deep into your professional background, formal education, police training, work history and even your personal life, not to mention what you were doing hours (or even days) before the incident that brought you to the scene in question. There s not much you can do to prepare for this sequence of questions other than anticipate it and answer the questions as honestly as you can. A lot of cops incorrectly think that just because depositions are not held in a courtroom before a judge, they re not important. Not true. While informal, they are very important.

Many times, the attorney will open with a complimentary statement about your extensive training, qualifications, education or sterling work career in an attempt to get you to drop your guard. Don t fall for it. He has no reason to compliment you. Remain on guard. There s a reason for each and every question.

In some ways depositions are more critical than the actual trial. Plaintiff s counsel will try to lock you into your version of the facts via transcript and under oath well before you get to trial. But unlike the information about work history, education and the like, there s a lot you can do prior to walking into a deposition to head off any problems as far as inconsistencies from these questions go. For example, read over the Incident/Offense Report and any Internal Affairs file that may exist. Same thing with any statements you gave to anyone. Review any available photographs or diagrams. Take time to meet with your attorney before hand, and don t be afraid to say you did. Contrary to popular belief, there s nothing wrong, illegal or unethical about meeting with your attorney before you testify in deposition or trial.

This is also the time the plaintiff s counsel will evaluate what kind of witness you will be when (and if) you get in front of a jury. By virtue of almost non-stop cross-examination, the plaintiff s attorney will try to discover any weaknesses that you have. Do you have a tendency to become argumentative? Are you quick to anger? What s your demeanor? Do you have any quirks that might cause a jury to question your truthfulness? Do you sweat profusely?

Finally, it gives them a chance to refine their game plan for trial. If you come across during the deposition as a strong, believable and credible witness, they ll probably get you on and off the witness stand as quickly as possible. On the other hand, if your weaknesses outweigh your strengths as a witness, expect to be in the box a long time.

Just like at deposition, there are strategies you can use at trial, too. Besides the usual admonition to always tell the truth, you may want to get some insight on the style of the opposing counsel in the rare event they chose not to depose you. Are they a rapid-fire examiner, or more the laid-back, Matlock type? Remember, to the trial lawyer, the courtroom is a theater, and each player has a role. Your role is to present your version of the facts in such a way that the jury will see that your conduct and actions were not only reasonable, they were clearly necessary and proper. Opposing counsel s role is to stir up uncertainty, confusion and contradictions, and breed doubt in the jurors minds. One lawyer once told me, Truth and justice have about as much in common as a warm puppy and a hot dog. The words are similar but they don t mean the same thing at all. A little cynical? Maybe.

Remember: Listen carefully and fully to every question. Answer it completely, but never volunteer anything. It will be your attorney s job during redirect to clear up anything that might have been left unsaid during cross examination.

A lot of cops change their style during direct and cross examinations. They re very relaxed and super cool during direct examinations, sometimes coming off as too rehearsed. But during cross, they tense up, start to sweat, fold their arms across their chest, slouch down and appear defensive. Avoid that trap. If you re a veteran officer, you ve probably already mastered the technique of staying calm, professional and together during testimony, but rookies will often fall victim to that style-change issue.

In our culture, eye contact is a very important part of communication. If your response to a question will involve anything more than a simple yes or no answer, look at the jury when you give it. And not just at one juror s face, but scan the whole jury.

Use qualifiers when appropriate, such as To the best of my recollection or As best I recall. And never say always or never when giving an answer.

Finally, dress conservatively. Ask your attorney about wearing your uniform at trial. Some will want you in uniform. My opinion: I think it s a detriment, especially in an excessive-force lawsuit. But I recognize that there are different schools of thought on this issue.

I was testifying as an expert in a case in U.S. District Court in San Francisco for an Oakland, Calif., officer on a shooting case. This cop was a big guy and in great shape. In his dark blue uniform he looked 6'7", 325 lbs. In other words, Robocop was in the house. When I met him months earlier during a site inspection to the scene, I noticed he had a mustache, and like a lot of cops who have a receding hairline, he was sporting a shaved head, too. He could ve passed for the pro wrestler, Bam Bam Bigelow.

After checking with the officer s attorney, I suggested the cop grow his hair back regardless of how little he had, and lose the mustache for trial. I also asked the officer if his agency required that he wear his uniform to court. When I learned that they didn t have such a regulation, I suggested he wear a business suit to trial to try and minimize his size. On the day I testified, he sat in the courtroom looking like every mother s son instead of The Man. Precisely the image we wanted to present. It worked, too. After less than two hours, the jury found no cause.

OK, let s recap. Review all the reports before you testify. Stay calm and cool during both direct and cross. Don t volunteer answers. Meet with your attorney before hand. Dress conservatively. Listen to every question fully before you answer, and if you don t understand it, tell the attorney to repeat it or clarify it. Don t be rushed. And always tell the truth.

Until next time, stay safe.