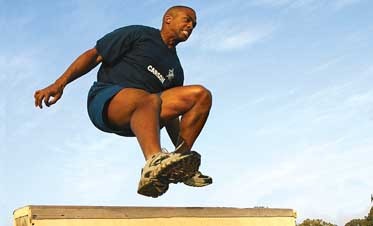 Few cops like to hear about physical fitness, conditioning or nutrition. It’s probably the most taboo topic when we talk about officer-survival tactics. How about when it’s tied to liability, though? Most ears probably will perk up.

Many studies reveal that fit cops are not only more productive, but use force less often, live a lot longer and are more likely to survive a high-risk (or deadly) encounter. The horrendous FBI firefight in April 1986 is proof of that. FBI Special Agent Gordon McNeil went on the record shortly after that incident and reported that according to his doctors, he probably wouldn’t have survived the penetrating neck injury he received without the tremendous build-up of muscle mass he had developed from power lifting.

Young & Alive
Tactical wellness is really a catch-all term coined by my old teaching buddy, Jerry Konrad. Konrad is a retired sergeant from the Rochester (N.Y.) Police Department and, in addition to being my Calibre Press Inc. Street Survival Seminar co-instructor for a few years, was also the physical fitness unit commander for his agency. Tactical wellness encompasses the full gamut of physical conditioning, including strength training, cardiovascular, as well as diet and nutrition the whole package, as Jerry likes to say.

In fact, the FBI believes physical fitness is such an important part of an officer’s lifestyle regimen that its National Academy at Quantico, Va., has made CJ 340, Fitness in Law Enforcement, the only required course for all police students attending. As an FBI-NA grad myself, I can tell you it was a fantastic program, so much so that I also signed up for the optional 12-week Physical Fitness Challenge curriculum.

A recent study from Columbia Medical School showed that when you don’t exercise, your muscles release substances that tell your cells to decay. Conversely, when you do work out, your body secretes chemicals that tell it to grow new cells. Dr. Henry Lodge in his text Younger Next Year reports that we replace about one percent of our cells every day. Most living cells only survive for a few weeks or months, then die and are replaced. Put another way, you’ll get a whole new body every 90 days new legs, new arms and new muscles. So, whether that new body is younger or older is up to you. Work out and you’ll look younger. More importantly, barring any onset of a disease, you’ll be healthier and probably live longer, too.

Fitness & Food
The first thing to consider: What kind of fitness program is better for police officers? One that focuses on cardiovascular activity (aerobic) or strength (anaerobic)? The answer is both. The objective is not to look like Arnold Schwarzenegger in his prime, so muscle-bound you have no flexibility. And you certainly don t want to give the appearance you re an advance man for a famine either. The objective is to maintain a proper balance of both strength (adequate muscle tone) and cardio (endurance).

I knew one cop who could bench press a Buick, but after a foot chase of a junkie perp one night, I found him sucking oxygen from the trunk of his squad. Also, most skells aren’t going to take you on a 15- or 20-mile marathon in their haste to avoid jail, so a balance is best.

The next item: diet. (I can almost hear the pages turning. Just bear with me for a few minutes.) It all boils down to common sense. Your job often requires you to eat on the run. Very often we can t control our work-time food as much as we can our meals at home. So, lets just keep it simple. Trans fat: bad. Donuts: bad. Fried foods: bad. Junk food: bad. High-fiber: good. Low fat: good. Broiled: good. Fresh fruit and veggies: good.

Legal Reasoning
Earlier, I mentioned liability. Let’s talk about that. There is plenty of legal precedent for cops being and staying fit. One U.S. Court of Appeals case, decided in 1988 (Parker v. the District of Columbia1), involved the Washington (D.C.) Metropolitan Police Department (MPD). In the Parker case, some of the court s language proved very revealing. Given [District of Columbia] Officer Hayes physical condition, it is not hard to fathom that his most effective method for subduing the objects of his pursuits would be the use of a firearm as opposed to the application of physical force.

The details of the case centered on Hayes inability to extract the suspect (Donald Parker) from a vehicle. Testimony from an earlier trial revealed Hayes had been cited several times for being overweight and not in adequate shape to perform his job. The court noted this condition posed a foreseeable risk of harm to others. The Appeals Court affirmed the lower court s award of $500,000 to Parker and ruled the MPD was deliberately indifferent with respect to the physical training of its officers.

If the obvious medical and health benefits for getting and staying in shape don t motivate you to start eating right and working out, the legal implications should.

Until next time, stay safe.