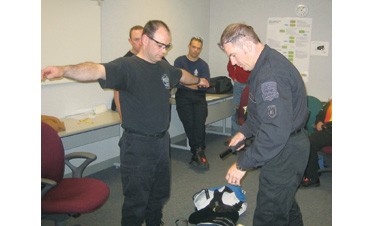 As a veteran officer approaching a traffic violator, would you notice a gun lying in plain sight on the dashboard of a vehicle you’ve detained for running a stop sign?

Before too quickly thinking “of course,” consider the findings of a new study of the phenomenon known as “inattentional blindness.” That term refers to the common human failure to notice unexpected objects or occurrences clearly within your field of view while your attention is focused on something else.

This cognitive lapse, which is studied in the certification course on Force Science Analysis in the context of officer-involved shootings, has been thoroughly documented in low-stress psychology lab experiments involving computer images and video recordings.

Now one of the leading researchers in this field, Dr. Daniel Simons of the psychology department at the University of Illinois, reports fresh findings that apply directly to LEOs in potentially life-threatening, real-world situations.

His results raise a vital question: What can officers and trainers do to enhance observational skills when police lives may be on the line?

Test Scenario
Over a period of three years, Simons and his study co-author, Dr. Michael Schlosser, ran 100 police recruits and 75 seasoned officers (mostly white males) through a single, realistic, live-action scenario at the Police Training Institute in Urbana-Champaign, IL. (Schlosser is the director of that state academy.)

One at a time, the participants were told to approach an SUV they had just “stopped” for running a stop sign and to interact as they would on the job with the lone occupant, the male driver. They were to “use their discretion to decide” whether to issue a ticket or give a warning, Simons writes.

In some randomly determined cases, the driver, an experienced role-player, was “polite and friendly,” admitting fault, apologizing, and “immediately and appropriately” complying with all requests and instructions. A roughly equal number of other times, the driver was still compliant but displayed an “aggressive” attitude—“verbally hostile, agitated, and overtly upset,” complaining about “unfair treatment” and being stopped “to fulfill a quota.”

In all cases, an Airsoft pistol was conspicuously positioned on the dashboard above the glove box, “fully visible to [each] participant through the driver’s window” throughout the contact.

After experiencing the scenario, the subjects were asked a series of questions, including whether they noticed “anything that might have been a danger to you” and whether they saw “any weapons” during the exercise.

Striking Results
“Overall,” Simons writes, “only 52.6% of participants noticed the gun even though it was fully visible.”

• Of the recruits, who had received four to eight hours of hands on training in vehicle-stop tactics, only 42% saw the gun.

• While “experienced officers were substantially more likely to notice” the weapon (66.7%), “1/3 of them missed the gun as well…and proceeded to cite the driver” without taking any protective action.

• Among the veteran officers, who averaged about 12 years in law enforcement, “neither patrol experience nor age was meaningfully associated with noticing.”

• “A slightly larger proportion of both trainees and experienced officers noticed the gun” when the driver was calm and compliant than when he was aggressive, but the difference was “not statistically significant.”

• When participants did notice the gun, “they always called attention to it and took appropriate measures (ranging from discussing it with the driver to drawing their own weapon and instructing the driver to exit the vehicle.)” Among experienced officers, many of those who noticed the gun did so “early in the interaction, often before asking for the driver’s license and registration.”

In summary, Simons writes, this study, believed to be the first of its kind, “provides clear evidence that experts performing a naturalistic task in their domain of expertise can miss a potentially dangerous unexpected object that would have direct consequences for them and the way they perform their task.

“Moreover, this failure of awareness occurred for a group of participants (police officers) trained to look for and assess threats.”

The fact that the driver’s demeanor had little impact on whether the gun was noticed tends to dispute “the idea that people will be more likely to notice threatening unexpected objects in contexts that are more stressful or potentially more dangerous,” Simons points out.

Common Occurrence
Most participants who missed the gun expressed surprise or chagrin at their failure. But Simons explains that “people often fail to notice unexpected objects and events when they are focusing attention on something else.”

Typically, this “inattentional blindness” is confirmed in laboratory experiments in which the unnoticed objects are unimportant to the person being tested and unrelated to that person’s primary task

But in this case, the subjects involved have training that emphasizes “vigilance for possible dangers and threats” in their environment, and the presence of a gun on a real vehicle stop “would have direct and immediate consequences for the officer(s). It is [highly] relevant to their

Logically, “the potential threat should override inattentional blindness.” Indeed, the subjects “expected that they would automatically notice something salient and relevant.” But as the data shows, that proved to be far from a universal

“Given that the participants came from a wide range of jurisdictions,…we would expect the pattern of results to hold for trainees and experienced officers from most jurisdictions in the USA,” Simons concludes.

1) Actively dispel the misconception that all relevant and important objects and behaviors in view at a given scene will automatically be observed, and

2) Highlight how the nature of an interaction, whether cordial or hostile, “does not strongly predict whether or not an officer will notice an unexpected threat.”

Dr. Bill Lewinski, executive director of the Force Science Institute, which was not involved in Simons’ research, adds these comments:

“Dr. Simons is without question the master researcher in the field of inattentional blindness. His confirmation of this phenomenon in law enforcement is very significant for investigators and for countering police critics who claim that officers are simply lying when they insist they did not see some important elements of a controversial incident.”

As to how to avoid or minimize the risk of inattentional blindness during citizen contacts, Lewinski offers these suggestions:

• When possible, carefully scan the area you’re approaching before you engage in dialog or action in the encounter. “Once you’re tied up in dialog, it’s very difficult to simultaneously be aware of items or furtive movement in the surrounding environment,” he explains. (This is consistent with Simons’ finding that veteran officers who spotted the gun on the dashboard usually did so early in their approach.)

• Train your professional skills to the point that they tend to be automatic, not requiring conscious concentration. “If you have to think about how to perform the routine elements of what you’re doing, you have fewer cognitive resources to apply to awareness and assessment,” Lewinski says. (Simons alludes to this in his study, speculating that the relatively inexperienced and poor-scoring recruits may have been so focused on the mechanics of conducting a proper traffic stoop that their observational skills were unduly compromised.)

Lewinski points out that the Force Science Institute is currently researching how instructors can more quickly and effectively build automaticity in officers to enhance their safety on the street in the time typically allotted to training.

Simons’ study, titled “Inattentional blindness for a gun during a simulated police vehicle stop,” appears in the publication Cognitive Research: Principles and Implications.

Dr. Simons can be reached at: [email protected] He is co-author of an excellent book, The Invisible Gorilla: How Our Intuitions Deceive Us, which includes discussions of inattentional blindness relevant to law enforcement.

Law Officer is a proud partner with the Force Science Institute.  This article originally appeared in Newsletter 348.

Visit www.forcescience.org to learn more about the research FSI conducts and the training they provide.

The Force Science Institute is comprised of a world-class team of physicians, psychologists, behavioral scientists, attorneys and other leading professionals. We are dedicated to the unbiased application and further study of 150 years of existing scientific research on a wide range of areas associated with human factors, including the intricacies of human movement, action/reaction times, how the mind works during rapidly unfolding events, decision-making under stress, etc. Research specialists design our intricate research protocols and our work has been repeatedly published in leading peer-reviewed journals. Our goal is to provide information on human behaviors during high-stress, rapidly unfolding encounters to those who are tasked with evaluating and investigating the behavior of individuals involved in these events. It is our hope that we can support their efforts to ensure that these evaluations are thoroughly informed, fair and fact-finding.