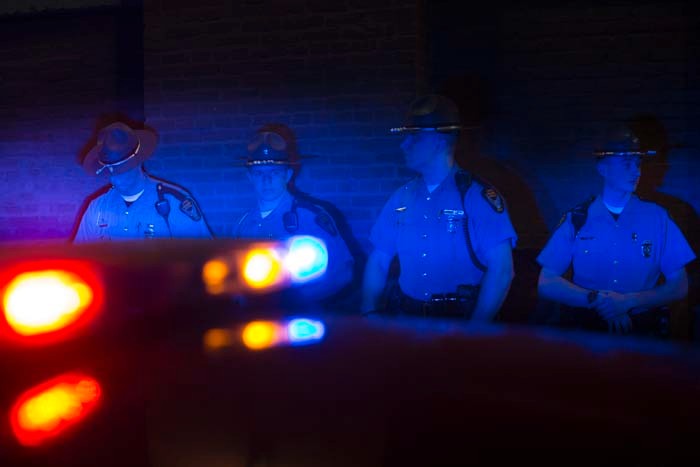 High-level threats require an immediate response and officers move fast to get to the call. But how fast is too fast? Not all dangers are known or obvious to first responding officers. High-level risk should trigger a cautious response but many a low-priority call has escalated into violence. We can increase our safety and effectiveness by taking a moment to measure and calculate what we are facing, and what steps and tactics should be employed.

After attending a BowMac (BowMac.com) incident management training program a few years back, I was left with this thought: As a first responding patrol officer, what do you do as the first order of business in a critical event? Additionally, as a follow-on officer or supervisor, what steps offer the best opportunity to effectively manage our actions and the event?

The following is a list of seven tasks to help both the first officer on scene and those coming to assist bring order to the chaos. It requires deliberation, and that can be a rare commodity when the adrenaline is spiking. You make the choice as to the order of necessity and certainly there are more elements that can be added. This is a stripped down list that covers the essentials; gain the best information, determine the kill zone and do not rush head-first into high-level violence and danger.

When we take the time to consider our options and make use of these concepts, the more likely we will come to a better ending than if we had simply choosen the “full speed ahead, everyone do as you will” option. In this model, there is something for all responders to consider. The first officer may not be able to work on perimeter issues, but someone can. The priority must be to prevent arriving officers from unknowingly entering the kill zone. To prevent this and warn them, you need to get out on the radio and secure communications, followed by the other command and control issues. The first officer(s) need to determine if backup is near and coming to a location that will be of immediate assistance. Can you gain an advantage by observing the offender’s actions from a distance before making contact? Taking into account what you see and what was reported, what is the observable danger and can you use that information to choose the best time and place to make contact or arrest?

Speed is a double-edged sword. By moving fast, you may put a fast end to the incident but unthinking speed based on an adrenaline rush is dangerous. Even incidents that involve the highest level of threat may well afford officers time to assess, plan and consider, if you choose to do so. “Fools rush in where angels fear to tread” is a perfect line to demonstrate the vital issue that speed kills. This can mean the speed of arrival and response along with how fast we move into action.

Too often I have seen what I call “reckless arrival:” patrol car after patrol car driving at warp speed, often in convoy to get to the problem. It can also look like this: officers on foot running into a building or down an ally. I have done it, and plead guilty. Where I learned a needed lesson was years ago during several visits to the Los Angeles Police Department. As my partners and I went on ride-alongs, we saw traffic stops and police actions where the officers took their time and worked as a team. No one rushed forward. The LAPD officers demonstrated calm and precise actions. One officer called commands while other officers provided firearms cover and others formed arrest teams. Their contact and cover tactics are the basis of what we train today.

Regardless of your department’s size, you do not need large numbers of officers to do the job safely and effectively. Sure it is good to have big numbers and fast backup but that is not the reality for most officers. Understanding your own capability and realistically assessing the threat level before you rush in is the key. The starting point is you. Your actions every day are determined in part by how fast you think, act, react and move. Effective response is not a product of chance but of design and continued training. You get back what you put in. Just because nothing bad has happened yet does not mean you have responded correctly. Luck cannot be a strategy.

A rule to consider is that little good happens when we rush in. Running up and surrounding a vehicle that has crashed after a pursuit fits this description. As does running into the immediate area of a suspect with a gun or knife without attempting to determine location and description. There may be times we have to do so, but it should be the rare exception. Events need to be put in context as there surely are some positive things that can happen fast. We train our officers in active threat classes to move fast to the threat based either on information or the sound of gunfire from an active shooter, but that does not mean that we do so recklessly.

Where force is required to stop criminal violence, the application of force needs to be considered as to what risk we should take and for what reasons. Forcing entry against an armed hostage taker bent on murder may be the only option, but why force entry against a barricaded gunman who is alone? If we attempt to “brute force” every situation, there will be a time where we will go up against those who do not care about their safety or life and will seek to harm everyone around them, including the police. We will ultimately prevail, but at what cost? The law enforcement goal is stopping dangerous offenders by seizing them and making arrests and we can do that best by measured and calculated actions.

We need to first consider our tactics and procedures before we approach or are confronted by dangers. We will not succeed in the long run by being totally reactive to events and offenders, yet we are at great risk when rushing into the unknown. We need to create a tactical buffer, a better protective zone, wherever and whenever we can.

Prior planning and rehearsal for responding to dangerous or critical events and the use of a simple checklist such as the BowMac model offer a significant advantage to all police officers under the stress of the moment. Carry a card in your shirt pocket with the seven listed points and practice the “what ifs” when things are not going sideways.

Today, police officers are under the most intense scrutiny after events by both their department, their communities and, in some cases, by the entire nation. It is the nature of the job and it is the reality. We cannot guarantee good endings, only solid process and procedure. We cannot prevent criminals or terrorists from choosing to do bad acts. We do not control the events around us, only our response to them. If we take to heart this message, we will train hard for those dangerous times and places. We will move forward with deliberation and with a higher level of confidence based on the recognition that we will not be part of the video showing a high speed, uncontrolled approach to danger.

Share and speak up for justice, law & order...
Tags: AcademyFeatureFeaturesTrainingTraining