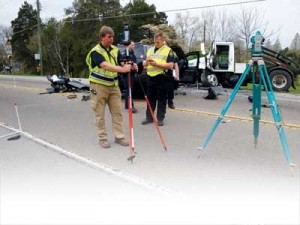 Too often, law enforcement agencies purchase advanced equipment but provide for minimal or no training on it. As a result, the equipment is used minimally or hardly at all. After a while, even a tool's most basic functions become lost for the user. This problem certainly applies to the important aspect of crime and crash investigation.

Fortunately, many crash and crime scene reconstructionists have also become expert trainers and are strong believers in continuing education for less experienced investigators who must learn the basics of mapping and diagramming scenes. Crash investigation training in particular is not only crucial, but must be continually applied if those trained are to become proficient and the best they can be.

Changes in technology for crash investigation work are one of the driving challenges that prompt law enforcement agencies to send investigators to training classes. One of the biggest issues is that students taking these classes work for agencies that use a wide and varied range of technology tools—from tape measures to total stations to laser scanners. "It's tough to teach a computer-aided design (CAD) crash drawing program, total stations and data collection all in a 40-hour week," says Mike Selves, crash investigation trainer and owner of Collision Forensic Solutions in Omaha, Neb. "That's why I've always tailored my training to be a two-week class—one week is a 40-hour course in CAD drawing and the second week is on how to use a total station with evidence recording software."

Law enforcement officers usually get some degree of instruction on crash investigations when attending the police academy. But it's not nearly adequate for tackling complex crash scenes requiring detailed diagrams, especially if these diagrams may be needed for court presentation.

Effective Courtroom Presentation Is the Goal

A longer crash investigation course aloows for an essential ingredient: more hands-on training with mapping and diagramming crash scenes. But another critical goal is to prepare students to present and defend their crash diagrams in a courtroom. Just becoming familiar with software functionality is not enough, Selves argues. Students must learn to accurately map a scene by actually going out and measuring a mock scene as part of the class, unless a real one suddenly becomes available. "This is why we stress the two-week training course, because they need to make sure they get everything [all scene evidence] through court," Selves says. "They need to make sure there is a chronological order of how the measurements were obtained and what they did with them once they processed the data."

In 2013, Det. Sgt. Pete Thompson with the Kings County (Calif.) Sheriff's Office acquired a Leica Total Station and the MapScenes Forensic CAD 2013 crash and crime scene diagramming software. He took a two-week training class from Joel Salinas, a trained California traffic crash reconstructionist. In December 2013, he needed to map and diagram a crime scene involving a shooting, in which a person was fatally shot while sitting in a car. There were bullet holes in the car's doors and windows.

Using MapScenes Forensic CAD, Thompson was able to insert trajectory rods (representing the bullets) in the holes and make the drawing in 3D. "You could bring all of this up on the computer, print it out and view it in the courtroom," he says. "This all would show specific evidence, because people lie, but the evidence doesn't." Thompson learned how to use Forensic CAD to establish any measurement and the distances between evidence items on the drawing. He was able to show different layers on his diagram—of a particular roadway, vehicle or body; document crime scene evidence as a separate layer and provide labels for evidence items.

Along with these capabilities comes big time savings. When Thompson and other investigators measured a scene in early 2013 where a large fight had occurred and several shots were fired; it took several hours to map the scene using a Rolatape measuring wheel. If the Total Station had been available, the scene could have been measured in 20–30 minutes.

In the training class that Thompson took, students spent several days creating mock crime scenes. But a real crime scene also became available, involving a homicide in an orchard where a body had been dumped. "We were able to use this scene for measuring and documenting," Thompson says. "Now, everybody on my team has the capability to use the total station and mapping software as a result of the training class."

Can students actually learn enough in just one two-week course to become proficient at crash reconstruction? According to Salinas, the California crash reconstruction trainer, this really depends on the skill of the student and how much they use the equipment. "If you're out using the equipment a couple times a month, you're going to take what we taught you and build on that," he says. "If you put the equipment down and you don't build on your skills, you may need a refresher course."

Salinas tailors his classes to each agency who sends students to training. "If a training coordinator at a law enforcement agency wants to focus on crash (vs. crime scene mapping only), my class will be tailored to crash reconstruction only," Salinas says. "I advise classes to think about the specific things they'll be doing." For example, the topography of an area in which crash reconstruction will be done is an important aspect, since there can be high elevation or drainage ditches.

The Amarillo (Texas) Police Department began using crash mapping software after it formed a crash investigation team and had spoken to a user of the same software, Senior Trooper Christopher Ray, with the Texas Highway Patrol. Ray had been using the software with a total station. The Amarillo PD and Ray teamed up to take a training class from Selves. The class showed these investigators not only how to create more detailed and accurate 2D crash scene diagrams, but also how to ensure the drawings withstand court scrutiny.

Software Can Build a Diagram with Scant Details

Ray found that the software enabled him to create an informative drawing with scant scene details. For example, he explains, "We can go back to the crash scene and create a drawing from just two skid marks." The drawing, filled in with a few more details, becomes a persuasive evidentiary tool. "Once we go to court, we can project the drawing for the jury so they can see crash details," Ray says.

Years ago, when crash investigators used, say, a Sokkia SDR33 data collector, they had to know the descriptor codes. Today, the Forensic CAD program and others like it allow the user to create his own codes and will place them on a drawing automatically. An example is EP1 for edge of pavement 1, EP2, etc. "This way, you can automatically connect points that relate to a specific code," Ray says. "You can put a code next to a point and know exactly what that point was. You don't have to memorize the codes."

Continuing education in crash investigation is especially crucial since this is not a full-time job for many investigators. "With mapping a crash scene and then reconstruction, there's extensive processing time when you're done," says Rick McAlister, an accredited crash reconstructionist with The Crash Lab, Inc., in Hampton, (N.H.), which provides consulting and training on crash reconstruction.

Another factor to consider is that crash reconstruction training can differ across states. In Maine, for example, McAlister explains that students must participate in a field training program in which they are required to build and submit a minimum number of crash reconstructions for approval, then pass a test to receive certification for one year. "You have to go out and work wrecks," McAlister emphasizes. "If students barely pass the exam and learn just enough to stay in the program, they never get comfortable with the [crash investigation] work that they're doing. So, at times, they miss things at a scene because they're not collecting all the evidence needed, which results from not working enough wrecks," McAlister added.

Using the latest technology is paramount in continuing education classes for crash reconstruction. The laser scanner is the most comprehensive scene mapping tool available due to its ability to offer high-definition, 3D scanning of any scene. Its value is in showing the complete scene just as it looked once a collision occurred and vehicles came to rest. The scanner measures a large number of points—often in the millions—on the surface of the crash scene, then produces a point cloud as a data file. The point cloud represents the points that the scanner captured.

Like Salinas and McAlister, Selves is firmly committed to the need for proper training, whether an agency has just purchased new crash scene mapping equipment or already has such tools, but still has inadequately trained officers. "We want students in our classes to be confident that when they leave the class, no matter what scene they're on, they can shoot it, move around within it, download it into a data collector and make a drawing from it, and present that in court," Selves says.

Coincidently, on the last day of a two-week class that Selves had been teaching to the Amarillo P.D., a fatal crash occurred at an intersection on a five-lane road where a car had been T-boned by a truck. Selves halted instruction and took students directly to the fresh crash scene. He purposely did not monitor the students as they proceeded to map the crash scene, however. Why? "I had confidence in their abilities," Selves says, "and they mapped the scene perfectly." Students and Selves were at the scene at 9 a.m. and back in the classroom before noon. "They [the students] were very proficient," Selves says.