Social Media Used To Rescue Family Of Officer During The Storm

New York correctional officers prohibited from wearing their own masks

Man charged with aggravated assault after aggressively coughing on officer: ‘Now you have the corona’

Social Media Used To Rescue Family Of Officer During The Storm

Frank LaMonaca, a Customs and Border Protection Officer (CBPO) and K9 handler in the North Eastern United States was worried. He tried calling his father’s cell phone a number of times but there was no answer. So, he decided that instead of calling the police, he would turn to Facebook to seek help in finding him. 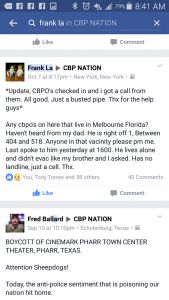 Frank’s 58-year-old father, Francesco, lives in a trailer home right off the water near Satellite Beach in Melbourne, FL., a city that suffered the wrath of Hurricane Matthew as it approached the Eastern Seaboard on Oct. 6, 2016. CBP Nation, a social media group, CBPO LaMonaca posted his concern about his father and received an overwhelming response as part of the efforts to locate and assist family members stranded following the storm.

CBPOs, who were a part of the Disaster Assistant Recovery Team (DART) in Florida, came to the rescue of Francesco within two hours of Frank’s Facebook post.

“I was completely blown away,” Frank said. “Within 10 minutes of my writing the post on Facebook, Miami Seaport Port Director Dylan DeFrancisci called me. I gave them some information on my dad and they were able to track him down.”

Eight CBPOs traveled to Melbourne and found Francesco. His trailer was still intact, although a busted outside pipe caused concern.

“I told my father to evacuate before the storm but he didn’t listen,” Frank said. “I told him to turn off his cell phone so that he could use it only for emergencies, but he didn’t listen to that advice either and the battery died. So, when he called using the cell phone of one of the CBPOs when they arrived, my family and I were so relieved.”

Port Director DeFrancisci said he was proud of the DART for being able to help not only Frank’s father, but many other families in Florida. 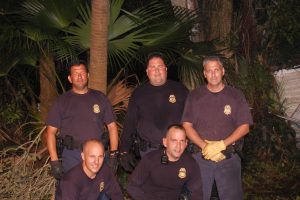 “When I saw Frank’s post wondering about the whereabouts of his father, I knew we would be able to help,” Port Director DeFrancisci said. “I was monitoring CBP Nation so I called him immediately to ask for details.”

CBPO and K9 handler Jennifer Cassell, who is stationed in Calexico, CA., also used social media after her sister, Emily Fox in Hastings, FL., called and said that though her home was unscathed, there was extensive damage to the outside of it. Fox’s back door was inaccessible due to a fallen tree.

“After talking with my sister, I went on CBP Nation to post a message seeking help,” Cassell said. “In just a short period, I received a phone call and relayed my sister’s information. Within minutes, I was told that five officers would be out there in 90 minutes.”

The CBPOs worked to clear the path outside of Fox’s home and she and her family were finally able to use the back door. Later, Port Director DeFrancisci called Cassell to let her know that the job was done and that everyone was OK.

“My sister’s family was absolutely ecstatic,” Cassell said. “It’s reassuring to know that as an organization, CBP really cares about its employees and their families. Port Director DeFrancisci said it best when I was on the phone with him: ‘One team. One fight.’ ”

Jayna Desai is a member of US Customs and Border Protection’s (CBP) Communications Management Office (CMO) where she works corresponds for the Director, Louis Gregory. Formerly a writer for the Associated Press, Jayna now writes for CBP Headquarters.

What Are Your Thoughts?
Tags: border patrolcustomsNewsstorm