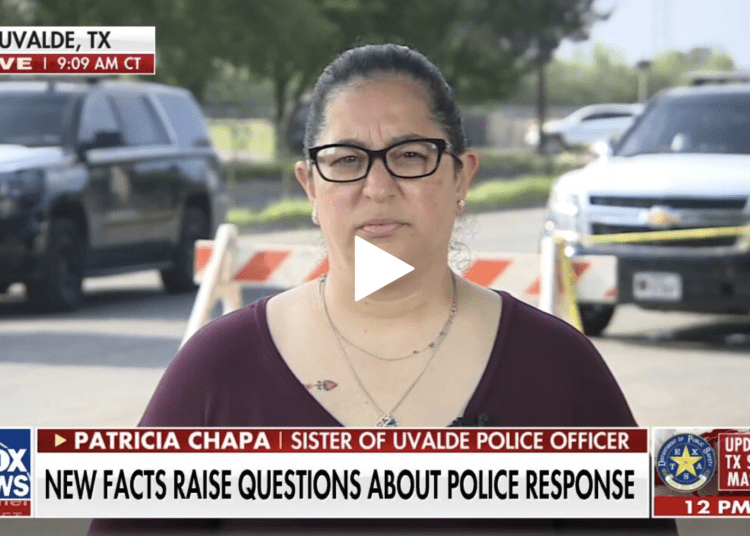 Uvalde, Texas – The sister of a Uvalde police officer said that law enforcement  did not retreat from Robb Elementary School as a gunman attacked a fourth-grade classroom. Her claim comes after police have been flooded with a myriad of questions about their response to the tragedy.

Patricia Chapa, whose sister is a teacher at the school, joined Fox News on Friday to share what she has learned from her siblings about the attack and police response.

“They did not retreat until the shooter was down. They were in there the entire time. People don’t understand, people think nobody was inside during that time. They were inside, they just couldn’t get to the shooter. The shooter would come out and shoot at them. There was no way for them to just go in there and shoot,” said Chapa.

She said her brother was among the first officers to arrive at the scene and was fired at by the gunman, but was not hit.

In the aftermath of the mass school shooting, many narratives have changed along with reports from news agencies that have turned out to be false.

“The police were doing nothing,” Angeli Rose Gomez told the Wall Street Journal. “They were just standing outside the fence. They weren’t going in there or running anywhere.”

Gomez, a parent of two children at Robb Elementary, was arrested after confronting police officers who were outside the school. Many parents urged officers to enter the building to stop the shooter amid the chaos of the scene.

On Thursday, Victor Escalon, Texas Department of Public Safety regional director, updated the community on the developments in the timeline. Escalon revealed the shooter entered Robb Elementary without any confrontation from officers through an unlocked door.

Escalon said that law enforcement continues to investigate the timeline and working on getting answers for parents and the country, particularly over the school’s safety protocol.

Author and Trainer Travis Yates tells us that it will take time to put together all of the events that occurred in such a rapidly evolving situation saying that It can be very difficult for the public to understand why so much of the information seems contradictory or wrong.

“While we have more information today, the public must understand that their decision making was made based on a very limited amount of facts in the most chaotic scene anyone could imagine and I would hope that any judgement that comes to those responding officers would take that into consideration,” Yates said.