Shot Show: Suppressors, Silencers And The Quest For Noise Reduction 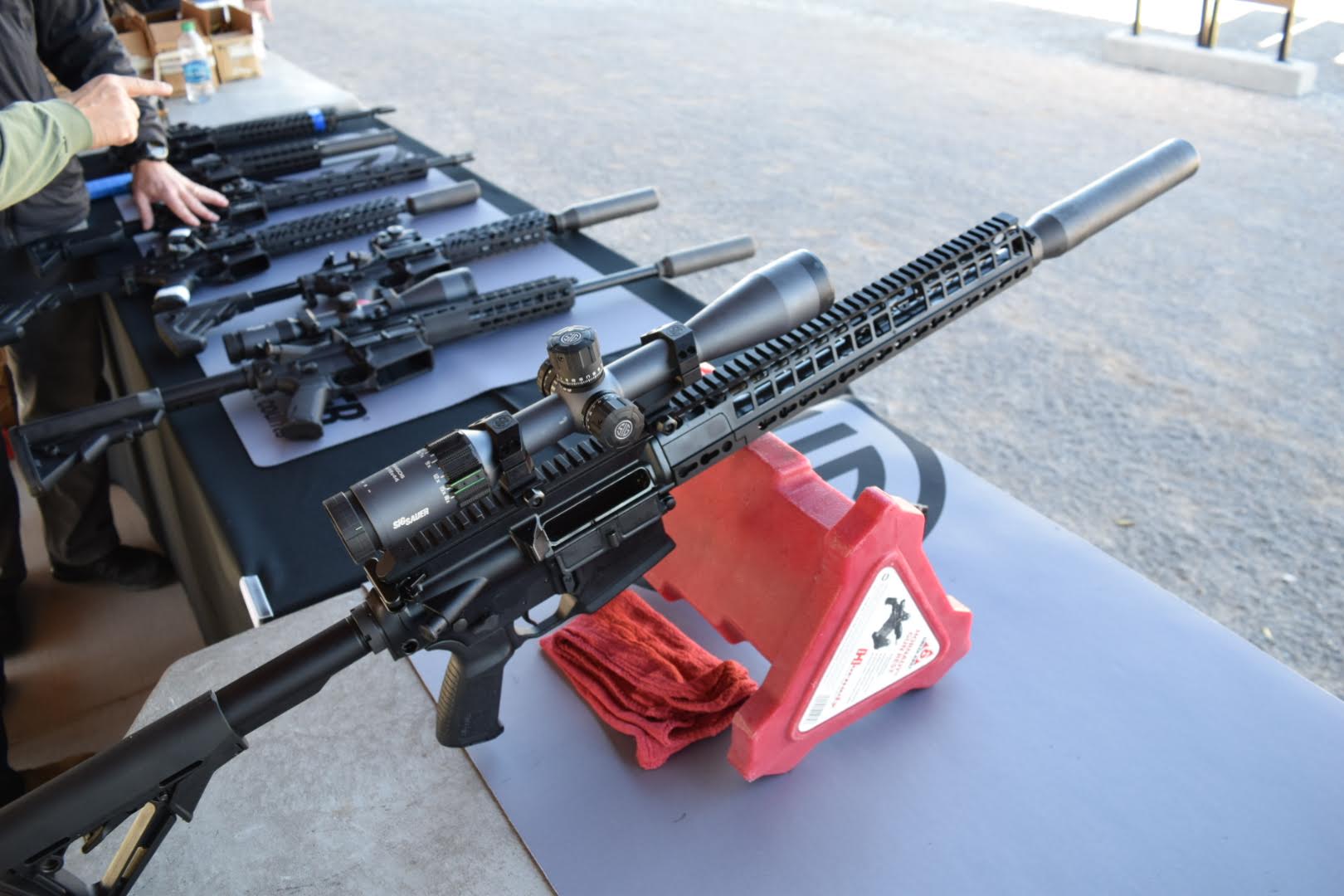 Prior to the opening of the Shot Show, SIG SAUER has an invitation only range event to showcase their products. It is the most professional and complete range day I have attended and if you are fortunate to be invited, you spend the day with the SIG range crew and get a live fire review of all their newest model handguns, carbines, rifles and accessories. The “crew” includes SIG President and CEO Ron Cohen and many of their top management men and women. To say that SIG puts their all into this event does not do it justice.  Driving north out of Las Vegas, my friends and I headed to the Clark County Shooting Complex. The range sits high above the valley and is one of the wonders of the shooting world. Ranges of every type line the base of the mountain. We were greeted by the SIG staff and introduced to their instructor cadre.

Of special interest to me is the SIG line of rifle suppressors or silencers. As a very strong proponent of patrol rifles, I also recognized from day one, that the muzzle blast from our .223 / 5.56 AR type patrol rifles posed a serious noise danger. While also true of our handguns, my focus in this review is on the noise issues related to our long guns.

I, along with most of the officers I have served with, have moderate to severe levels of tinnitus and hearing loss because of the noise level experienced during our year in, year out required firearms training or from being involved in actual street incidents. One of our friends at the federal level did a presentation on a OIS incident where his partner fired an M-4 carbine next to him. As a result, he has lost half his hearing in that ear. As a point of reference, gunfire noise level depending on caliber is greater than 140 decibels. Audiologists warn us that noise that exceeds 140 decibels can cause immediate and permanent hearing damage as happened to the agent. The more often an officer is exposed to such levels without effective hearing protection, the worse it gets. That 140 plus decibel danger level can be reduced by as much as 30 decibels by use of a sound suppressor and that is very significant in terms of hearing protection. The real question is why is this not widely known in our profession, and why are we not doing something about it. There has never been much attention paid to proper hearing protection and too many police officers have paid a non-refundable price. Currently, there is a strong educational and legal effort nationwide to recognize the importance of suppressors, also called silencers, for hearing protection and noise reduction for all shooters. Forty-two states currently allow the use of sound suppressors. Legislation is pending in several of the remaining such as my state of Illinois to allow police officers and citizens who undergo the stringent federal application and background check process to own and use noise suppressors in their shooting activities and on the job. Against common misstatement and mythology, there is no total silencing of a firearm. An effective suppressor reduces but does not totally eliminate all noise and with nearly all service ammunition used in centerfire carbines and rifles, there remains the supersonic crack of the bullet downrange.

The first stop on the range was with SIG instructor and range officer Dennis Carroll. Dennis is one of our own, a retired Illinois police Lt. and ITOA member. A few minutes catching up on news and we were introduced to SIG’s Chief Instructor Scott Reidy. I asked Scott about SIG’s focus on developing their line of suppressors. He walked us to the centerfire rifles with attached suppressors and explained the lineup.  First tested was a SRD 556 mounted on their patrol type – MCX piston 5.56 m/m semi-auto carbine. This is a welded titanium unit that is attached by either a direct thread on or in another version by a quick detachable mount.  The specs are listed below for this very light and compact unit. The optic on the rifle was the SIG Romeo 4T red dot.  My impressions shooting from the standing position were muzzle blast and flash was nearly eliminated and the sound level at the muzzle greatly reduced. This is vital protection for both the shooter and any person in the immediate area such as a partner officer during a search or enforcement action. I had no way to mechanically measure the reduction but compared to the non-suppressed carbine, it was night and day. With the suppressor attached, I could very comfortably shoot with soft plugs for protection as opposed to my usual muffs and plugs combo. For comparison, I then shot the SRD 762 Ti unit that is designed for .30 caliber rounds and included the 300 Blackout, .308 Winchester, and up to .300 Win Mag. This is the titanium version and they also have the non-Ti slightly heavier unit is manufactured from Inconel steel, a special high strength alloy that is described as having exceptional heat and corrosion resistance. The 300 Blackout in the subsonic (less than 1125 fps) loading was extremely quiet. While it is unlikely to push aside the 5.56 m/m in popularity, it has its place where a larger caliber, heavier bullet is desired that uses the same platform and magazine as the 5.56 rifle / carbine.  Next was the SRD 762 suppressor on the model 716 DMR G2 .30 cal. AR type platform using military 7.62×51 m/m (.308 Win.) 147 grain ball ammo. Coupled with SIG’s Whiskey 5 – five power to 25 power variable scope, the furthest steel target available at 200 yards was no contest for this set up. Noted gun writer Patrick Sweeney just completed his Gun Digest Book of Suppressors. During the writing of his book, he told me that his testing shows that a suppressor often increased the accuracy of the rifle and at no time did he experience a decrease in accuracy. I look forward to further testing this rifle and suppressor combo at extended distances with match quality ammo to support Patrick’s findings. Shooting results were similarly to the SRD 556 as to noise and blast reduction. Felt recoil seemed less with all three of the calibers. This is subjective from shooter to shooter but Scott agreed that one of the positive effects of the suppressor is to soften the cycle of the carbine/rifle. Because these are piston rifles, there was very little gas blow back into my face as I have experienced with the direct gas impingement systems. With a suppressed DI AR type carbine, the rearward gas pressure from the use of a suppressor forces gas backwards through the chamber as the cartridge is fired, extracted and ejected. Hot gas pushes back through the upper receiver around the charging handle and also out the ejection port into a cloud around the face of the shooter. It can be minimal or fairly intense, stinging the eyes. My experience is that shooting while active and moving with some wind across your body it is no big issue, but stationary and no wind it can be. Note: protect your eyes.

At the end of shooting I met with John Hollister who is the product manager for the SIG suppressor division. John who has extensive experience with suppressors and he reinforced Scott’s presentation and brought out another suppressor advantage, the ability to communicate with other officers should they face a deadly force event. When gunfire breaks out, the intense noise can prevent vital communications. On the street, range, or wherever you are working with firearms, “Command and Control”  is the bottom line  he said. To be in command or to follow orders, you have to be able to hear.

Final thoughts on the day:

If I could make it happen, every police service rifle would be fitted with a sound suppressor to be used as needed. We train hard on matters of officer safety and the ability to maintain our hearing has to be a foundation issue. Be assured, it will be for you when you can’t stop the ringing in your ears or hear the conversation around you.

All who are part of the shooting sports or use firearms in their profession should lawfully have access to this needed protection. It is relatively expensive to obtain a suppressor, close to a thousand dollars; but there is no price on having functional hearing. Those who have lost hearing would pay any amount to get it back. For a small fraction of “any amount”, you can prevent the problem.

While the number of individual suppressor units tested and rounds fired was limited, the SIG firearm suppressors appear to be very well made, effective in operation, and backed by a company known for quality and service.

If you are looking into acquiring suppressors, get hold of John at SIG and be prepared to go to school.

It was an educational day on the range with SIG and it was a privilege to be in the company of so many fine police officers, military members, and citizen shooters.

If your agency does not make use of suppressors, get your Chief or Sheriff to the range.

If your state does not allow the possession and use of suppressors, look to change the law by educating those in the legislature and your Governor. Get them to the range. The proof is in the shooting and self-evident.

Standby for further there is still much to cover as to SIG optics and their handgun line up.