Officer assaults are on the rise 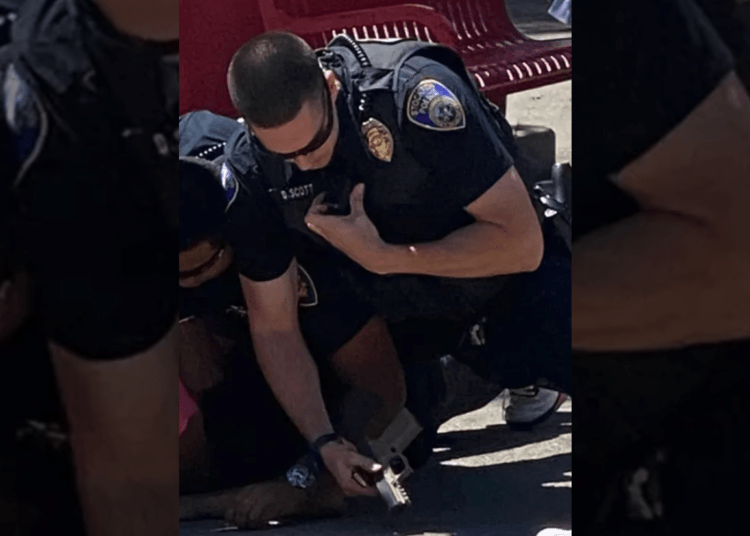 A school resource officer disarms a student during a fight. (Stockton Police Department)

We know how many officers are killed in the line of duty but we don’t really know how many are assaulted and wounded in other ways. The image of police officers being wounded and assaulted is that they are dodging bullets, knives, and fists. That is still true, but recent headlines show that cop haters are limitless in their methods of harassing and hurting police officers.

In Philadelphia, officers were investigating an abandoned dirt bike at a gas station, preparing to impound it. Surveillance video from the business shows a marked patrol car being surrounded by ATVs and dirt bikes circling the officers, throwing bricks and bottles. The patrol car’s windshield was broken and the car was dented by repeated kicks. The chaos was not unique as reports of hordes of ATVs and dirt bikes running traffic lights and driving on sidewalks.

Attacks that use vehicles as weapons are typically reported only when an officer fires shots at the tons of metal speeding toward them and gets criticized for doing so. In New York City, mirroring national trends of an increase in violent carjackings, an officer approached a vehicle she suspected of being stolen. The driver accelerated away, mowing down the officer as the stolen vehicle’s occupants escaped. The stolen car was crashed not far away but the occupants fled and were at large at the time of the report. The officer suffered wounds to her leg and was listed in stable condition.

A South Fulton, Georgia officer near Atlanta responded to a report of a street takeover (where drag racers or partiers claim a section of street and block traffic, often with property damage). The call was a report of vehicles doing donuts, driving recklessly, and doing stunts in the early hours of the morning. As the officer arrived, at least one person jumped onto the hood of the patrol car while another began beating the side of the car with a speed limit sign. Fireworks were shot toward the officer as well. No officers were hurt and they managed to arrest ten persons and impound their vehicles.

In Longmeadow, Massachusetts, the Hampden County Sheriff’s office arrived to serve an eviction notice on Alton King Jr at his $1.5 million residence. Mr. King was not at home, but Rorie Woods, age 55, drove up in her van which held several hives of bees. Woods, clad in her beekeeping suit, intentionally opened the hives, shaking doors and agitating the bees which naturally began attacking officers, some of whom were allergic. Wood resisted arrest but was finally taken into custody. When told that some of the officers stung were allergic to bee stings, her response was “Good.” Woods faces felony assault charges. One official was hospitalized and several others suffered painful stings.

A Gainesville, Georgia officer approached a suspect wanted for eluding officers in a previous pursuit. The suspect, Alexander Perez, was putting gas in a stolen car when the officer approached and asked him for identification. Perez then fled while the gas nozzle was still in the car, causing the nozzle and hose to “clothesline” the officer, striking him on the neck. Officers were able to pursue Perez who was arrested along with a passenger after crashing the car and was in possession of methamphetamine and synthetic marijuana.

These incidents all occurred within a few weeks in one month. Throughout an officer’s life of service, they face threats from baseball bats, concrete blocks, boards, being pushed from high ground, garden tools, explosives, hot beverages, burning cigarettes, arrows, and anything else within a fighter’s reach. Even childish weapons like a handful of sand can temporarily disable an officer and put them at risk. Minor injuries can accumulate over the years to become chronically painful and disabling. It’s bad enough that law enforcement officers have to avoid the knife and gun club, they have to realize they are never far from a weapon that can be used against them.