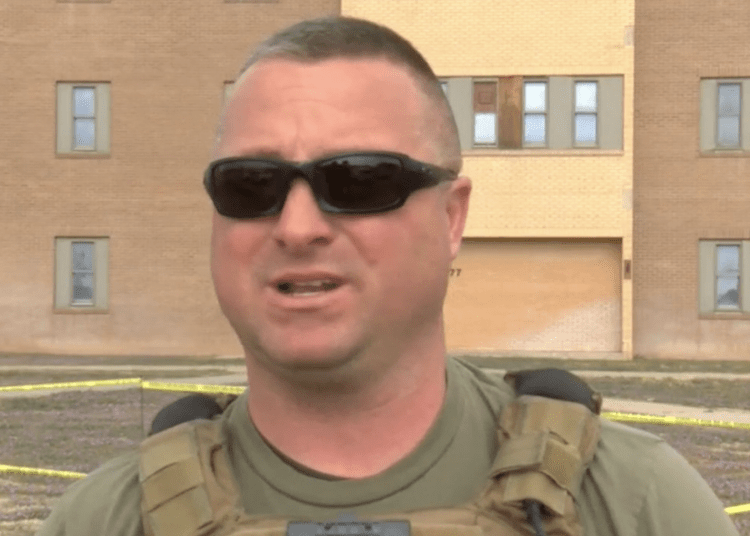 LEVELLAND, Texas — Sgt. Josh Bartlett of the Lubbock County Sheriff’s Office was killed and four additional officers were wounded Thursday afternoon during a gun battle and hours-long standoff in the small Texas town of Levelland, which is about 30 miles west of Lubbock, Law Officer reported. Now a suspect is in custody, authorities said.

Omar Soto-Chavira, 22, was identified as the suspect. He was eventually taken into custody late Thursday night and transported to the hospital with unspecified injuries, according to NBCDFW.

Soto-Chavira bonded out of jail just four days ago after being accused of assaulting family members, KAMC-TV of Lubbock, reported.

Chavira had bonded out of jail four days ago after being charged with assaulting family members. pic.twitter.com/YrEfDEQiB4

The standoff between the suspect and law enforcement had begun at the home around 1 p.m. after someone reported a man as possibly armed along the residential street in Levelland. The confrontation escalated quickly, gunfire erupted as the suspect barricaded himself inside a house, and a standoff ensued.

Media outlets at the scene reported gunfire was ongoing throughout the standoff, and nearby residents were urged to leave their homes. Some who declined to leave were advised to stay at the rear of their houses and stay low, Garcia said.

Sgt. Shawn Wilson of the Levelland Police Department was in critical but stable condition at University Medical Center in Lubbock after surgery, said Chief Garcia. The other three officers were treated for minor injuries and had been discharged from the hospital, he said.

SWAT Team Commander Sgt. Bartlett was a nine-year veteran of the department who had served overseas in the U.S. Army, NBCDFW reported.

Hockley County Sheriff Ray Scifres had said the suspect had a history of contact with police, but specific details were not provided.

Police, deputies and other emergency crews from throughout the region responded to the incident, along with the Texas Department of Public Safety, the Texas Rangers, the FBI, the Bureau of Alcohol, Tobacco, Firearms and Explosives and other federal agencies, Garcia said. The Rangers would lead the investigation after the standoff concluded.

Levelland is the Hockley County seat and a local oil, cotton and cattle center that is home to about 13,500 residents.

Please join Heidi & me in lifting up Sgt. Bartlett and his family in prayer.

And please continue to pray for the brave officers injured in the line of duty today. https://t.co/1HuSTGQ8SN

Lubbock County Judge Curtis Parrish said in a statement that county flags would be flown at half-staff, according to the Lubbock Avalanche-Journal.

“Today, Brenda and I join Lubbock County citizens in mourning the loss of Lubbock County Sheriff’s deputy, Sgt. Josh Bartlett, who was shot and killed in the line of duty today,” Parrish said. “It is with heavy hearts that we send our deepest sympathies to the Sgt’s family, friends, and his brothers and sisters in law enforcement. This terrible loss is a solemn reminder of the risks our brave law enforcement officers face while protecting our communities. I ask all Lubbock County citizens to join us in praying for his family, for healing for the other officers who were injured in the standoff, and for the entire Lubbock County Sheriff’s Department. As a mark of respect, it is fitting that flags at all Lubbock County buildings be lowered to half-staff in his honor and memory.”

Lubbock Mayor Dan Pope said in a statement that he joined the city in “mourning” Bartlett’s “tragic and senseless death.”

“This senseless killing serves as a stark reminder of the danger our first responders face every day,” he added, according to the Journal. “Our thoughts and prayers are with the Bartlett family and the Lubbock County Sheriff’s Department family.”