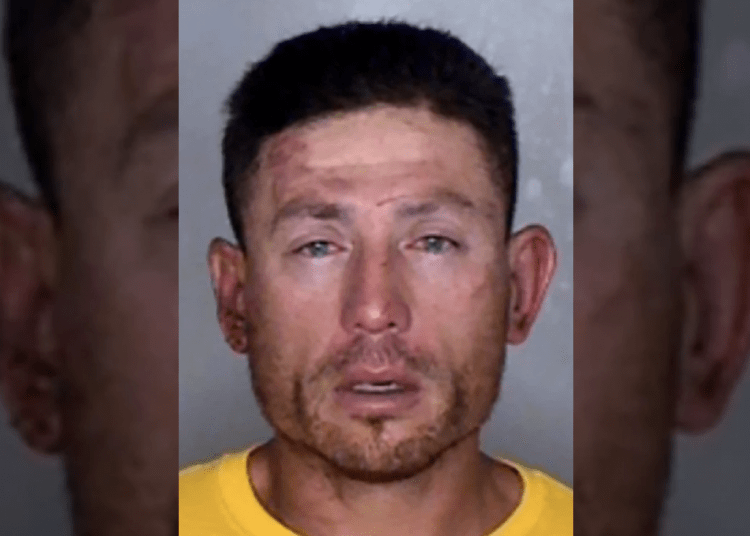 BUTTE COUNTY, Calif. – California jurors convicted a man of murdering three women, and trying to kill two men in a succession of horrific violence. The scope of terror had prosecutors referring to Ryan Scott Blinston as a “serial killer.”

Blinston, 38, encountered three of the victims through his work as a tree-trimmer, according to the Butte County District Attorney’s Office in their Tuesday announcement. The laborer would then return to their residences to murder them.

All five people sustained slashes to their throats in a pattern of violence across May and June of 2020, authorities said, Law&Crime reported.

Slain victim Loreen Severs was 88 and her husband Homer Severs, who survived the attack but later died of an unrelated illness, was 91.

Sandra George, who was a tree-trimming client just like the Severs, was 82.

The remaining people knew Blinston in their personal lives. The DA’s office described Vicky Cline, 57, as an acquaintance. The final victim–the lone surviving person after all this time–was a 50-year-old man who was living with Blinston at a motorhome, according to investigators.

“Butte County Deputy District Attorneys Niels Bringsjord and Mark Emmons called 35 witnesses to testify against Blinston including experts in DNA and cellphone GPS technology, as well as forensic pathologists and an anthropologist,” prosecutors wrote. “Hundreds of pieces of evidence, including photos, diagrams, surveillance videos, phone data, and business records were given to the jury.”

The convicted killer faces a sentence of life in prison without parole. “It is hard to imagine he will receive anything less,” one legal expert said.

BUTTE COUNTY, Calif. — When Ryan Scott Blinston was arrested last year, authorities say he was trying to smash in a door with a hatchet to finish killing a man whose throat he had slashed. That man would have become the fourth victim of Blinston, according to officials who call the Northern California tree trimmer a serial killer. Officials say before a SWAT team arrived to arrest him, he had left a bloody trail in an area where violence is usually about drugs, gangs and domestic disputes, according to reports.

Blinston, 37, of the small city of Oroville in Butte County, was charged on Wednesday with murder, attempted murder and arson. The charges included special sentencing allegations that Blinston used a deadly weapon, attacked an elderly victim and committed multiple homicides, KTLA reported.

Blinston had been in jail since his arrest last year for another attack, to which he had pleaded not guilty. He didn’t enter a plea to the new charges during arraignment Thursday. He was ordered held without bail pending a May 19 court hearing. Some victims’ relatives were in court for the hearing, Butte County District Attorney Michael L. Ramsey said.

Blinston was working for a tree-trimming service in Butte and Tehama counties, north of Sacramento, last May and June when he returned to clients’ homes and slashed the residents’ throats, according to prosecutors.

Loreen Severs, 88, of Los Molinos died and her husband, Homer Severs, 91, survived but died that December of an unrelated illness, authorities said. Blinston broke in the door of their home to attack them, prosecutors said.

Blinston also is accused of killing Sandra George, 82, and Vicky Cline, 57, both of Oroville. He also is charged with torching Cline’s car.

Cline had been living in her car outside a home in downtown Oroville where Blinston had friends and they apparently had talked, Ramsey said. She was last seen with him in June before she disappeared.

“Blood and DNA evidence on and in Blinston’s car was forensically matched back to Cline,” whose body was discovered about two weeks later by a fisherman in the Feather River near Belden, according to a joint statement from the Butte County and Tehama County district attorney’s offices, which filed the charges in Butte County Superior Court, KTLA reported.

Ramsey, a veteran prosecutor of 44 years, said he never had seen anything like the throat-slashings.

The motive for the homicidal rampage remains unclear. There wasn’t any immediate indication of attempted burglary or robbery, Ramsey said.

Blinston had a history of methamphetamine use, and had spent two terms in state prison for driving a stolen car, possessing stolen items and fleeing the California Highway Patrol. He’d been out of jail for several years.

“He wasn’t Public Enemy No. 1, in any sense,” Ramsey said. ”Nothing that would lead one to believe that we had a nascent serial killer in our midst.”

At this point in the investigation, detectives cannot rule out additional victims yet to be discovered.

“We hope to God there isn’t but we can’t be sure,” Ramsey said.

Blinston was arrested last June by a Butte County sheriff’s SWAT team that had tracked him to a motorhome in a heavily wooded mountain area called Brush Creek, where authorities planned to arrest him on suspicion of burning Cline’s car.

He also was a person of interest in George’s slaying, Ramsey said.

Because Blinston had a history of fleeing police, the SWAT team approached quietly before dawn, using night-vision goggles.

“As the team approached the motorhome, they heard the muffled screams of a man inside and loud banging on the outside of the motorhome” as Blinston tried to break in with a hatchet, the district attorneys’ statement said.

Blinston ran into the woods and was captured after a struggle and the use of a Taser, authorities said.

Blinston had gone to the area several days earlier to talk to the motorhome owner, who was a relative of his friends, Ramsey said. Blinston set up a camp with a tarpaulin a little way down a hill.

He wanted to convince the man to grow marijuana on the remote land, Ramsey said.

According to the man, “they drank beer and smoked and shot the breeze and seemed to be getting along fine,” and Blinston would return to his camp at night, Ramsey said.

But on the night of June 13, Blinston asked if he could stay over because he was afraid of bears. The motorhome owner agreed, Ramsey said.

“He falls asleep. The next thing he knows is Blinston on top of him, slicing his throat with what he believed was a knife because he felt the warm blood start to gush out of his neck,” Ramsey said.

The man was stabbed in the shoulder and wrist before managing to push Blinston out the door and lock it, Ramsey said.

He then used his blanket in an effort to stop the bleeding to a 6-inch throat wound, the DA said.

But Blinston didn’t give up. Ramsey said he used a rock to shatter windows, apparently in an attempt to get in and “finish the job” of killing the victim, who used an axe handle to knock away his attacker’s hands from the window and the bottom of the door, KTLA reported.

The man was yelling for help but “there really was no one around” and no cell phone service, Ramsey said

But in a “mind-boggling” piece of luck, the SWAT team was there, Ramsey said. A medic with the team stuffed gauze into the wound to stop the bleeding. The man eventually was airlifted to a hospital and survived the heinous attack.

“There’s no doubt in the world” that they saved his life, Ramsey said.

Blinston faces an exposure of life in prison without possibility of parole if convicted.