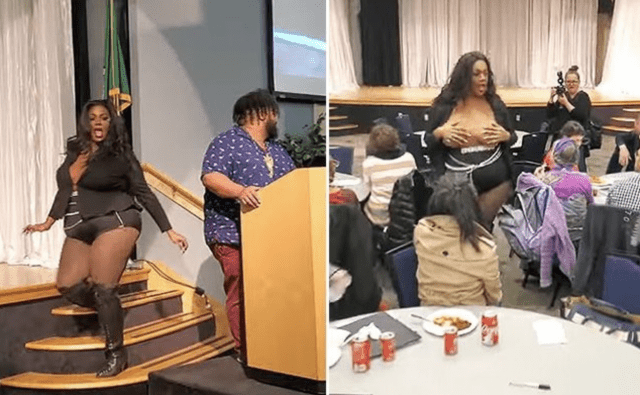 SEATTLE – A Seattle public official has been placed on paid leave after it was reported she hired a transgender stripper to dance topless at her agency’s annual homelessness conference.

Black transgender stripper Beyoncé Black St. James reportedly “danced on tables, provided lap dances, and stripped down to a pair of silver pasties as people threw dollar bills,” at the homelessness conference held on December 9, noted Erica C. Barnett at her website, The C Is For Crank.

Kira Zylstra, acting director of King County’s coordinating agency for homelessness, organized the “All Home” conference at South Seattle College and was placed on administrative leave as an investigation was launched into St. James’s performance.

The theme of the conference was “decolonizing our collective work.”

City and county employees, donors, and representatives of Catholic Community Services, Mary’s Place, and Neighborhood House, were all in attendance at the homelessness event.

Although some who saw the performance called it fun, “fabulous” and a rare opportunity for queer people of color—St James is black— to be represented in the sort of space usually dominated by straight white people, others disagreed, complaining that the show was too “sexual” and forced people to participate in a sexualized performance without prior consent.

The Seattle Times reported St. James’s striptease was referred to in the program only as a “cultural presentation.” But what does a striptease have to do with homelessness?

“No one expected it,” a staffer told the Times. “So I think some people felt uncomfortable.” Anyone with sensibilities should have been able to figure that out.

In a reported email to Barnett, Denise Rothleutner, deputy director of King County’s Department of Community and Human Services, said:

The department is aware of an event that occurred during the All Home annual conference on December 9, 2019.  We have placed the director of All Home on administrative leave pending the results of an investigation into the event and the leadership of All Home. Because there is an active investigation underway, I am unable to respond to specific questions about the event.

Zylstra has led All Home, King County’s coordinating agency homeless services, since January 2018, reported Breitbart. The job of the Seattle public official pays $123,000 annually, according to the Times. However, it could soon become obsolete as Seattle and King County prepare to replace All Home, which has been criticized as weak and ineffective, with a new regional authority on homelessness.