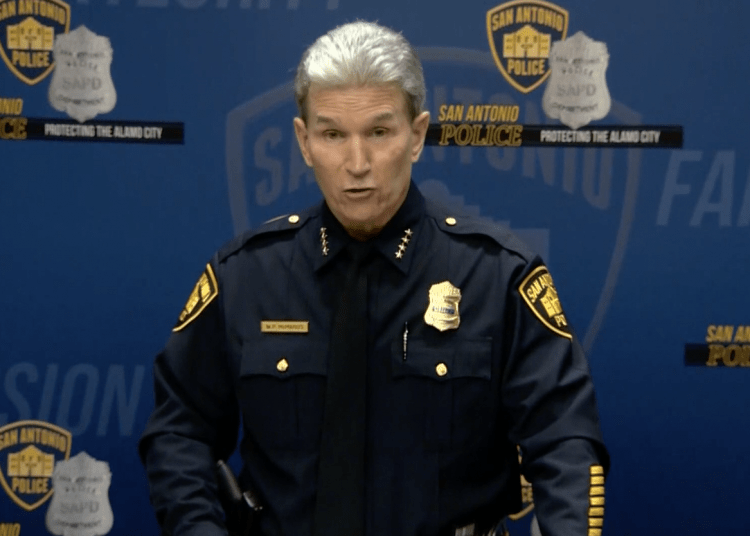 SAN ANTONIO — Chief William McManus of the San Antonio Police Department said a suspect is in critical condition after being shot by police during a domestic violence incident on Monday. Sadly, he also said it appears officers may have unintentionally killed a woman while rescuing her from the hostage situation.

The tragedy occurred Monday, about 9:30 p.m. at an apartment complex in the 3100 block of Roosevelt. SAPD received a call regarding a suicidal man threatening to kill his common law wife. The woman killed was identified as Neida Tijerina, 29, KENS 5 reported.

McManus said Angel Sanchez, 28, — who has a history of domestic violence — told family members that he was going to kill Tijerina and them himself. When responding officers arrived on scene, they discovered the suspect wearing body armor.

Due to the circumstances, police evacuated nearby residents and established a perimeter while calling for SWAT and hostage negotiators.

As the scene evolved, Sanchez was peering out of an apartment window. At one point he came outside and pointed a shotgun at police. The chief said he taunted officers to get them to participate in a confrontation before returning to the apartment.

SAPD tried to get Tijerina to leave the second-story apartment, but she did not want to leave her kids. At one point, Sanchez came outside with an infant, only to go back inside, according to KENS 5.

Sanchez exited the apartment for the final time and pointed a shotgun at officers, McManus said. There were three South Patrol officers on the roof nearby. They opened fire, striking Sanchez. Officers then approached to secure the suspect and clear the apartment.

When officers entered the home, they discovered Tijerina had suffered a fatal gunshot wound.

McManus said an autopsy took place Wednesday morning and physical evidence appears to show police may have killed the mother of three when they shot at the suspect.

“While they cannot yet conclusively state that Neida died as a result of the officers firing at the suspect, the physical evidence appears to support that conclusion,” the chief said.

Sanchez is charged with three counts of aggravated assault on a public servant. An investigation is taking place and body camera footage will not be released because it involved a domestic violence incident, McManus said.