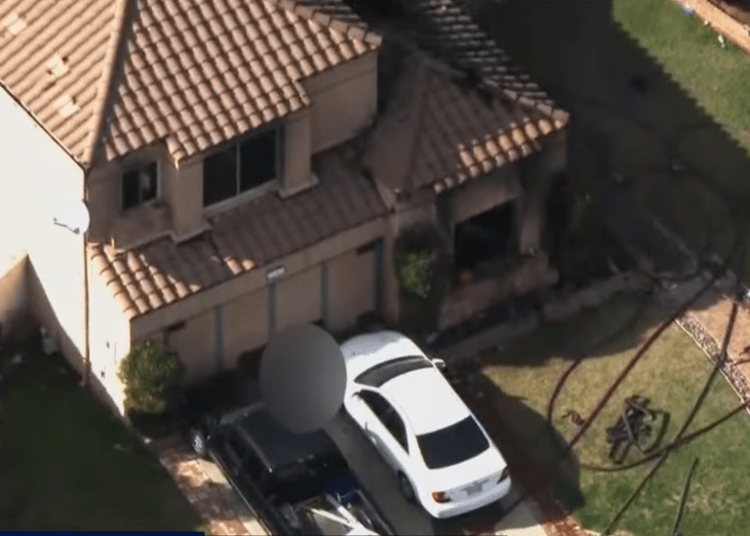 UPDATE: The deceased suspect was identified as Austin Lee Edwards, 28, an ex-cop from Virginia. Read more.

RIVERSIDE, Calif. – A person who is believed to be responsible for killing three people in a Southern California home prior to setting it on fire was fatally shot by sheriff’s deputies hours after the “demonic” series of crimes.

The Riverside Police Department responded to a welfare check regarding a man and woman involved in a disturbance near a vehicle at a residence in the 1000 block of Price Court about 11 a.m. Friday, ABC News reported. The couple involved in the disturbance were apparently gone upon arrival of police.

“Shortly after that, before [officers] arrived, the fire department responded for what appeared to be a fire” at the same location, Riverside Police Officer Ryan Railsback told reporters during a press briefing Friday night. “When they went inside to extinguish that fire, that’s when they discovered the three bodies.”

An adult male and adult female were found deceased inside the home, though police believe they were dead prior to the fire. A third body was also discovered inside the residence, according to authorities. The coroner’s office was still in the process of identifying the victims Friday night and did not have their ages, the news outlet reported.

“They were victims of homicide, although we’re not going to disclose the means of that at this point,” Railsback said.

Neighbors told responding officers that shortly before their arrival, two individuals wearing trench coats and face coverings had gotten out of a red car in front of the house and were involved in a disturbance.

“Certainly, someone went in there with a meaning of force,” Myron Dinga, a neighbor, told FOX 11 Los Angeles. “When two people get out of a vehicle with trench coats on and headgear on concealing their faces, that is a very demonic sign.”

Although details were sparse, the suspect linked to the triple homicide was fatally shot by deputies from the San Bernardino County Sheriff’s Department some distance away in Needles, California, said department spokeswoman Gloria Huerta.

Moreover, the woman involved in the earlier disturbance was later found in San Bernardino County and was “safe” with law enforcement, ABC reported.

The small town of Needles is in the Mojave Desert region of Southern California near the border with Arizona, about 200 miles east of Riverside.

Officers are confident the three victims were murdered, but have not disclosed the manner in which they were killed.

“This is horrific,” Railsback told reporters Friday, according to the New York Post. “It’s the day after Thanksgiving. We don’t know exactly what happened here but we have three people that are deceased.”

“This case is complicated and detectives are still unraveling it,” Railsback told ABC News. “We are hopeful to provide some update in the upcoming days.”