Reality Based Training: It's a State of Mind 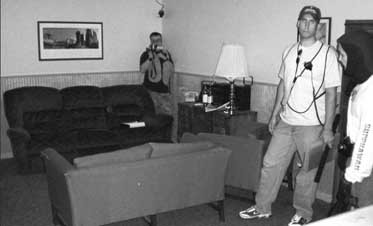 There are two words I hate, says Stu Segall, owner of the Strategic Operations Training Center in San Diego, and those are paintball and moulage. We don t play paintball here, and our casualty simulation is anything but moulage. Segall s training center is described as hyper-realistic training, and for good reason. When you step out into the training area of Strategic Operations, you will likely see everything from a rocket-propelled grenade flying through the air and exploding against a wall to an amputee spurting blood with his leg lying 20 feet from his body. Segall s dedication to the military and law enforcement mission is an inspiration to all of us who strive for excellence in the reality based training community.

But that is another discussion. In this article, I will focus on training environments.

There is a psychological principle known as state-dependent learning. According to the Web site Everything2, State dependent learning is a fascinating and relatively simple-to-understand phenomenon in psychology. Basically, a subject who learns something will best recall their learning when in the same state of mind as when they learned. For example, rats who are given intravenous alcohol and then taught to run a maze will thereafter run the maze better drunk than sober. In the same vein, rats taught to run a maze sober will best perform sober.

What this means to military and law enforcement is that if skills are taught in a contextual setting and are sufficiently stressful without overwhelming the student or ingraining a fear response, the student will have better access to those skills under stressful conditions in similar settings.

There is also what I call the Les Nessman factor. For those who recall the television show WKRP in Cincinnati, the character Les Nessman had an office that was comprised of taped out lines on the floor. People were required to knock on an imaginary door before entering his imaginary office.

The more training participants must use their imagination during a training scenario, the less access they have to the part of the brain necessary for ingraining the skills they learn during the scenario. Part of the value of reality based training is to put participants into a state of mind where they nearly believe that what they are experiencing is an actual event. This is part of the reason training staff must be so well-trained themselves that they can intervene if necessary to keep the role player safe, or to protect the student from potentially suffering traumatic meltdown if things get too overwhelming.

It can happen. I ve personally witnessed a good number of officers over the years who have undergone emotional transformations during scenarios. Some have chosen to leave their law enforcement careers behind after participating in realistic simulations.

Better that it happen in training than in the street where the consequences could prove dire. Not that this is a goal of realistic training, but it is a possible effect. Alexis Artwohl, author of the excellent book Deadly Force Encounters, suggests that simulation training might someday be used as a screening method for new recruits to determine if they have the wherewithal to withstand some of the rigors of law enforcement.

Using realistic settings for scenario training is not only essential, but relatively easy to do if you follow this formula:

Too many trainers are tied to the concept of facility-driven training; i.e., what can I safely do in this facility that I have, and how do I have to modify my student s behaviors to fit this setting? Facility-driven training, while often well-intentioned, can create what Tony Blauer calls training scars that cause students to perform behaviors that might be proper for safety reasons inside the facility, but prove hazardous in combat.

Realistic training facilities are all around you as long as you see them for what they are and take precautions to protect the facility and the participant within the facility. What better place for court deputies to learn the mechanics of gunfighting in a courtroom than in an actual courtroom? Perfectly permissible if you use technologies such as Airsoft for the firearms drills. And what better place to run domestic-dispute scenarios than in a domestic setting? There are plenty of those within a few miles drive if you stay in touch with your community for the availability of abandoned buildings.

And let s not forget the furnishings why have a big empty building when you can furnish the darned thing for less than $100? Neighborhood Services and Salvation Army drop-off centers often have to throw furniture away at the end of the week with all of the donations they receive. And if you do have to buy it, last time I checked I bought chairs for $2 each and beds for $5 each.

If you have a bit of money, you can even purchase specialized foam rubber furniture from Crown Gym Mats who have designed a complete line of foam furniture made out of the same materials as their gym mats. Excellent stuff for ensuring safety when you re going hard with hands-on DT training.

Reality based training requires trainers to look beyond the conventional training settings, taking cues from folks like Stu Segall who have seen the value in preparing those who are heading into harm s way through hyper realistic training settings and situations. With the increasingly difficult mission facing our officers, and the decreasing level of aggressive experience in the recruit population, we owe nothing less than the best quality of training experience and training environment for those whose job it will be to patrol the mean streets of America.

Until next time, train hard and train safe.