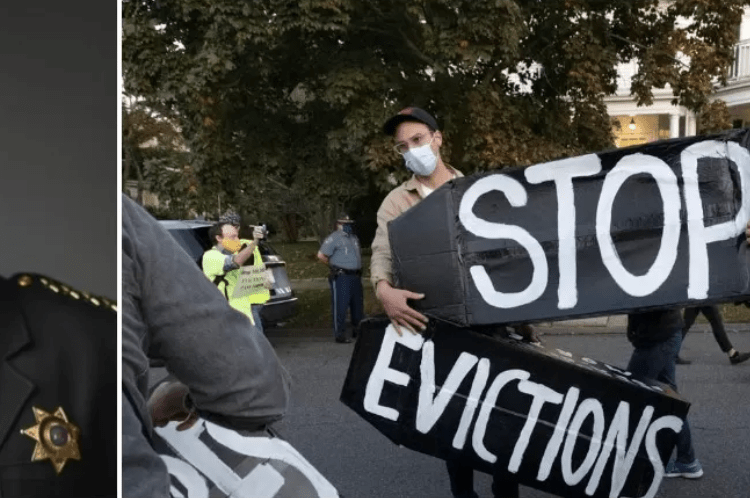 Racine, Wisconsin – The Racine County Sheriff’s Department is accusing the Racine Journal Times of making false statements and engaging in “unethical conduct.” The controversy emerged about reporting into the Department’s enforcement of a federal eviction moratorium.

In a lengthy smack-down posted to Facebook, the Sheriff’s Department wrote: “In no way shape or form did the Sheriff’s Office take any of the positions described by Racine Journal Times employee Scott Williams (as thoroughly explained below). The Sheriff’s Office reasserts their previous question to the Racine Journal Times that it directed at Adam Rogan – Is it that your reporters are unintelligent, biased, partisan . . . or a dangerous combination of the mix?” (Rogan is a local editor at the newspaper)

People responded favorably on the Department’s Facebook thread. “Good for you Sheriff! The media should be called out for trying twist the story to make y’all look bad,” wrote one woman. “Thank you for standing your ground and doing the right thing as always. The Journal Times is a ‘left leaning’ paper that always seems to tell a story their way without any ramifications until now. Thank you,” wrote another.

We’ve reached out to Rogan and Williams to see if they want to comment.

“On today’s date, August 6, 2021, the Racine Journal Times continued with (their) unfounded, unethical, and unprofessional comments when Scott Williams wrote an article entitled, ‘Racine elected officers urge sheriff to comply with federal eviction moratorium,’ and stated: ‘One day after the moratorium was announced, the Racine County Sheriff’s Office on Wednesday said it [would] not abide by the moratorium and would follow through with any evictions that are requested in the county,’” the Sheriff’s Department wrote in a lengthy statement posted to its Facebook page.

“In a written statement, the [S]heriff’s [D]epartment questioned the authority of the CDC director as an ‘unelected’ government official, and noted that ‘duly elected’ members of Congress had just days earlier allowed the evictions moratorium to expire. The [S]heriff’s statement also asserted that a federal order prohibiting landlords from carrying out evictions constitutes an action to ‘take away property.’”

This was followed by a lengthy statement called, “SHERIFF SCHMALING IS COMPLETELY COMMITTED TO UPHOLDING THE LAW.”

This was the Racine Sheriff’s statement in full:

The statement then contained a section called, “Setting the record straight.” It reads:

As stated below and thoroughly explained, Adam Rogan of the Racine Journal Times appears to not know the definition of the word ‘despite.’ The word ‘despite’ means without being affected by; in spite of; notwithstanding; regardless of. The Sheriff’s Office did not state they would act regardless of the eviction moratorium order. Instead, the Sheriff’s Office stated it would act consistent with the moratorium order.

If a judge decides the moratorium order applies to a case, nothing happens. If a judge decides the moratorium order does not apply to the case and issues a Writ of Restitution, the Sheriff’s Office will follow that lawful order. So, the question needs to be asked: Is Adam Rogan acting unintelligently or is he unethically attempting to create a controversy where none exists?

• “The Racine County Sheriff’s Department has stated that they will continue to carry out evictions if orders are approved by a judge” – Yes, that is how the law works!